The Gentlemen (2020): Everything We Know 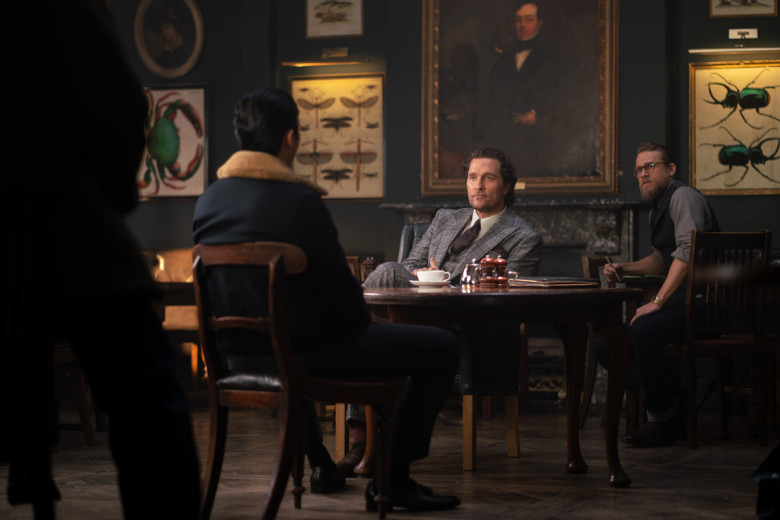 ‘The Gentlemen’ is an upcoming crime comedy that boasts of the perfect recipe for a promising blockbuster. The ingredients that make up this recipe are all present: a stellar cast of talented actors led by a popular A-lister, a seasoned and respected filmmaker behind the camera and a stylishly entertaining premise.

The movie is a British-American production with a tale revolving around a crime lord set in the city of London. For starters, ‘The Gentlemen’ will provide a fresh setting to an epic crime tale of stylish gangsters that has been a popular outing for Hollywood directors and such movies are generally set in the United States, largely due to the popularity of such stories and the country’s history of organised crime.

The Gentlemen Plot: What is it about?

‘The Gentlemen’ follows an American expat, Micky Pearson. In London, Pearson heads a sprawling marijuana dealing business which isn’t short of a drug trafficking empire by any stretch of imagination. However, Pearson decides to retire from the illegal business and cash out. But when word of this gets out, several lowly and powerful people including an Asian gang leader attempt to steal his business from under his nose. The movie promises to be a fast-paced one with numerous plots, schemes, bribery and blackmail.

The Gentlemen Cast: Who is in it?

To say that ‘The Gentlemen’ has a star-studded cast would be an understatement. The movie boasts of several talented actors, led by the American actor Matthew McConaughey.

McConaughey plays the character of Mickey Pearson– the American expat who runs a successful marijuana empire in the city of London and decides to cash out his domain. The actor first gained prominence after appearing in the bildungsroman comedy, ‘Dazed and Confused.’ Since then, he has appeared in several notable and commercially successful movies like ‘A Time to Kill,’ ‘Ghosts of Girlfriends Past,’ ‘The Wedding Planner’ and ‘The Wolf of Wall Street.’ More recently, he appeared on the first season of the crime anthology television series, ‘True Detective.’ He holds an Academy Award for Best Actor for his performance in the biographical film, ‘Dallas Buyers Club.’

Assisting McConaughey as an actor and as the right-hand man of his character, Pearson is Charlie Hunnam. He plays the role of Raymond- a trusted companion of Mickey Pearson who helps him stop numerous takeover attempts from several rivals. Hunnam shot to fame by playing the lead character of Jax Teller on the television show, ‘Sons of Anarchy.’ Since then, he has appeared in several movies like ‘Pacific Rim,’ ‘The Lost City of Z’ and Guy Ritchie’s ‘King Arthur: Legend of the Sword.’ Hence, this will mark his second collaboration with Ritchie. Upon receiving the offer to star in this movie, he said, “When I read the script, it’s sort of vintage Guy Ritchie. I grew up on ‘Snatch’ and ‘Lock, Stock, and Two Smoking Barrels,’ so when he sent me this script and invited me to be a part of it, I just jumped at the chance.”

Moreover, Hugh Grant is also a part of the movie’s cast. According to the movie’s trailer (below), he plays the role of a character who tries to blackmail Pearson and Raymond. A Golden Globe and BAFTA winner, Grant has starred in several blockbuster movies like ‘Four Weddings and a Funeral,’ ‘Bridget Jones’ Diary’ and ‘Cloud Atlas.’ For his career that has spanned over three decades, Grant has received an Honorary Cesar award too.

Other than that, Henry Golding also has a major role in the movie- reportedly that of the main antagonist. He plays a powerful gangster who rubs Pearson the wrong way by attempting to bribe him. Golding is a Malaysian-English actor who is renowned for playing the lead in ‘Crazy Rich Asians.’ Some of his other notable appearances include playing Sean Townsend in ‘A Simple Favor’ and Tom in ‘Last Christmas.’

Moving on, Michelle Dockery plays the movie’s female lead. The British actress is renowned for playing Lady Mary Crawley on the British soap-opera, ‘Downton Abbey.’ Apart from that she has acted in the movies, ‘Hanna’ and ‘Anna Karenina’ apart from the miniseries, ‘Godless.’

Jeremy Strong from HBO’s ‘Succession’ plays a character called Matthew while Colin Farrel plays one named Coach. Eddie Marsan from ‘Jonathan Strange and Mr Norrell’ and ‘V for Vendetta’ is also a part of the movie’s cast.

The Gentlemen Crew: Who is Behind it?

‘The Gentlemen’ is written and directed by the acclaimed British filmmaker, Guy Ritchie. He is best known for his first two feature-length movies, ‘Snatch’ and ‘Lock, Stock and Two Smoking Barrels.’ Both of them were crime comedies that went to receive widespread critical applause. He then went on to direct movies of different genres like the Robert Downey Jr. starrer, ‘Sherlock Holmes’ and its sequel, the live-adaptation version of ‘Aladdin’ and ‘King Arthur: Legend of the Sword.’

‘The Gentlemen’ marks Ritchie’s return to the genre of crime comedy which is regarded as his best. We cannot wait to witness the veteran artist return to his favorite kind of storytelling. His portrayal of British crime stories is unmatched and his style has become iconic and extremely influential to crime capers.

Alan Stewart handles the movie’s cinematography while James Herbert serves as the editor. Miramax holds the distribution rights to the film.

The Gentlemen Release Date: When Does it Premiere?

‘The Gentlemen’ will be released theatrically on January 24, 2020 in the United States. The movie began filming in November last year. It has a runtime of 113 minutes.

You can watch the trailer for ‘The Gentlemen’ below. It was released on October 2, 2019. It presents an apt first look that teases Guy Ritchie’s impeccable command over storytelling and stylish filmmaking apart from nuanced performances by an impressive cast.