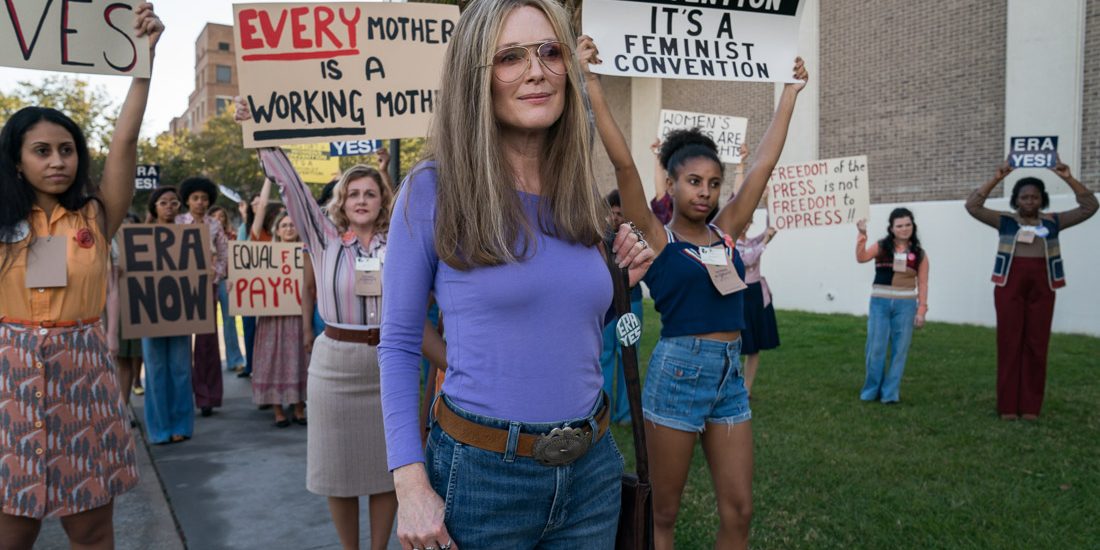 Directed by Julie Taymor and based on Gloria Steinem’s autobiography ‘My Life on the Road,’ ‘The Glorias’ tells the remarkable story of the feminist icon and follows her incredible journey through seven decades across two continents. The film encompasses her childhood, the years she spent in India, and her contribution to second-wave feminism as one of its most influential leaders. ‘The Glorias’ stars Julianne Moore, Alicia Vikander, Lulu Wilson, and Ryan Kira Armstrong as Steinem in various stages of her life.

The film also depicts her interactions with some of the other towering personalities of feminism, including Bella Abzug (Bette Midler), Dorothy Pitman Hughes (Janelle Monáe), and Florynce Kennedy (Lorraine Toussaint). Steinem has led an incredible life, and any project attempting to document it will have to have an epic and sprawling setting. One that is not limited to securing correct locations. The film is essentially a period piece, so the sets needed to be constructed accordingly. Let us find out if Taymor’s eighth outing as a director, ‘The Glorias,’ was filmed on location or elsewhere!

The title of the film refers to four different stages of Steinem’s life and how the movie takes time to fully develop each of them as if they were individual characters. The story is told in a non-linear narrative, shifting back and forth between the titular character’s childhood, teenage, youth, and middle age. The film’s expansive scope required a comparatively large budget ($20 million) for a drama film. ‘The Glorias’ was filmed in Savannah, Georgia; Udaipur, Rajasthan, India; New York City, New York; and Cambridge, Massachusetts.

The movie was extensively filmed in Savannah, Georgia. Multiple casting calls went out for extras as well as actors portraying minor roles. The crew also hired local on-set assistants. Some of the locations used for the film are International F & AM Masons at 912 Drayton St., Sandfly BBQ at 1220 Barnard St., and Levy Jewelers at 2 E Broughton St.

This scene is filming tomorrow and Friday. If you didn't notice, THE GLORIAS have invaded Savannah with filming taking place at Sandfly BBQ and Levy Jewelers yesterday! https://t.co/Y5oVjfzcjM

Some scenes were also shot in Rincon, a city that falls within the Savannah Metropolitan Statistical Area. Here’s an on-set picture shared by Julianne Moore on her Instagram!

Steinem lived in India for two years, and the movie significantly showcases that part of her life. The respective scenes were shot in Udaipur, a historically important city in western India. In the past, Udaipur has hosted productions of films like ‘The Best Exotic Marigold Hotel,’ ‘Gandhi,’ ‘The Fall,’ and ‘The Darjeeling Limited.’

Steinem moved to New York City very early in her career as a journalist and has been predominantly a resident of the city since then. The scenes that cover that period of her life were filmed on location in New York.

A part of the filming for the movie took place on location at Harvard Law School in Cambridge, Massachusetts.

the ‘GLORIAS: a life on the road’ filming has officially started!