The Goldbergs S7 E13: Everything We Know 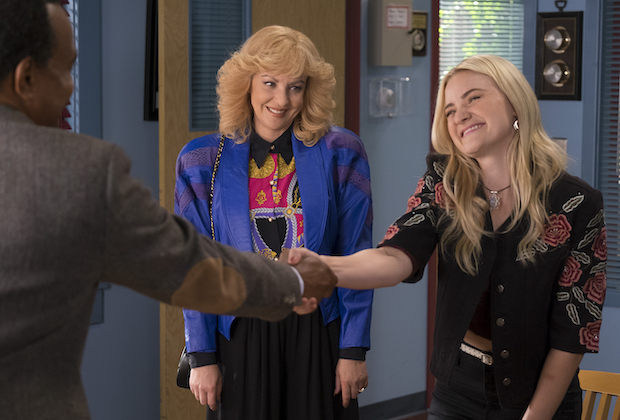 Welcome to the 80s! ABC’s nostalgic family sitcom, The Goldbergs made a much-awaited return with its seventh season in September 2019. The former season (season 6) brings with it many changes for the family, with Erica and Geoff graduating from the JTP, Barry planning to attend college, and Erica going back to school. Beverly Goldberg understands and accepts that the kids are growing up but season 7 reveals that she is not yet ready to quit having some family fun-times when the situation is apt.

The fam heads off for a vacation on their station-wagon and makes stop-overs at motels, small attractions on the way, and even get involved in a crash. On the road trip, Geoff and Erica have their own share of conversations through payphones. As usual, Jeff manages to come out as the good guy in front of Erica’s parents.

The rest of the season continues to follow the Goldbergs as Barry and Erica finally leave for college, Geoff and Erica struggle with their relationship, and Adam is left alone.

Season 7, since its launch has spanned 12 remarkable episodes to date. After its September premiere in 2019, it went on a hiatus after airing its 10th episode on December 11, 2019. The season then returned with its 11th episode on January 15, 2020, followed by the next episode, which aired this week. Now, with episode 12 done and dusted, you must be wondering about the details of the next episode. Read on to know all about ‘The Goldbergs’ season 7 episode 13.

The Goldbergs Season 7 Episode 13 Release Date: When will it premiere?

The official description for the 13th episode goes as follows: “Adam questions his career path of filmmaking when “the other Adam” moves back from Los Angeles and warns him making it big in Hollywood isn’t easy. Meanwhile, the JTP house is in shambles, and Geoff becomes the home manager as they know how much he loves to please and can’t say no.”

Where to Watch The Goldbergs Season 7 Episode 13 Online?

With a cable subscription, you can catch all the episodes of The Goldbergs as and when they air on ABC at the aforementioned time slot. Otherwise, all the released episodes are also available on ABC’s official website.

Live-streaming options include subscribing to any of the following channels – YouTube TV, DirecTV, Philo TV, and Fubo TV. All of the released seasons can also be watched on Hulu or purchased on Amazon Prime Video.

When The Goldbergs made its mid-season premiere with its 10th episode, we meet Beverly who is busy planning a Goldbergs Christmas card family photoshoot with an aim to surpass the Kremps. But of course, as expected, the entire plan backfires. Geoff is all set to be a part of the event but when he realizes, Erica does not want him to be in the photo, he is dejected.

In episode 11,  Beverly realizes that Murray is, in fact, a year younger than they had thought and so she organizes a “do-over at celebrating his 50th birthday”. Coach Mellor tries to prepare an un-athletic Adam to participate in the tryouts for pickleball.

In this week’s episode, the fam is ready for a fun-packed game night. But Geoff tries to hide the details of his living arrangements with Erica and Barry from Beverly. On the other hand, Adam approaches his guidance teacher to seek advice on how to be cool so that he can impress a new girl in his chem class.