The Good Place S4 E13: Everything We Know 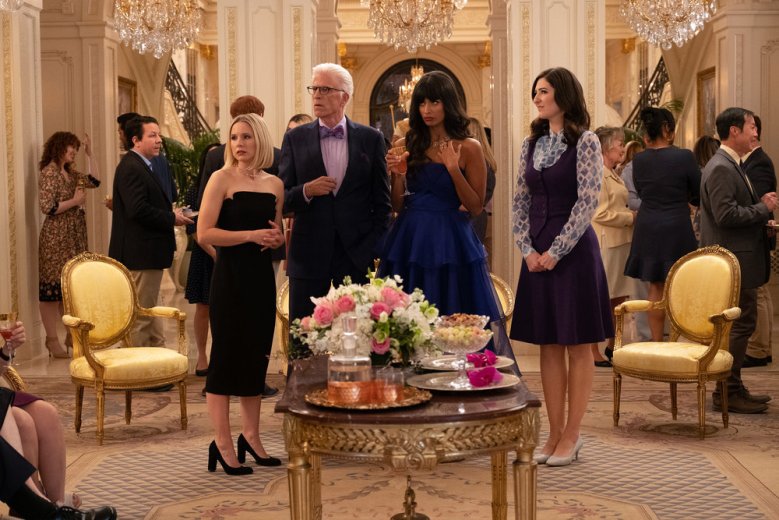 It’s a shame that one of the best fantasy comedies, ‘The Good Place,’ is coming to an end. The fourth season of Michael Schur’s show premiered on September 26, 2019. It centers around the activities of our beloved Soul Squad, comprising Michael, Eleanor, Chidi, Tahani, Jason, and Janet. The team conducts various behavioral experiments in a different neighborhood this time, trying to make each person worthy of a shot at redemption by bringing out the goodness in them.

The show returned from its mid-season break on January 9, 2020. Season 4 has re-instilled our faith in the show, not that it was ever lost but it has giving us the usual tense but not so intense drama; through Cheleanor, we learn how relationships are never perfect but life is all about complementing each other’s imperfections; Jason has evolved in front of our eyes and our man now provides deep insights; and the usual light-hearted fun that we have all grown to love. Also, we get to see our squad finally in The Good Place. Well, the end is nigh and the clock’s ticking but are we ready to let it go?

The penultimate episode 12 landed on January 23, 2020, with loads of endearing moments and a cameo by someone who loves a “smelly cat.” More on that in the recap. So, want to know more about how the final chapter in the books of ‘The Good Place?’ Read on to know the details of the final episode, i.e. ‘The Good Place’ season 4 episode 13.

When is The Good Place Season 4 Episode 13 Release Date?

According to the creator Michael, episode 13 is the best ending they could possibly come up with. In the final episode of ‘The Good Place’, we can expect to see our favorite characters adapting to the life they’ve always dreamed of. Will they finally be happy in the perfect afterlife? The episode might be a service to all the ardent fans across the world with a few cameos here and there. The official synopsis reads, “Various conversations occur, between various groups of people.”

Where to Watch The Good Place Season 4 Episode 13 Online?

You can watch ‘The Good Place’ season 4 episode 13 on NBC at 8:30 p.m. ET. Three seasons of ‘The Good Place’ are available for streaming on Netflix, with the final season premiering on January 31, 2020.

The next option is to stream all the aired episodes on Hulu, if you don’t have a subscription, you can go for a one-month free trial. You can also purchase the latest season from Amazon, or stream them on Fubo TV, DirectTV or watch via VOD on YouTube TV.

In the episode, we see our gang of six approaching the actual Good Place. Everyone is exhilarated, except for Michael who feels that he doesn’t belong to the Good Place. On the contrary, the Good Place committee embraces Michael, making him the new Good Place architect. Too much, too soon, eh?

As Eleanor, Chidi, Jason and Tahani enter the portal together, their welcome bash is a fusion of all of their dreams – where we also spot a bedpan belonging to Stone Cold Steve Austin. Yikes, Eleanor! Chidi gets elated when he sees Hypatia of Alexandria (guest star Lisa Kudrow), but is fused down when she stuns them with, “You’ve gotta help us. We are so screwed.”

Meanwhile, the shady committee quits leaving Michael in charge of the place. But why?

Hypatia reveals that “you become this glassy-eyed mush person” when you get everything you’ve ever wanted. Eleanor realizes how everyone, here, is a happiness zombie. She reminds a dazed and confused Michael: “Every human is a little bit sad all the time, because you know you’re gonna die. But that knowledge is what gives life meaning.” Michael and gang make some changes, which allows the Good Place residents to exit whenever they want. Everyone is happy.