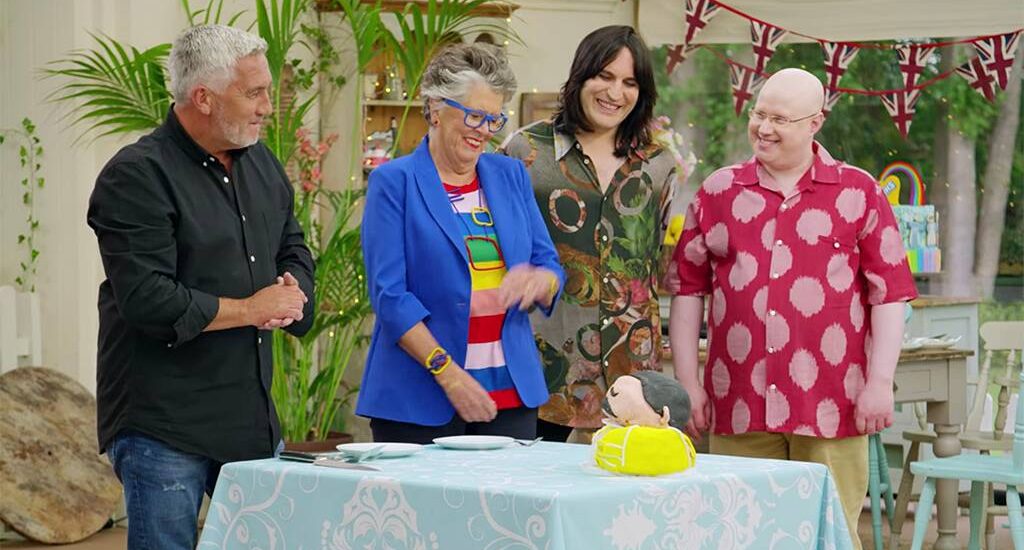 12 contestants, who appear on ‘The Great British Baking Show,’ have to prove their mettle by whipping up some rather fascinating yet challenging baked goodies. Plus, if you’re a fan of the series, then you must already be aware of the fact that in the UK, it is called ‘The Great British Bake Off.’ With a different theme each week, the participants test their skills as amateur bakers in the iconic white tent.

Collection 8 has just kicked off, and the first week celebrated all things cake. The bakers whipped up a Battenberg, six pineapple upside-down cakes, and also a 3D bust of their personal celebrity hero. Judging the show again are acclaimed chefs Paul Hollywood and Prue Leith. We also see comedians Noel Fielding and Matt Lucas appear as hosts.

After one episode, we have seen the first Star Baker be crowned. But we have also witnessed an elimination. There is no monetary prize that the contestants are battling for, but at the same time, they are exposed to the many intricacies of the culinary world through the show. If you’re interested to know more about episode 2, then we have got you covered.

Great British Baking Show Season 8 Episode 2 will premiere on Netflix on October 2, 2020, at 12:00 am PT in the US. Every subsequent episode will also be aired on Friday after its UK release (that happens on a Tuesday).

Following cake week, the second episode of ‘The Great British Baking Show’ will be all about biscuits! (Or cookies, as they are called in the US). We can expect some rather tasty renditions involving chocolate and cream as is apparent from the series’ social media posts. The star of the show may be the (sandwich style) Bourbon biscuit. Usually, it comprises of a chocolate buttercream filling that is enveloped by two chocolate-flavored biscuits. But it would not be surprising to see contestants put their own unique twist on the classic.

This year, the COVID-19 pandemic had definitely hindered the production plans of the show. However, everyone was made to isolate first and then stay on the site so as to prevent the spread of the virus. Clearly, the makers of the show are determined to be cautious yet unyielding in their attempt to bring some sugary goodness on our TV screens.

First, the contestants made a Battenberg. If you are unsure of what this dessert is, then just envision a square being cut into four pieces. First vertically, then horizontally. Now think of the diagonal pieces being of a different color, or flavor of cake, in this case. Now just wrap this arrangement in marzipan. This is the simplest form of the dessert, although multiple variations can be done. It should ideally be very neat. Peter, Hermine, Dave, and Sura really left a strong impression on the judges in this challenge. Next up came the quintessential pineapple upside-down cakes. The technical challenge also had the judges do a blind tasting. Sura reigned supreme in this recreation, whereas Peter came second and Rowan placed third.

The 3D cake bust was the final challenge of the episode. The contestants had to choose a personal celebrity hero and recreate a bust mainly from sponge cake, albeit some other ingredients were also allowed. Rowan presented a chocolate rendition of Marie Antoinette, whereas Lottie made a coconut and lime version of Louis Theroux. There were many other notable recreations such as Linda’s lemon and orange Bob Marley, Mark’s ginger-spiced sponge and coconut cream Charles Darwins, and Laura’s lemon and elderflower Freddy Mercury.

In the end, the most brilliant performance overall was by Peter, and that is why he won the accolade of Star Baker. However, we also witnessed Loriea’s elimination due to over-baking and excessive flavoring. However, Paul did say that he saw a lot of potential in her, and wished he could prevent her from making those mistakes while baking.