The Greatest Performances of 21st Century (Part I): Supporting Actresses 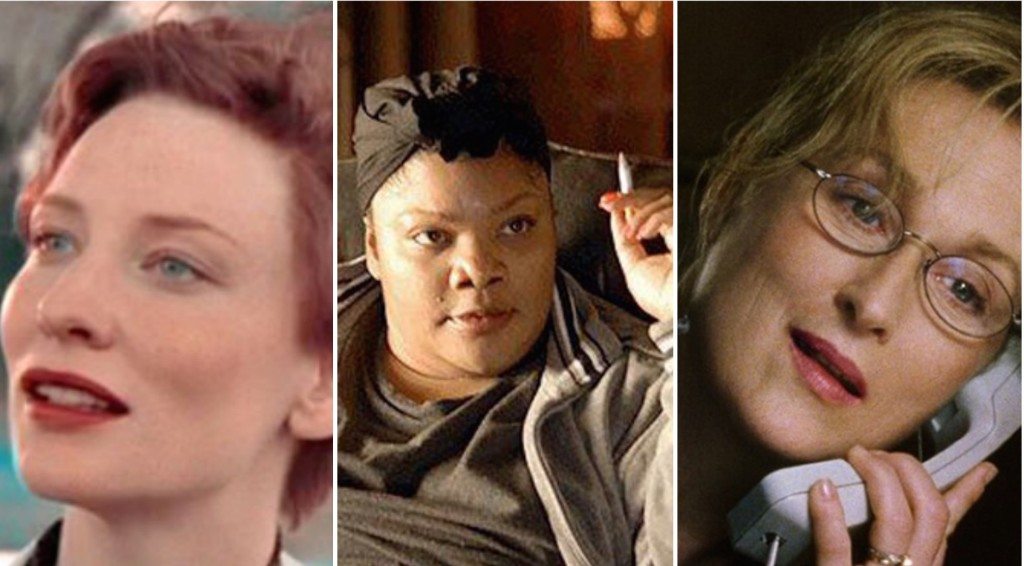 A four part series beginning with the best supporting actresses of the last fifteen years, I hope to bring attention to the truly great performances of the 21st century in the major acting categories. Interesting how some have made the lists twice, interesting how some are there once and never come close to making it again.

1. Monique in Precious (2009) — a terrifying performance in which the actress portrays with shocking realism an abusive mother playing the system for welfare. Ferocious when her money is played with, she is a living hell come to life. Watch her eyes, dead with a long burned out fury and acceptance of her lot in life, and again watch the manner she casually tosses a newborn onto a couch without a thought for the child’s safety.

2. Jennifer Hudson In Dreamgirls (2006) — a stunning performance with Hudson as a gifted singer unwilling to play the game to make it big. She goes it alone, raising a daughter and then attempts comeback with that massive voice. Not since Judy Garland has an actress acted with such expression with her voice.

3. Cate Blanchett in The Aviator (2004) — as Hollywood star Katherine Hepburn, Blanchett does not so much act the role as inhabit it, becoming Hepburn before our eyes. This is no one note performance, she becomes the actress. Imagine the challenge of portraying one of the most recognizable stars on the planet and then nailing it.

4. Meryl Streep in Adaptation (2002) — Genius at work. As a famous writer moving through having her book adapted, she falls into a strange affair with a toothless flower expert in Florida and discovers things she never knew existed. Watch her stoned playing with her toes…perfect.

5. Anne Hathaway in Les Miserables (2012) — for a single scene she deservedly won the Academy Award for supporting actress. Her rendering of I Had a Dream is heartbreaking, and one of the best acted moments in cinema history. Heart wrenching.

6. Hailee Steinfeld in True Grit (2010) — Though it is virtually a lead, she was nominated as supporting and that is where I am leaving her. What a confident, perfect performance this was, sharing the screen, with brilliance, with Jeff Bridges. Sheer perfection.

7. Virginia Madsen in Sideways (2004) — Her monologue about wine might be the sexiest set of words about a beverage committed to the screen, though we know every step of the way even if she does not she is explaining who she is. Sexy, gorgeous, and every mans’ dream, she was superb, the stuff of dreams.

8. Alicia Vikander in The Danish Girl (2015) — As much as Eddie Redmayne drew rave reviews, the best performance in the film was Vikander, brilliant as his understanding though shattered wife. It is a star making performance, stunning to behold.

9. Marisa Tomei in The Wrestler (2008) — As the aging, though striking, stripper who befriends an aging wrestler, Tomei does the darkest and best work of her career. Fearless she captures every scene she is in with a haunting sadness that must be seen. Nakedly vulnerable, she deserved the Oscar for this.

10. Jennifer Lawrence in American Hustle (2012) — Though she has just a few key scenes, she all but burns a hole in the screen with each moment she is on. Powerful, manipulating, confident, fearless and ferocious, she is astounding.

11. Octavia Spencer in The Help (2010) — As the proud black woman trying to feed her family while maintaining her own dignity, Spencer was howlingly funny in The Help, but also brought to the screen a dark sadness as a woman with a terrible secret in her home. The look on her face when she realizes the white people she works for like her is hysterical but all too telling of a time gone by.

12. Jennifer Connelly in Requiem for a Dream (2000) — Though she won an Oscar in A Beautiful Dream (2001) she was never better than she was here as Marion, the heroin junkie who will degrade herself giving sexual favours to men for money or heroin. Her life in ruins it is etched in her beautiful face.

13. Sally Field in Lincoln (2012) — Field gives a profoundly moving performance as the askew First Lady who was known to be slightly mad. Fiercely devoted to her husband, yet never forgiving him for the death of their son, she prowls the background, ever watchful, taking care of Abe.

14. Jennifer Jason Leigh in The Hateful Eight (2015) — A wildly entertaining performance, Leigh is terrific as a beaten, smashed, bloodied, abused woman on her way to be hung, yet actually the criminal mastermind of more than any one of the men realize. You can see her feral intelligence working as she sizes up the scene.

15. Kate Hudson in Almost Famous (2000) — As the wise woman-child Penny Lane in Almost Famous, Hudson brought a wisdom to her role that was shocking, a sense of worldliness of having lived a thousand lives to get to this point in her life. But there was also a little girl there, naive, wounded, who did not know how to get out of the world she was in.