When Will The Kominsky Method Season 3 Premiere on Netflix? 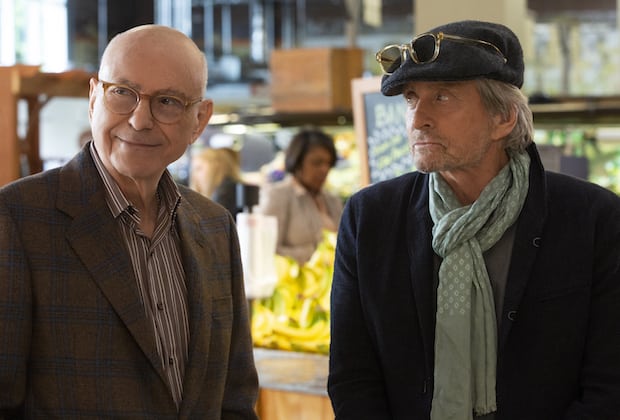 ‘The Kominsky Method’ is an American comedy web series that airs on Netflix. The show first premiered on November 16, 2018. It has been created by Chuck Lorre who is known for popular shows like ‘The Big Bang Theory‘ and its prequel spin-off ‘Young Sheldon‘. The series stars and is co-executive produced by Michael Douglas, the veteran Hollywood actor with films like ‘Fatal Attraction’, ‘Basic Instinct‘, and Oliver Stone’s ‘Wall Street’ to his name.

In this age of postmodern outlook, a constant pace, lack of time, what still bothers man the most, is his aging. ‘The Kominsky Method’ toys with this idea of aging in a fun and frolic manner. Many are of the opinion that after the consecutive successes of his previous shows, Chuck Lorre created yet another very common axiom of life, where an old man’s lost hope is presented in a sugar-coated account of fun and comedy. Naturally, Lorre makes shows of some substance and they are quick to attract viewers. When this is added to the fact that it airs on Netflix, the show’s accessibility increases, which leads to a wider and more global fan base. It is not just fans, but critics also have been drawn to the series. The show has been praised for being filled with humor and showing that it had a heart. Its poignant portrayal of aging is something that’s not common in shows.

After the success of the first season, it didn’t take much for Netflix to renew the show for a second season, which premiered in October, 2019. The question that remains though is: will there be a ‘The Kominsky Method’ season 3? We will delve into that question, but first let’s quickly look into the details of the series.

The Kominsky Method Cast: Who is in it?

The cast of ‘The Kominsky Method’ is led by Michael Douglas who portrays the actor-turned-acting coach Sandy Kominsky. Although his glory days as a successful actor are behind him, Kominsky is a revered coach in Hollywood.

Alan Arkin, famous for films like ‘Wait Until Dark‘ and ‘ The Russians Are Coming, the Russians Are Coming’ dons the character of Sandy’s agent and friend, Norman Newlander. Sarah Baker plays the role of Mindy, Sandy’s daughter who runs the acting studio along with him. Nancy Travis plays the role of a recent divorcee, Lisa, who decides to take acting lessons from Sandy.

Apart from the main cast, the show boasts a very strong supporting cast as well, which has stars like Danny DeVito of ‘It’s Always Sunny in Philadelphia‘ fame. DeVito plays the role of Dr. Wexler, a urologist that Sandy consults about his problem of frequent urination.

In the show is renewed for season 3, both Arkin and Douglas are expected to return to reprise their roles as Norman and Sandy.

The Kominsky Method Plot: What is it about?

We are introduced to the aging Norman and Sandy as they try and navigate their way, and their prostate, in Sandy’s case, through the third act of life. It is a testament to the skills of both these actors that the show can drop something heavy like the loss of Norman’s wife of 50 years to cancer, in the first episode itself, and still make us feel for him even though we are not too involved with the characters.

The show puts on display aging, masculinity and friendship. While the characters are excellent separately, delivering credible rounded performances with emotional highs and lows and well-earned laughs, it is their banter during the shared screen time that is really special. When compared to the other shows by Lorre, ‘The Kominsky Method’ is definitely not as blatantly funny, yet it is more sublime and better executed. The show walks a fine balance between scatology and sentiment, grief and goofiness. However, Lorre somehow does not give the other cast members as much of a spotlight as the protagonists. They seem to be painted with wide brushstrokes as characters.

In season 1, when we last meet Norman, he did not seem to be doing too well, either with the loss of his wife or with old age. In a conversation with Sandy, he betrayed his worst fear that with age he might be losing his mind and Sandy implied that he might not be the only one. In all likelihood, season 2 will pick up on this and then develop it into something more. It remains to be seen if the loss of mind is going to be treated as a literal result of old age, or as an attempt by old-timers to remain relevant in a society that is moving forward quickly without pausing to look back. Overall, the series has already set a high bar, and we hope the upcoming season outdoes itself.

The Kominsky Method Season 3 Release Date: When will it premiere?

‘The Kominsky Method’ Season 2 premiered on Netflix on October, 2019.

As far as the next season goes, we all know that Netflix likes to continue successful shows for at least three seasons, if not more. ‘The Kominsky Method’ won Golden Globe Award for Best Comedy Series of 2018, which is quite a big deal. The show has also managed to impress critics quite a bit. So, considering all the accolades and appreciation that this Chuck Lorre show has managed to receive, it is quite likely that Netflix will bring it back for at least one more season. If renewed, you can expect ‘The Kominsky Method’ Season 3 to release sometime in October, 2020.

While we wait for season 3, here’s season 2 trailer to refresh your memories.