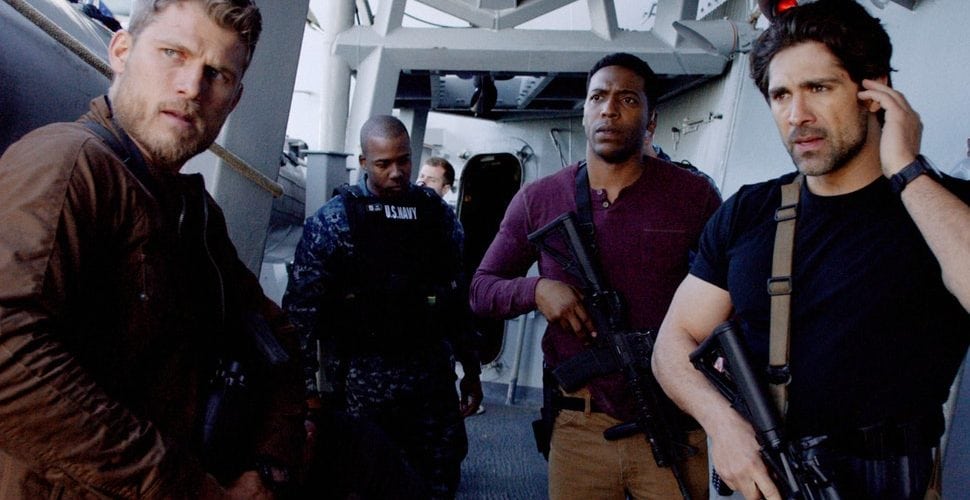 ‘The Last Ship’ is an American action-drama series, loosely based on the 1988 novel of the same name by William Brinkley. It has been created by Hank Steinberg and Steven L Kane, who have worked together before on ‘Without a Trace’. The show airs on TNT and first premiered on June 22, 2014.

The show revolves around a crew of a naval destroyer who have been forced to face the reality of a new existence after they find out that a pandemic has wiped off most of the earth’s population. Even though there have been similar shows before, ‘The Last Ship’ was quick to grab eyeballs, and critics acknowledged that, saying, “Movie-sized action sequences and a pretty cast provide smooth sailing for ‘The Last Ship’, though it’s not anything that hasn’t been seen before.”

The Last Ship Cast: Who is in it?

‘The Last Ship’ does not make any compromises when it comes to its cast. It works on the simple television formula that attractive people hold our attention for longer, and thus we have an extremely good looking roster of actors on our hands when it comes to this show. Let us quickly go through the instrumental characters.

First off, we have Admiral Tom Chandler, the former commandeer of the surviving ship, USS Nathan James, and is now an instructor at the  United States Naval Academy. The character is played by Eric Dane, instantly recognizable from his roles in ‘Charmed‘ and ‘Grey’s Anatomy‘. Rhona Mitra, who people might recognize as the saucy Tara Wilson from ‘The Practice’ and then ‘Boston Legal‘, is seen as Dr. Rachel Scott. She is a paleo-microbiologist, who creates a cure for the virus. Adam Baldwin, who you might recognize from ‘Full Metal Jacket‘ and ‘Firefly‘ appears as Admiral Mike Slattery, a former homicide detective with Chicago P.D. who later commandeers the surviving ship.

The Last Ship Plot: What is it about?

‘The Last Ship’ is set in a post-apocalyptic world where a pandemic has wiped out 80% of the world’s population. The crew of the lone unaffected US Navy Ship with guided missile destroyer, the USS Nathan James, must try to find a cure, stop the virus and save humanity.

Produced by Michael Bay, known for his ‘Transformers‘ series, and for his approach to cinema that relies on pure entertainment, apart from making stuff explode, this series too rides on its entertainment value. When we are introduced to the crew aboard Nathan James, we understand that they have been under orders to maintain radio silence for months and has thus missed out on the societal collapse that the virus has caused. Since they have the scientist who made the cure on board, they are naturally a target for the remaining survivors. Why humanity does not come together even after an apocalypse is never really asked, and who cares anyway, since the show so masterfully manages to maintain the suspense regarding what could happen next. Sure the dialogue is a bit hokey at times, but the show never does try to pass itself off as something in the leagues of ‘Breaking Bad‘.

In some parts of the show, viewers might even get the sense that it is a bit of a long drawn out Navy ad, but with Bay’s love for the military, it is hard to fault the guy for wanting to show off the ship’s big guns. Variety has summed up the show well, saying, “Wedding military hardware and a martial mindset to paranoia about global pandemics, “The Last Ship” is an odd duck — a post-apocalyptic tale with a glimmer of hope, tonally similar to (if not as good as) the late, lamented “Jericho.” It’s left to a hardy naval crew and one inordinately beautiful scientist try to save humanity, without knowing exactly what’s left of it to save. Eric Dane is firmly in square-jawed John Wayne territory as the ship’s captain, on a TNT summer drama with plenty of possibilities but also numerous pitfalls as it seeks to navigate rather treacherous narrative currents.”

If you go in expecting a thinking person’s show which will make you ponder, then don’t watch this. If, however, you want a show that is entertaining, something to take your mind off the summer heat, which is when the show was released, then this is the perfect fit. You do not have to worry too much. All you have to do is focus on the action and the pretty faces of the people aboard the USS Nathan James as they rush to save humanity.

The Last Ship Season 6 Release Date: Will it happen?

‘The Last Ship’ season 5 premiered on September 9, 2018. The bad news for the fans waiting for next season is that even before the release of fifth season, TNT had announced that season 5 will be its last. It remained a solid performer for the network throughout, despite faltering a bit in the ratings towards the end.

Though, fans should not lose all their hopes. There’s still a slim possibility that some other network picks up the show. If that happens, we will update you about ‘The Last Ship’ season 6 release date.

While we wait for any positive news on ‘The Last Ship’ season 6, check out the season 5 trailer below.