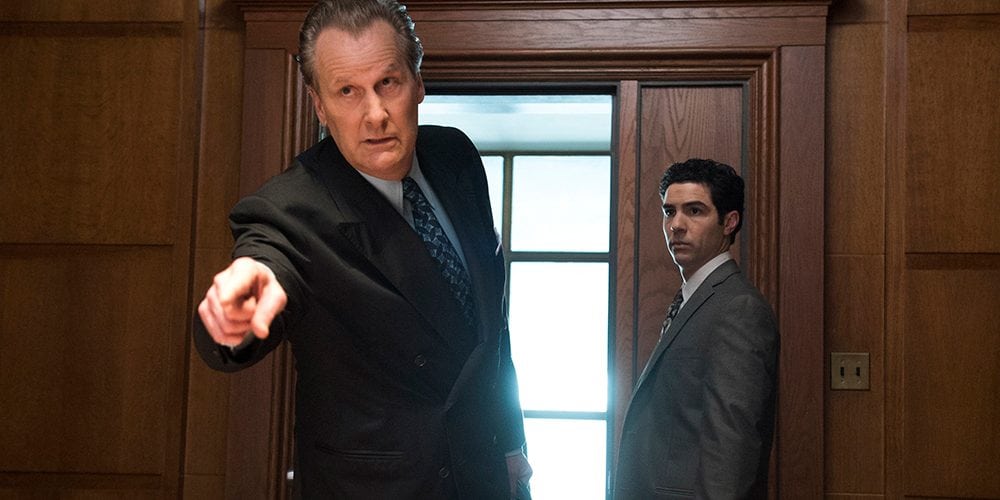 ‘The Looming Tower’ is an American drama web series that is based on the 2006 nonfiction book by Lawrence Wright, titled, ‘The Looming Tower: Al-Qaeda and the Road to 9/11’. The show airs on Hulu and first premiered on February 28, 2018. The series has been created by Wright himself along with Dan Futterman, and perhaps one of the most important documentarians of our time, Alex Gibney, who is famous for works like ‘Taxi to the Dark Side’ and ‘Mea Maxima Culpa: Silence in the House of God’.

The show became an internet sensation with its gritty and realistic exploration of radical Islamic terrorism in the early 2000s. The now deceased kingpin, Osama Bin Laden’s monopoly and influence over global matters take precedence in the narrative of the series. Laden became the most recognizable name in the history of terrorism, after 9/11 attacks, which he masterminded. The show explores the events leading up to the September 11 attacks.

The Looming Tower Cast: Who is in it?

The cast of ‘The Looming Tower’ is led by Jeff Daniels, of ‘The Newsroom’ and ‘Dumb and Dumber’ fame, who stars as John O’Neill. O’Neill was the head of the counterterrorism unit for the FBI and was sure that Al Qaeda was planning to attack the US, but faced opposition from several government agencies, especially the CIA. Speaking of the secretive agency, we see Wrenn Schmidt, from ‘Boardwalk Empire‘ and ‘The Americans‘, in the role of Diane Marsh. She is a CIA analyst under Martin Schmidt, and like her boss, she believes that the CIA is uniquely positioned to stop terrorist attacks. Martin’s role is played by Peter Sarsgaard of ‘Wormwood‘ fame. Schmidt is at loggerheads with John since he believes that the CIA is better equipped at handling terrorist attacks and thus withholds information from the FBI. This character is based on real life CIA Officer Michael Scheuer. Tahar Rahim stars as Ali Soufan, a Muslim Lebanese-American FBI agent on John O’Neill’s I-49 counterterrorism squad who eventually becomes his protégé. Bill Camp as Robert Chesney, an FBI veteran in New York’s counterterrorism unit.

The Looming Tower Plot: What is it about?

‘The Looming Tower’ follows “the rising threat of Osama bin Laden and al-Qaida in the late ’90s and how a rivalry between the FBI and CIA during the time period may have inadvertently set the path for the attacks of 9/11. The series follows members of the I-49 Squad in New York and Alec Station in Washington, D.C. — the counter-terrorism divisions of the FBI and CIA, respectively- as they travel around the world, fighting for ownership of information while seemingly working toward a common goal of preventing an imminent attack on American soil.”

The title of the show itself is significant because not only does it evoke the imagery of the Twin Towers which was brought down by Laden but also refers to a quote in the Quran which Laden quoted not long before he carried out the 9/11 attack. It goes thus, “wherever you are, death will find you, even if you are in lofty towers”. Ironically the same quote came back to haunt Laden in his last days as the US retaliated by raining down hellfire on the terrorist for his attack.

However, this is not a series that deals with the attack itself. It shows the events preceding the attack and we see how the tension builds as the FBI and CIA take radically different approaches in their attempts to fight terrorism. The contempt that the agencies and their heads have for each other is palpable and only made intense by the stunning performances of Sarsgaard and Daniels. It is a tale of systemic dereliction and seems to point at this as one of the causes why Laden was able to attack one of the most secure cities in the world in the first place. The show does not go into what actually happened and its aftermath, because that is something we are all too familiar with. Instead, it asks the question about who saw it coming first.

Variety best sums up the series, saying, “There’s no air of triumphalism informing the story, characters are treated with both skepticism and a dash of compassion, and there are efforts to make victims of terrorism more than props for the protagonists to mourn. Though a chyron at the start of each episode reminds viewers that the tale and people in it have been “composited,” the story does not seem to be unduly watered down. It’s been streamlined but not drained of moral or political complexity.”

The Looming Tower Season 2 Release Date: When is it coming out?

‘The Looming Tower’ Season 1 premiered on February 28, 2018. Advertising any television series as “limited” almost seems insignificant. Any series that is well-received does get renewed for another season, take for example ‘Big Little Lies‘. Due to its universal critical appraisal and strong reception from the audience, it will definitely come back for another season. In fact, Variety reports that the creators behind ‘The Looming Tower’ have already started planning a second season, even though a follow-up has not yet been ordered. Based on everything we know, The Looming Tower season 2 release date could fall sometime in 2021. We will update this section as soon as we have an official confirmation.

Check out the trailer for ‘The Looming Tower’ season 1 below. If you have not seen the series, head over to Hulu to catch all the episodes of the first season.