When Will The Magicians Season 5 Premiere on SyFy? 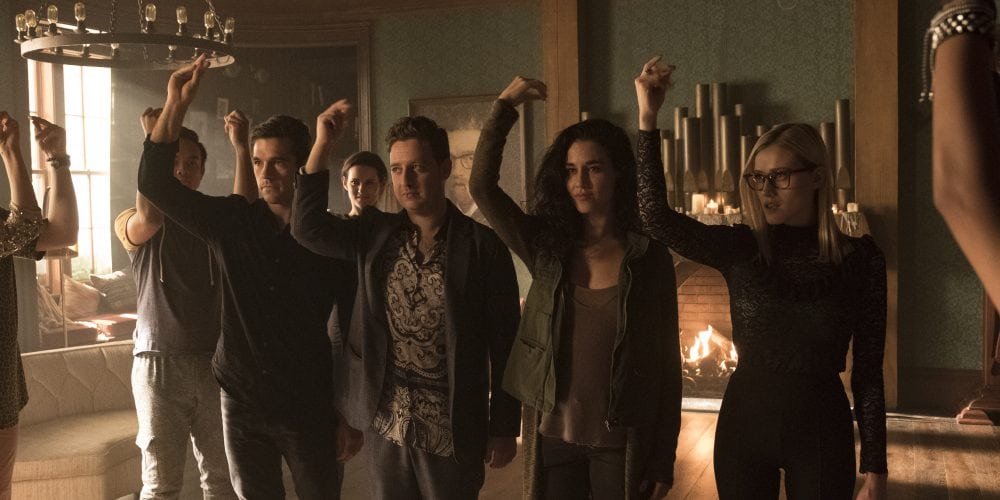 Fantasy has become one of the fastest-growing and most popular genres in recent times, and if you are a lover of this theme, then ‘The Magicians’ is a show you should definitely watch. Created by Sera Gamble and John McNamara, and based on a 2009 novel of the same name by Lev Grossman, ‘The Magicians’ follows a group of misfits who study magic secretly in the real world. However, their fling with magic takes a serious turn when they discover a fantasy world that poses a grave threat to humanity.

Released on the Syfy network, Season 1 of the show first made its way to viewers’ screens on December 16, 2015, and was received favorably by critics and audiences alike. This positive reception prompted Syfy to renew the show for its second season, which premiered a bit more than a year later on January 25, 2017. This time, critics and viewers heaped praises on the series, prompting Syfy to renew it again.

Season 3 premiered on January 10, 2018, and blew critics away, and understandably, Syfy renewed it for yet another season, which premiered in January 2019. Now, fans of the show and critics are all wondering when ‘The Magicians’ season 5 will make a comeback, with its intriguing characters, spells, and its fascinating fantasy world. Here’s everything we know about the upcoming season

The Magicians Cast: Who is in it?

‘The Magicians’ has an ensemble cast with most of the main characters getting almost equal attention. Jason Ralph plays Quentin Coldwater, the main protagonist of the show, and Stella Maeve joins him as Julia Wicker, Quentin’s childhood friend.

Olivia Taylor Dudley plays the role of Alice Quinn, a gifted magician, while Arjun Gupta plays William “Penny” Adiyodi, a talented magician and telepath who is capable of traveling between different worlds. Hale Appleman plays Quentin’s senior and friend, Eliot Waugh, while Summer Bishil plays Margo Hanson (the equivalent of Janet from the novel), who is a close friend of Eliot.

After the finale of season 4, Ralph’s character Quentin Coldwater dies and hence, it’s almost sure that he won’t be seen in season 5. The executive producers released this statement where they confirm this news:

“Before we began this season, we entered into a creative conversation that included the writers, executive producer, and director Chris Fisher, Lev Grossman, our partners at UCP and Syfy, and Jason Ralph. The choice for Jason to leave the show was arrived at mutually, with much respect for the story, fans of the show, and a shared sense of deliberate, essential creative risk.”

Ralph will not appear as a series regular but there’s a possibility of him making a recurring or a guest appearance. However, apart from him, the rest of the lead cast will be reprising their previous roles.

The Magicians Plot: What is it about?

Well, there’s no simple way to explain the plot of ‘The Magicians’, so we’ll jump right to it. The show, in essence, is a mixture of the Harry Potter series (indeed, Lev Gross was inspired by J.K. Rowling), The Chronicles of Narnia, and a good dose of reality. Set in a contemporary world where magic is real, the show follows Quentin and co. after they are invited to, and enroll for the Brakebills College for Magical Pedagogy, where magic is taught to talented individuals who display a knack for it.

Towards the beginning of the story, ‘The Magicians’ introduces viewers to Brakebills, the world of magic, and the main characters in the show. It also introduces another, a completely magical, medieval world called Fillory, and the main antagonist, a character known as The Beast.

As the show progresses, Quentin, Alice, Eliot, and Margo are crowned the kings and queens of Fillory (get the reference to The Chronicles of Narnia?). Charged with the governance of this vast medieval world filled with powerful magic and magical creatures, the show follows the struggles of the four rulers and their friends as they try to govern it with wisdom and fight off the many evils that lurk within it.

Despite the show’s setting resembling Harry Potter and The Chronicles of Narnia, the resemblance ends there. Unlike characters from the two book series, the characters in ‘The Magicians’ are not pure, nor are they completely good or evil. Rather, they are portrayed as morally grey young people with exceptional powers who struggle to deal with their own personal problems and the responsibilities that they bear towards Fillory and their own world.

Whereas as Quentin is portrayed as a magic obsessed youth, he also struggles with clinical depression. Alice, meanwhile, is at the top of her class, but instead of being a Hermione Granger-Esque nerd, she is a mean force of nature. Margo, for her part, is the quintessential fashion queen, who is not a particularly sweet person. Penny, despite his powers of teleportation, has a rather aggressive streak. In a similar way, all the major characters in the show have their own personal problems which they have to contend with as they strive to become better magicians and better people.

Apart from having flawed characters, the show is also replete with relationship drama, unconventional sexual preferences, and other similar facets that give it a very modern feel. As far as the tone of the show is concerned, it’s not all doom and gloom and has a good dose of humor, which sometimes even borders on satire. Further, ‘The Magicians’ also throws some musical episodes into the mix, thereby stimulating a diverse set of feelings among viewers, which range from rage, despair, laughter, and bliss.

In season 4, Quentin sacrifices himself so that he can save his friends. He gets an after-life metro card and walks through a door, leaving fans wondering what could the future possibly mean for the show. Well, the story picks up right after season 4’s finale in the next season.

SyFy has already released a synopsis for season 5, which says: “Last season, magic was saved, but at a terrible cost: the life of Quentin Coldwater, who died heroically to save his friends— and the world. Julia, Alice, Eliot, Margo, Penny and their friends (and frenemies) must learn to navigate a world without him. Now, a new threat has arisen: in freeing magic, the balance tipped the other way and there’s too damn much of it, and as the excess builds, an apocalypse looms. Can the magicians get their shit together to save the world without Q?”

The Magicians Season 5 Release Date: When will it premiere?

A day before the season 4 premiere it was announced that ‘The Magicians’ has been renewed for a fifth season.

Making the announcement, show co-runners Sera Gamble and John McNamara told Variety, “We couldn’t be happier or more excited to conjure another year of magic and all it entails — love, hate, loyalty, betrayal, sex, foul language, drugs, battling gods, monsters and the most dangerous enemies of all: other human beings. We have the best writers, producers, directors, cast and crew in the charted multiverse. Here’s how strongly we believe this: anyone who tries to poach a single one of them will be cursed. And we have the voodoo dolls to do it.”

You can watch the trailer for season 5 below: