TIFF Review: ‘The Magnificent Seven’ is a Respectable Remake of the Original 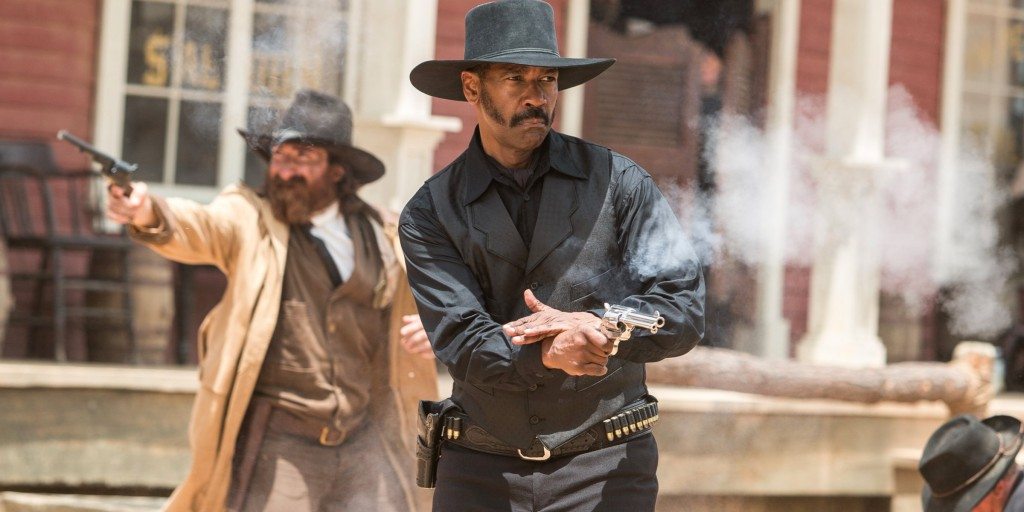 Strains of the famous original score are used like a pulse on the track, just a hint of it connecting the original film to this new one. It is a big, sprawling western, the kind John Ford used to make, with a stunning gunfight sequence that is more battle than straight shoot them up. And it ends with a narration that almost ruins everything that has come before it, but I left the cinema thinking about the movie, and not the goofy last line of narration spoken.

A town is under the grip of terror of mining magnate, portrayed with reptilian relish by Peter Sarsgaard, and when he shoots a young woman’s husband dead in the street; she heads off to find help. Offering her life savings and that of the towns folk, she approaches Sam Chisolm (Denzel Washington), a bounty hunter to help her defend the town. He takes the job, not because of the townsfolk, though they factor in but because of his past, and past dealing with Bogue (Sarsgaard). He gathers his group together, a hot shot young shooter with a knack with dynamite (Chris Pratt), a Civil War sharpshooter who has seen too much killing (Ethan Hawke) his partner in crime, a knife specialist (Lee Byung-hun), an outlaw (Manuel Garcia- Ruflo), a warrior (Martin Sensmeier) and a wise but kooky old tracker (Vincent D Onfrio) and together they ride to save the town and make an army out of farmers.

Bogue descends on the town with an army, but the group fights back to the death in some cases, in one of the longest battles ever on screen.

It is a fun movie, not to be taken very seriously, and clearly the actors had a good time making it. Pratt is fast becoming the biggest star in Hollywood. Washington is quite good, but such kind of performances must be cake-walk for him by now; Hawke is terrific as a haunted gunman who is not sure he still has the stuff, and all the seven but one do terrific work. Only D Onfrio left me shaking my head with a performance that was so mannered, so ACTED I could barely watch him. One part Walter Brennan, speaking in a high pitched voice, one part mountain, he became annoying very quickly. I wonder what the director was thinking letting him get away with this.

The Magnificent Seven does not surpass the original, but it is great fun, and I did love seeing actors on horseback again.