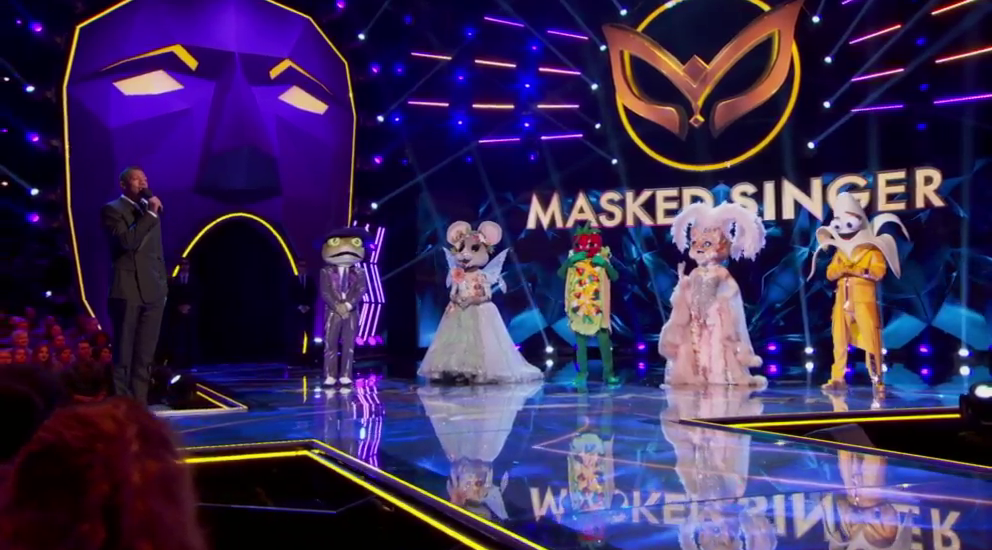 ‘The Masked Singer‘ Season 3 has given us some excellent performances, and jaw-dropping reveals. Currently, the Group B performers have been doing their thing on stage while keeping us guessing with the clues. This episode, we witness the battle heating up among Mouse, Kitty, Banana, Taco, and Frog.

Naturally, you might be wondering about what goes down and who gets eliminated. We have got you covered in that regard, and will tell you when and where to watch the upcoming episode.

The Masked Singer Season 3 Episode 6 Release Date: When Does it Premiere?

‘The Masked Singer’ Season 3 Episode 6 will air on Wednesday, March 4, 2020, at 8 PM ET. The upcoming episode marks the finale for Group B as the three remaining performers will move on to compete with the champions of Groups A and C. T-Pain is the guest judge in the episode.

Where to Watch The Masked Singer Season 3 Episode 6 Online?

Gabriel Iglesias is the guest panelist in this episode, and Banana is the first performer. We see a clock indicating 2:13 while Banana attends a team meeting to discuss his image. We catch a glimpse of cowboy boots, as the performer says that he wants to be his authentic self and the star of his own show. Banana performs Billy Ray Cyrus’ “Achy Breaky Heart”. He also reveals that art was his favorite high school subject, that saw him through some tough times.

Ken Jeong guesses it is Larry the Cable Guy, a blue collar comedian. Nicole sticks with Ed Helms, since she gets ‘The Office‘ vibes. Iglesias guesses it might be Billy Bob Thornton.

Mouse is up next saying the stage is her second home. Visually, we see a rhino statue and a framed picture of praying hands. She says she enjoys a good romance novel, needlepoint, and wine in her free time. We also see her eating nuts. Mouse performs “This Will Be (An Everlasting Love)” by Natalie Cole. She says her favorite subject was maths because her father told her the numbers represented her money.

Jenny guesses it is someone who is legend-adjacent and goes with Tracee Ellis Ross. Jeong makes a guess that it might be Tina Turner, because of the references to gold. Turner sang the song for ‘Goldeneye’. Nicole reads into the religious background and guesses Dionne Warwick. Thicke agrees, saying the reference to gold could be ‘Solid Gold’, a show in which Warwick appears.

Frog takes the stage next, and his clue package is expansive. We see him sitting at a typewriter, where the letters C, S, I are highlighted. We also see a basketball and a star from the Hollywood walk of fame. Along with toy soldiers, Frog makes another Prince reference, saying “Not every Frog wants to be a Prince”. He performs “In Da Club” by 50 Cent. After the performance, Frog reveals that PE used to be his favorite subject.

Jenny guesses Alfonso Ribeiro, reading into the basketball and Prince clue. Ken says it might be Kevin Hart, who likes to stay in shape and recently got a star on the Hollywood walk of fame. Thicke feels it could be Omarion, based on Frog’s dance moves.

Taco is up next, saying he used to be a hothead until the love of his life changed him. We see Gemini highlighted on an astrology chart, and a hairpiece served on a platter. He performs “Bossa Nova Baby” by Elvis Presley. Taco goes on to reveal that he was a class clown, and enjoyed the punishment of being put in a closet for bad behavior.

Jenny says it could be Seth MacFarlane, while Iglesias says it might be Ted Danson. Thicke encourages this, saying the toupee would tie-in with Danson. Jeong goes in a different direction and says it might be Alec Baldwin, who is known for being a ‘hothead’.

Kitty is the final performer, and we see her at a sewing machine, saying she loves making a pillow, or a modern dress for a family member. There is a glimpse of Little Red Riding Hood, as Kitty talks about transformation. She performs Brett Young’s “Mercy”. Kitty’s favorite subject turns out to be English.

Jenny says it might be Millie Bobby Brown, because she can definitely sing, and would fit the frame of the Kitty costume. Iglesias says it is Amanda Seyfried, who appears in ‘Red Riding Hood’, and can sing, as proven in ‘Mamma Mia‘. Jeong actually has a good guess and zeroes in on Sarah Hyland, reading into the rose clue from the last package, and the ‘Modern Family‘ reference this week.

Ultimately, Mouse is sent home this week. The judges make a final round of guesses. All except Ken agree that it is Dionne Warwick. Once the mask comes off, obviously, they are right. Notably, we had guessed the same as well. Dionne explains the clues, where the praying hands refer to her song, “Say a Little Prayer For You”. “Anything Less Than Gold” refers to her time on ‘Solid Gold’. The football players with 19 and 79 on the jerseys refer to her 1979 album, “Dionne”. Furthermore, she is also a Raiders fan and an honorary coach of the team.

Lastly, the nuts in the clue package are Brazilian nuts, referring to the years she spent in the country. This brings the current episode to an end, with a legend being unmasked. Stay tuned for the latest updates regarding ‘The Masked Singer’ Season 3.