Will There be a The Misery Index Season 3? 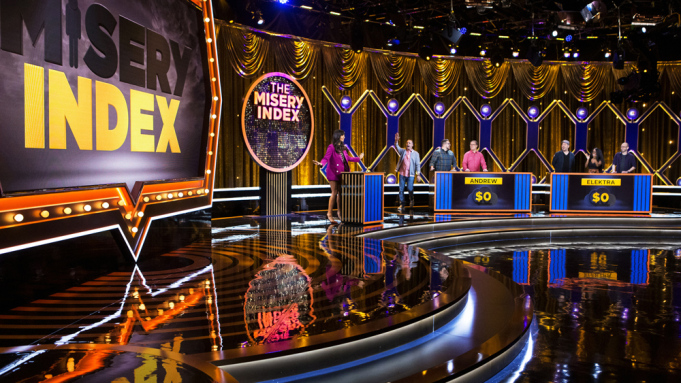 ‘The Misery Index’, which draws inspiration from the card game ‘Shit Happens’, is a rib-cracking-ly funny game show that airs on TBS. Developed by Andy Breckman (‘Monk’ and ‘The Good Cop’), it aims to rank embarrassment, humiliation, and total misery, on a scale of 1 to 100. Owing to its hilarious format, the first season of the series was well-received by fans. As a result, on December 3, 2019, it was renewed for a second season, which dropped in May 2020. If you wish to know more about the future of the show, read on!

‘The Misery Index’ season 2 premiered on May 14, 2020, on TBS. After airing 10, half-hour episodes, it ended on July 16, 2020. This particular game show is a favorite among fans since it leans more toward guffaws than the gameplay. And who does not want to relax while laughing along to silly comedy? This is the exact reason why season 2 enjoyed the same amount of support just like its predecessor. Therefore, we are hopeful that TBS will greenlight the series for yet another season. Once that happens, we can expect ‘The Misery Index’ season 3 to premiere sometime in early 2021.

The Misery Index Season 3 Cast: Who Can be in it?

Jameela Jamil of ‘The Good Place’ fame serves as the host for both seasons of ‘The Misery Index’. She has previously presented ‘The Official Chart’ and ‘The Official Chart Update’. Jamil is joined by none other than The Tenderloins comedy troupe, consisting of Brian “Q” Quinn, James “Murr” Murray, Joe Gatto, and Sal Vulcano. The stars of ‘Impractical Jokers’ had formed their group way back in 1999. They are known for their hilarious performances in several live improv and sketch comedy shows. Both Jamil and The Tenderloins are expected to return for a potential third season.

What Can The Misery Index Season 3 be About?

Based on the card game ‘Sh*t Happens’, ‘The Misery Index’ allows people to win bucks at the expense of the misery of others. Two teams are pitted against one another and asked to rate hilarious and miserable real-life events using the “misery index” — a ranking system created by a team of therapists. Each team consists of one regular participant and two members from The Tenderloins.

The main gameplay is divided into three rounds and the ratings are measured on a numerical scale of 1 to 100 — based on the ‘Three Pillars of Misery’, physical pain, emotional trauma, and long-term psychological impact. Each round gives the option of different cash prizes. While the maximum limit for round 1 is $500, the maximum earning is $1,000 for round 2. In the final round, the winner gets $2,000 and progresses to the bonus round where the value doubles to $4,000. Since the format has essentially remained the same for both seasons 1 and 2, the upcoming outing should also stick to a similar structure.

Read More: Where Is The Misery Index Filmed?