When Will The Moodys Season 2 Premiere on Fox? 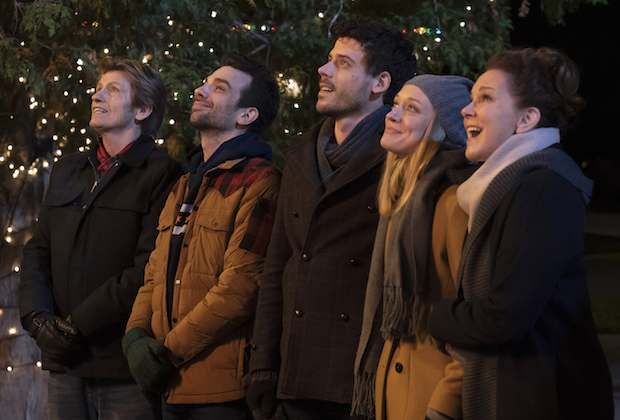 ‘The Moodys’ is a holiday-themed comedy-drama that is based on the eponymous Australian show, which follows a grumpy married couple who reunite with their family for Christmas. The events of the story take place in Chicago and follow a blue-collar, dysfunctional clan as they decide to set differences aside and celebrate the true spirit of the festive season.

The show was originally planned to be called ‘A Moody Christmas’, but later, the name was changed to ‘The Moodys’. Written by Bob Fisher, Rob Greenberg, and Tad Quill, it airs on FOX.

The first season of the series was well-received, with each episode averaging 2.7 million viewers, making it Fox’s sixth most-watched scripted series. Now the question is, will there be a ‘The Moodys’ season 2? Let’s find out.

The Moodys Cast: Who is in it?

‘The Moodys’ features a star-studded cast, led by Denis Leary (‘Rescue Me’) as the family patriarch Sean Sr. and Elizabeth Perkins (‘Weeds’) as the matriarch Ann. Playing the roles of the couple’s adult children are Jay Baruchel (‘Man Seeking Woman’) as Sean Jr. — the eldest child and a “screw-up” still living with his parents; Chelsea Frei (‘Sideswiped‘) as Bridget, the “overachiever” and Sean’s younger sister; and Francois Arnaud (‘Midnight, Texas‘) as the “creative one” and the youngest sibling.

When season 2 happens, all the lead cast members are expected to reprise their original roles of the core Moody clan.

The Moodys Plot: What is it about?

‘The Moodies’, conceptualized as a holiday-event show, is created as a remake of the Australian mini-series with the same name. It is centered around a closely-knit yet dysfunctional five-member, Chicago-based family who come together to celebrate the festive season. However, their reunion leads to several mishaps, with eccentricities and secrets being revealed, ranging from messy break-ups to arrests — all while having to use the same bathroom.

Fox had previously planned on commissioning ‘The Moodys’ way back in 2013 with another writer. However, things did not go as planned and it was relaunched when Bob Fisher, Rob Greenberg, and Tad Quill came on board as writers. And the trio has done a remarkable job in portraying a flawed yet lovable multi-generational clan that gets into a series of chaotic situations. Something on the lines of Netflix’s Dennis Quaid starrer, ‘Merry Happy Whatever’, ‘The Moodys’ has been dubbed as “a very irreverent multi-generational, blue-collar family comedy.”

This hilarious comedy offers a breath of relief when it comes to the regular slate of Christmas-themed programming, packed with cookies, romance, snowflakes, and dreams coming true. Of course, there is love, but it is more about the relationships between family members — bifurcated with witty one-liners and sharp dialogues.

We meet a very normal, working-class Chicago family, whose patriarch is just recovering from alcohol addiction and has his own heating/air conditioning company. Ann, his wife, has resumed education to complete her master’s in psychology. They are pretty excited to spend some quality time with their adult kids — the family black sheep Sean Jr.; the struggling photographer Dan; and the bright Bridget married to a lawyer named Doug.

However, there are some secrets. Sean Sr. is battling an ailment that he has concealed from everyone while Sean Jr. resents everybody. Meanwhile, Dan and Bridget, beneath their perfect marriage, have marital issues. Sean Sr.’s brother Roger and his girlfriend Mukta, alongside Big Stan, complete the other members of the clan. When they come together and the final day of Christmas approaches, we witness how each of these characters deal with their individual issues.

Coupled with fabulous cast dynamics and spectacular performances, ‘The Moodys’ seems realistic — a story that every family in the neighborhood can relate to. Season 2 shall continue to chronicle the dramatic problems of the family. But this time, the events won’t revolve around Christmas. The members will be getting together for another occasion, which can be a festival, a vacation, a baby shower, or maybe marriage.

The Moodys Season 2 Release Date: When will it premiere?

‘The Moodys’ season 1 premiered on December 4, 2019, on FOX. The six-episode mini-series aired over three nights, releasing two back-to-back, 30-minute episodes from Wednesday, followed by releases on Monday (December 9, 2019) and Tuesday (December 10, 2019). The time slots for the episodes were 9 PM and 9.30 PM on all the days.

Although dubbed as a limited series, Fox is planning to continue ‘The Moodys’ as a franchise. According to Fox Entertainment president, Michael Thorn, “It begins at Christmas but isn’t just limited to Christmas. We will meet this family, the Moodys, at very important events throughout their lifecycle that a family experiences together.” The events can be anything — ranging from family weddings to family vacations, funerals, and graduations.

Thorn further added, “Over the course of a year we would visit with this family for two to three six-episode cycles. Christmas would be a standing family event (every year) like it is for many families.” Each episode will tell an individual story but of course, every season shall narrate an interlinked tale. In fact, it is kind of a serialized comedy event, with a beginning and end story arcs.

So, yes, you can expect more seasons from this endearing family sitcom. The anthology format shall obviously see most of the lead stars reprising their roles of the Moody family members. As per FOX, there will also be recurring guest stars in different seasons.

Now, what about a release date? Well, that depends. The concept of the show is to focus on the Moody family gatherings during different occasions, sprinkled across the year. Fox is also ready not to wait until next Christmas to start airing another season. The channel wants to evaluate different timeframes of the year that experience viewership spikes, leading up to the holiday season. So, the series is expected to return sooner, with another six-episode installment. And if everything goes according to plan, ‘The Moodys’ season 2 should most likely premiere sometime in June 2020.

You can check out the official promo trailer for ‘The Moodys season 1 below: