The Nun 2: Everything We Know

The horror movie franchise in Hollywood got a big boost after the release of James Wan’s ‘The Conjuring’ (2013). Yes, he is the same guy who turned mega box office director with ‘Aquaman’ (2018). Anyway, what Wan did well was he really tapped into the horror genre with freshness, solid perspectives and authentic details. It was already a fatigued genre and he conjured up people’s attention, quite literally.

The grand success of ‘The Conjuring’ paved the way for the sequel in 2016, named ‘The Conjuring 2’. ‘The Conjuring 2’ was a success too. The audience particularly liked the intro scene of a cursed nun in that movie. Perhaps Nun Valek became more famous than the movie itself and it was only wise to tell more stories featuring the Nun.

Box office wise as well, it was not a decision that came out of the blue. ‘The Conjuring’ had collected around 320 million dollars upon its release and the sequel too did almost the same business. For R-rated horror films, these are big numbers. The success of ‘The Conjuring’ series can only be matched by the collections of recent ‘IT’ series. The spinoff ‘The Nun’ in 2018 went one step ahead and collected a global haul of 365 million dollars. Despite what the critics say about the new spinoff movies in the Conjuring Universe, there’s definitely a huge pool of audience out there ready to witness the horror movies on the big screen.

The success of ‘The Nun’ last year meant that we will be getting a sequel as well. The makers are really looking forward to expanding the universe. Another spinoff ‘Annabelle’ series is already a hit and ‘The Conjuring 3’ is also confirmed for a 2020 release. So it was about time that ‘The Nun’ also gets a sequel. And that is precisely what happened. ‘The Nun 2’ has been officially greenlit and will be arriving soon.

So let’s talk about everything we know so far above ‘The Nun 2’. But for that, we also have to look at what happened in ‘The Nun’ and ‘Conjuring 2’. Particularly because the stories in the horror franchise tend to follow each other and this one is a shared universe.

The Nun’s Journey So Far 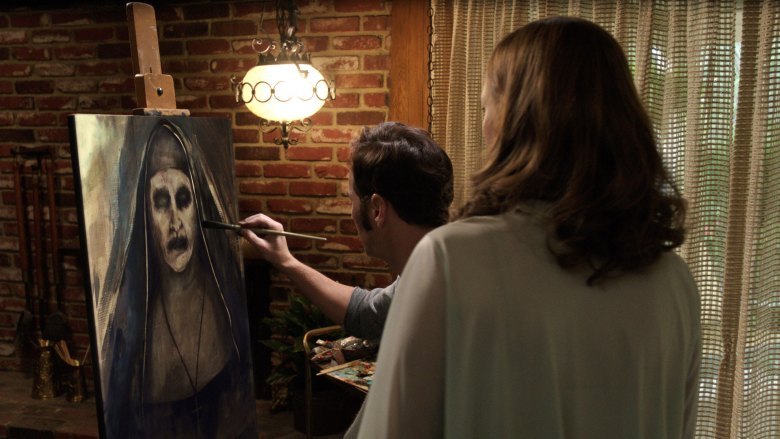 The demonic Nun first made her appearance in ‘The Conjuring 2’. During investigating the Amityville murders, Lorraine witnesses a vision in which she observes a damned nun and also his husband Ed impaled. After their adventures in the first movie, Ed and Lorraine Warren continue to investigate demonic presences.

This tragic vision of Nun terrifies Lorraine. Next, the couple investigates the Hodgson family in the London suburb of Enfield where the children are tormented and possessed by an old man in the drawing-room. Eventually, all the kids and their mother Peggy is influenced by the old man Wilkins’ spirit who just enjoys to torment them because he lived and died in the same house and wants to reclaim it. The Warrens come in and they investigate. Meanwhile, Lorraine bumps on to the Nun again in Ed’s room and this leads to serious fear for Ed’s life. Despite that, they look into the possession of Wilkins and realize that the old man is used as a pawn in order to get full control over Janet by the Nun.

The Warrens return to the Hodgson residence, Ed saves Janet from committing suicide and the nun appears. Lorraine pronounces her name, ‘Valak’ which she had written in her Bible during their earlier encounter and condemns her to hell. The Nun’s chapter closes in that movie as it moves towards establishing the Annabelle setting.

2018’s ‘The Nun’ prominently takes place in post World War II Romania where a demonic spirit terrorizes people. The Vatican sends Father Burke and Sister Irene to Romania to investigate the mysterious suicide of Sister Victoria. They meet a man called ‘Frenchie’ who has discovered Victoria’s dead body. Meanwhile, Frenchie is attacked by a demonic spirit but manages to get away.

The next day the two reach the abbey and Irene enters. She gets to know from other nuns, the traditions of the place and she is also told about the abbey’s history. Irene realizes that the place was built as a castle by a duke who was really into the occult back in the Middle Ages. The Duke summoned a demonic entity through a rift but was killed by Christian Knights who closed the rift with Jesus’s blood. But World War II bombings reopened the rift and the entity has returned. Father Burke identifies the demon as Valek and they try to stop it from gaining power.

Throughout the movie, Valek tries to kill or possess Burke and Irene and Frenchie. As it turns out, the Abbess and other nuns were dead all along and Victoria basically sacrificed herself before Valek could possess her. Realizing the only way to close the rift is by using Jesus’s blood, they attempt to confront Valek. An intense climactic scene proceeds and they successfully close the rift. But the story doesn’t end there. Frenchie’s real name turns out to be Maurice and he was possessed by Valek all along. The story is nicely tied up with the grand narrative of the Conjuring Universe.

‘The Nun 2’ has the possibility to go in either of two ways. The ending of ‘The Nun’ sort of concluded Valek’s story but we know that she’s definitely not done yet. She comes back haunting Lorraine in ‘The Conjuring 2’. So we have more or less 2 decades between ‘The Nun’ and ‘The Conjuring’ and before which the Warrens attempt to exorcise Maurice. Sister Irene from the first movie can be related to Lorraine Warren as well. The possibility is particularly strong which I will discuss later. Anyway, the sequel can look at the time Valek ran loose between all those years, terrorizing and possessing people.

It will more or less feature the time Valek spent in-between ‘The Nun’ and the times of ‘Conjuring’ movies. Valek was seemingly defeated at the end of ‘The Nun’ so her coming back will be interesting to watch. According to the producer, Peter Safran, the sequel has a fun storyline ready for it.

If there’s going to be a sequel to ‘The Nun’, there will obviously be Nun Valek. Which means  Bonnie Aarons will be back as the demonic Nun under all those makeups. The main characters from the first movie including Father Burke and Sister Irene should return as well. That means Demián Bichirs and Taissa Farmiga should return. Coincidentally, Taissa Farmiga is the real-life sister of Vera Farmiga, who plays the role of Lorraine Warren in this universe. That’s why Sister Irene’s relationship with Lorraine can be something to look into. ‘The Nun 2’ can also focus on Maurice prominently since he was marked by Valek in the first movie. So Jonas Bloquet may appear as well.

Since it’s a shared Universe and their interconnectedness can give Marvel Cinematic Universe a run for their money, a few cameos from other popular characters like Lorraine and Ed can be a possibility too.

The Conjuring Universe has already a few movies in the pipeline. In 2019 alone, spin-offs like ‘The Curse of La Llorona’ and ‘Annabelle Comes Home’ have come out. 2020 will have the third Conjuring movie and there’s also the Crooked Man project going on. The universe is super busy now and even though we don’t have any official information regarding it, we expect ‘The Nun 2’ to come out in 2021.