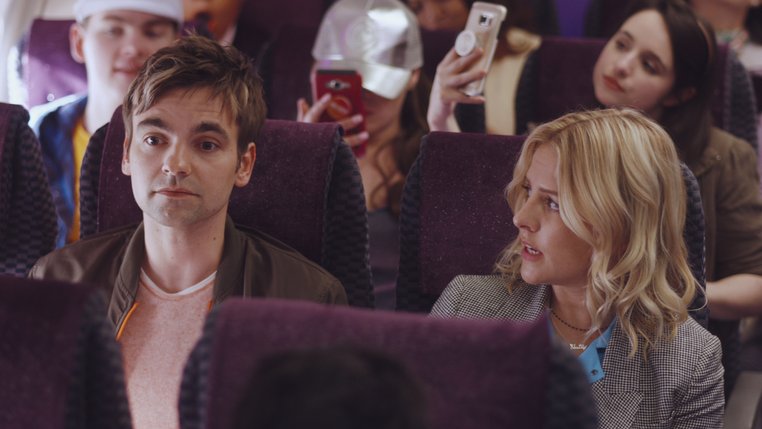 ‘The Other Two’ is a comedy television show that chronicles the life of two siblings struggling to gain a strong foothold in their fields while coming to terms with their 13-year old brother’s internet fame. The scripted series is created by former “Saturday Night Live” head writers, Sarah Schneider and Chris Kelly. The show first premiered on January 24, 2019 on Comedy Central.

The Other Two Cast: Who is in it?

The primary leads of the show are three siblings, Cary Dubek, played by Drew Tarver, Brooke Dubek, played by Heléne Yorke and Chase Dubek, played by Case Walker. Brook is a former professional dancer and the older sister of teenage Chase Dubek. She is seen trying to figure out what she wants to do with her life and has set no goals for her future yet. She has a lover named Jeff. Cary, the oldest of the lot, aspires to be a successful actor but struggles to find perfect roles.

Chase, more popularly known by his stage name, Chase Dreams, is the 13-year-old younger brother of Brooke and Cary. He is an internet sensation who was gained immense stardom after an internet video he posted went viral. Pat Dubek played by Molly Shannon is their mother. The way she behaves, you would think she would set foot in Hollywood any second now. Ken Marino who plays Streeter is hired to be the manager of Chase Dreams.

Richard Kind plays Skip Schamplin; she is Cary’s agent who keeps offering him a variety of weird jobs. Andrew Ridings plays Matt who is Cary’s roommate. He claims to be straight but leaves no opportunity to make sexual advances towards Cary. Other key members of the cast are Beck Bennett as Jeff, Daniel K. Isaac as Jeremy Delongpre, Josh Segarra as Lance, Brandon Scott Jones as Curtis and Wanda Sykes as Shuli Kucerac.

The Other Two Plot: What is it about?

The series revolves primarily around a family of misfits and the wildly comical events that seem to unfold around them. Cary is a struggling actor who finds himself auditioning for weird roles. As the series begins, he is seen preparing for the “Man at Party Who Smells Fart.” His sister, Brook has nothing significant going in her life and is seen struggling to do something productive. Each caught in their own drama, neither could have expected what happens next – their young brother Chase becomes a celebrity overnight after his music video “I Wanna Marry U At Recess” goes viral. With millions of fans drooling over him, news channels are quick to tag him as “the next big white kid.” He hires a management team that monitors every one of his activities and draws publicity campaigns to further his success.

As Chase revels in his new-found stardom, Cary and Brooke learn the hard way that the world that entertains only famous people. The duo buckles under Chase’s success and are soon reduced to being the “The Other Two,” which brings us to the title of the series which is an excellent satirical examination of various day-to-day issues.

“It’s set in this pop-culture world and satirizes a lot of elements of that, but we really set out to make a show about a family,” Sarah Schneider said. “We like the idea that there’s this deep, family issue that they haven’t quite come to terms with, but then having to be thrust into this Chase world, they’re having to deal with it publicly.”

Case Walker whose rise to fame is not unlike his character’s shared how he landed the role in the series. He said, “I think they had been looking for [someone for] the role for a while and then they turned to social media to look for people. They reached out through Musical.ly, actually. Which is really, really cool that’s how they found me. I had been into acting for like six months before that, had just started taking a couple of classes. Hadn’t really done any auditions or anything like that. I happened to be in California when they reached out to me, and I went into the audition. I was kind of like, and I’m going to go in and be myself and do what I know and try to be this character the best I can. It worked out.”

The Other Two Season 2 Release Date: When will it premiere?

The Other Two season 1 premiered on January 24, 2019 and ran until March 28, 2019, on Comedy Central. The first episode of the very first season was watched by more than 2.25 million viewers. It has been reported that females of the age group 18 to 49 are its most avid followers. If you are a fan of this show, then we have a fantastic piece of news for you — the show was renewed for its second season just a month into its first season as was announced on 11th February 2019 during the Television Critics Association Winter Press Tour. Although a release date has not been set yet, we are positive The Other Two season 2 will premiere sometime in January, 2020.

The Other Two Trailer

While we wait for an update on The Other Two season 2, check out the season 1 trailer below.