BBC is the most British network out there, consistently producing high-quality movies and television series which have a firm, English flavor to them. ‘The Pale Horse’ is a mini-series that charms viewers with its sophisticated period setting, British small-town imagery and an engaging murder mystery adapted from a novel by Agatha Christie.

The two-episode thriller/mystery revolves around a series of natural deaths that seem to be linked to a trio of witches. The central suspense revolves around whether the deaths are actually a result of something supernatural or whether they can be rationally explained.

1960: At a village called Much Deeping in Surrey, Delphine Easterbrook asks three witches about the future of her marriage with Mark. Then, the scene changes to one set in the night with the depiction of Delphine dying in Mark’s arms.

A year later, in London, a woman named Jessie shakes with weakness and gets scared when a tuft of her hair falls off. She drops dead while limping on the street. On the other hand, Mark is shown cheating on his second wife, Hermia with a woman named Thomasina Tuckerton. When he wakes up the next day, he finds Thomasina dead and leaves her house without doing anything.

Mark is called to the police station regarding the death of Jessie. A list was found in her shoe mentioning his name and that of another man named Osborne (he is called to the police station at the same time), along with several others. Thomasina’s name along with Mark’s godson, Ardingly’s name is also on the list. Mark tells Inspector Stanley Lejeune that he knows David Ardingly, but does not reveal his connection to Thomasina.

When Mark goes to Jessie’s house, he finds a pamphlet about Much Deeping. He finds a similar pamphlet from Delphine’s old belongings. Delphine’s pamphlet had the name of a certain Oscar written on it. Mark drives to Much Deeping and comes back after reading about an upcoming village fair.

Mark finds a woven item with a ribbon on his car (picture below). Then, Osborne visits Mark’s shop since he found a similar item outside his shop. Moreover, he informs Mark that two others from the list have died. Osborne thinks that the Much Deeping witches are murdering people on the list. Mark makes him leave, finding his suspicion to be irrational. 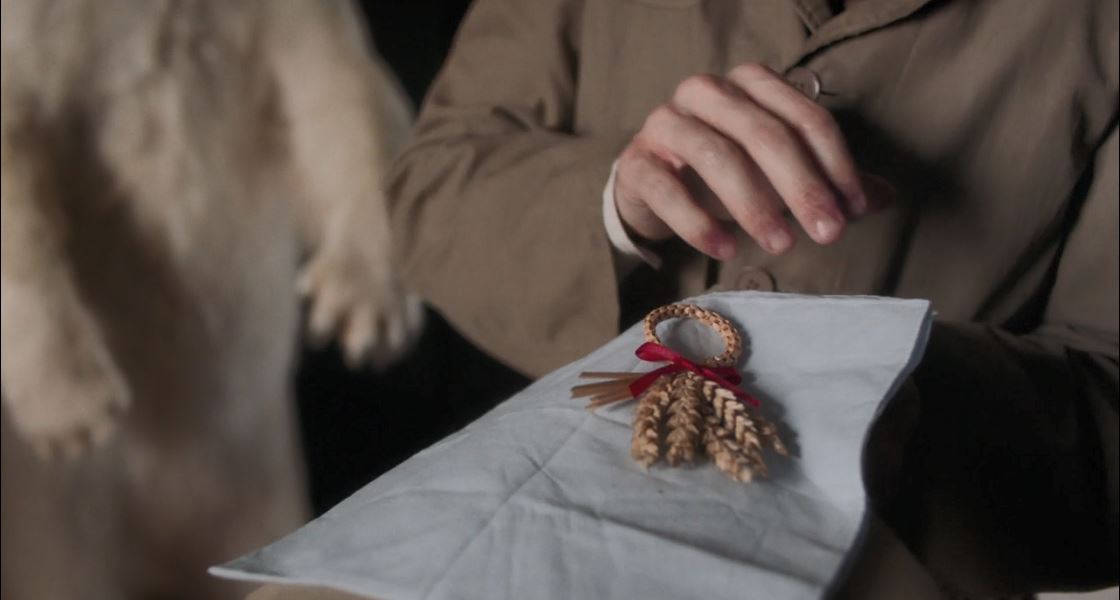 Mark takes Hermia to the Much Deeping village fair. At the fair, an outlandish parade with people wearing scary masks is going on. Mark asks the witches if they knew Jessie. They say they do not. Thomasina’s stepmother finds her dead and arranges for a funeral. The three witches attend it. David Ardingly’s aunt, Clemency Ardingly dies of a heart attack. 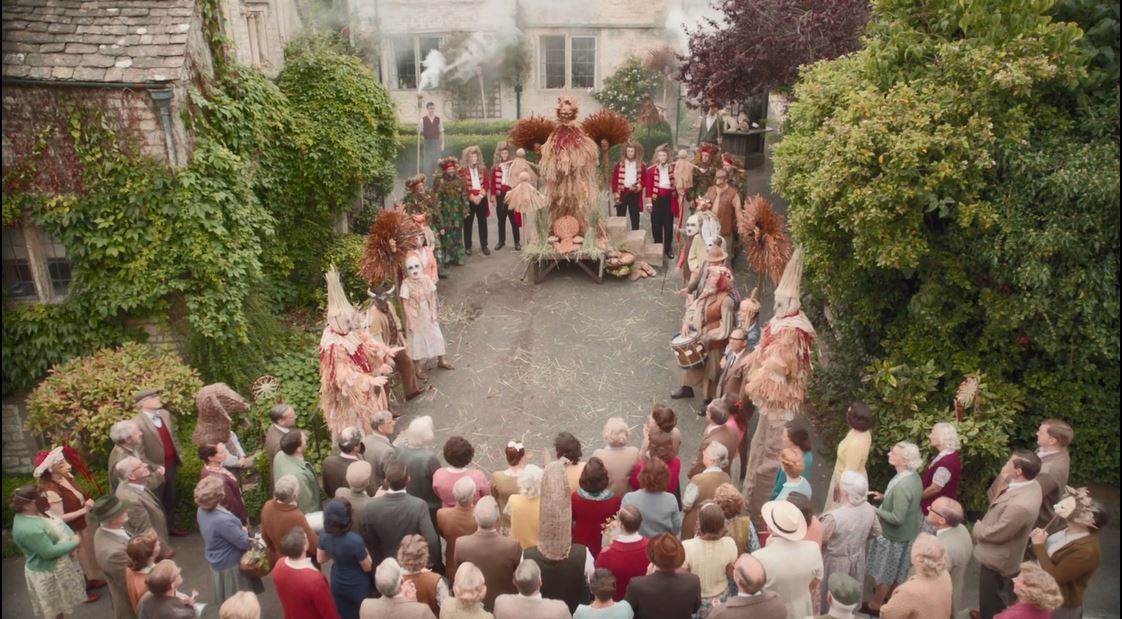 Mark visits Much Deeping again where he meets Oscar, an old man. Oscar tells Mark that he met Delphine when she had come to Much Deeping. He tells Mark that the witches had told Delphine that her husband (Mark) would marry another woman. Then, Mark spies on the witches’ house while hiding. The three witches are in their front yard and turn to look towards Mark’s direction at the same time. Disturbed, Mark sits back in his car. When he runs his hands through his head, a tuft of his hair falls off…

Many viewers might be wondering what the ending of the first episode of ‘The Pale Horse’ signifies. To begin with, the central suspense of the whodunnit revolves around whether the deaths of the people on the list have been orchestrated by the three witches. If so, is there some black magic/something supernatural involved? 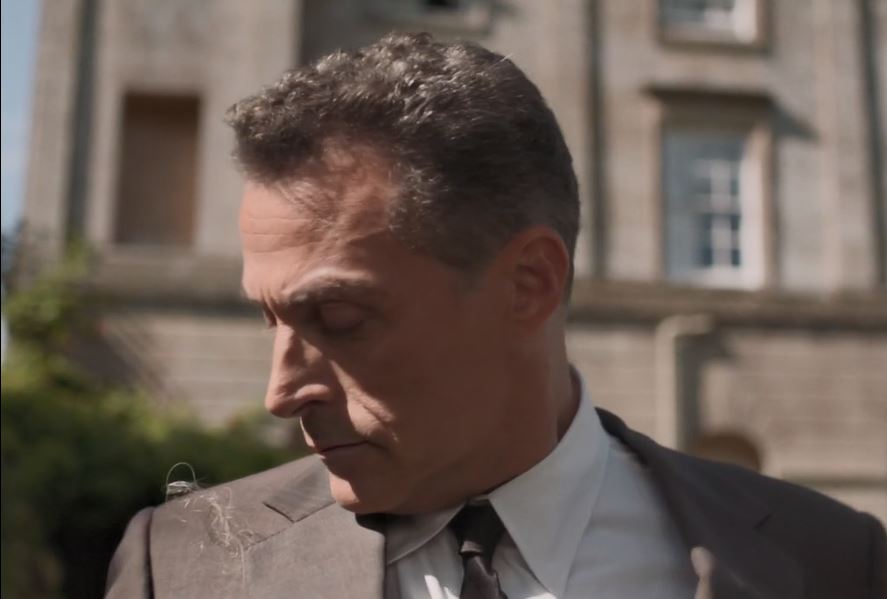 Hence, the last scene alludes to something supernatural or unexplainable going on. It serves to make the viewers believe that the deaths being linked to the witches is a real possibility. It opens up the mystery. After the first episode, the whodunnit is certainly much more unpredictable since the natural assumption of any viewer before starting the mini-series would have been to discredit the involvement of the witches/the supernatural.

The first episode of ‘The Pale Horse’ serves to be an engaging first-half. It sets up the murder mystery quickly and manages to make viewers confused and curious regarding the deaths. Hence, it executes the whodunnit set-up effectively. The most impressive thing about the episode is its pace. Swiftly, the episode manages to advance the plot, develop its characters and maintain the intrigue. The editors and the writers have certainly done some exceptional work.

Apart from that, ‘The Pale Horse’ also lives up to its BBC label with its immaculate portrayal of the 1960s. There are no extraordinarily expensive sets or elaborately executed period references. Still, the production quality is top-notch and one definitely feels transported back in time. The English countryside, a tiny British village, and an upper-class London home are all shown with a seasoned approach. This is the work of a network that has been broadcasting television shows since 1936.

Moreover, ‘The Pale Horse’ does an exceptional job of making itself stand out from other whodunnits. That is no small feat, given the fact that there have been hundreds (possibly thousands) of movies and television series belonging to that genre. It would be quite a task just to count the number of adaptations of Agatha Christie’s works. The possible involvement of the witches/something supernatural is handled expertly. In fact, that is what lends the mini-series its distinctiveness.

Plus, the character of Mark (played to perfection by Rufus Sewell) proves to be a very interesting protagonist. He is a flawed, not-one-dimensional hero that one would root for naturally.