Set in a near-future dystopia, ‘The Platform‘ centers around Goreng’s experiences in a vertical prison structure known as ‘the Pit.’ Goreng first finds himself on level 48, where he meets Trigamasi. The older man introduces him to the workings of the titular platform that ascends from the pit each day bearing a feast, or rather the remains of it.

The rule of the platform is that those below eat the leftovers of those above. Until there is nothing level for those, who reside in the depths of the pit. It is revealed that the feast contains enough for the entire structure, but the food never makes it past even the first hundred levels.

After each month, the people are moved to a different level, which is randomly decided. In order to survive their time in the depths of the pit, people find alternative ways to sustain themselves and often resort to cannibalism. It is also revealed that each individual gets to carry an item with them, which could range from weapons to books to even a dog.

During his time in the Pit, Goreng finds himself on different levels, from the highs of level 6 to the depths of level 202, and is paired up with different individuals, which include the capitalist, Trigamasi, followed by a cancer-stricken woman from the administration named Imoguiri, and ultimately, a black man named Baharat.

Despite his initial disgust, he adapts to the cruel ways of the system and begins to lose his mind. But after Imoguiri’s suicide, when he finds himself on level 6, he teams up with Baharat as they decide to go till the end of the pit through the platform to make sure the food reaches till the end.

The Pit and Class Stratification: 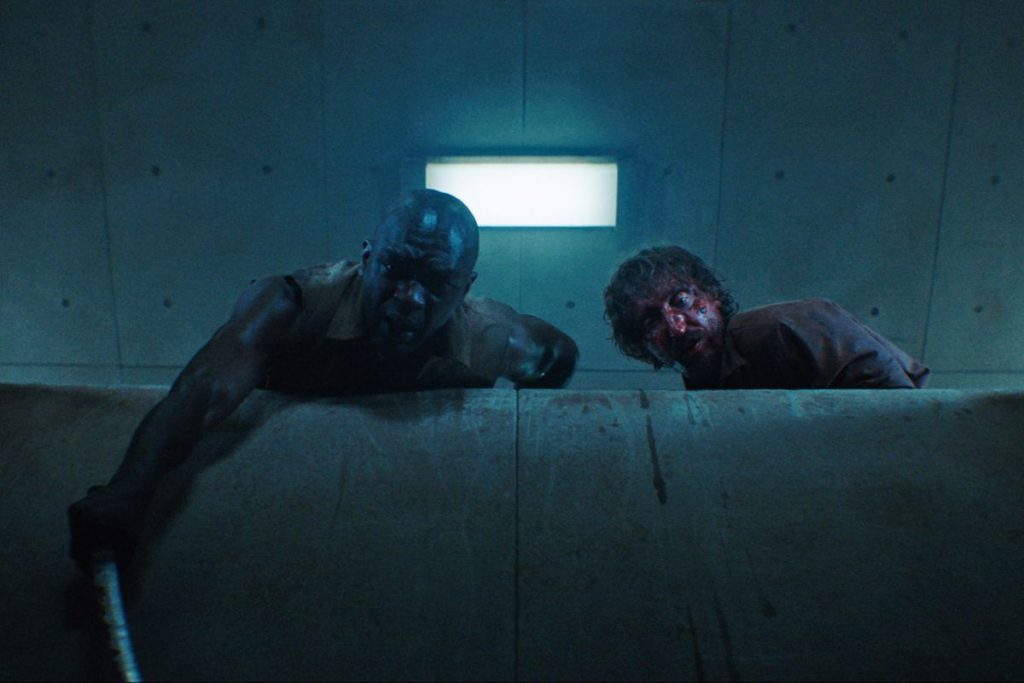 Galder Gaztelu-Urrutia’s ‘The Platform’ serves as a brutal social allegory for the reality of our times. Through the structure of the Pit, the film effectively exposes the horrors of capitalism and class stratification. The different levels of the Pit, then, represent the class divide – with the rich on the top-level and the poor on the ones below.

The film follows a similar concept as the ones explored in ‘Snowpiercer’, ‘Cube’, ‘Hunger Games’, and ‘Parasite’, but it stands out with what it focuses on. While most social allegories of the kind follow Rousseau’s “eat the rich” philosophy, ‘The Platform’ exposes us to the nightmarish reality of the poor forced to devour each other, friends and foes alike. According to Rousseau, “When the people shall have nothing more to eat, they will eat the rich”.

‘The Platform’, however, doesn’t attack the rich; rather, it appeals to our responsibility as individuals who are part of the system. It is a critique on capitalism and our class structure and the role each one of us plays in it. It is no longer a distant reality that separates the viewers from what they watch.

Through Goreng, it makes us aware that we could have blood on our hands. By exposing us to the reality of the dizzying depths of the structure, it makes us question who we would be in the Pit. This is precisely why it becomes important to see the Pit through the eyes of Goreng, who finds himself at different levels.

The film also highlights the selfishness and privileges of our own society. In the Pit, the people are shifted randomly after each month, the ones below could be the ones above in 30 days, and vice versa. However, it being chosen randomly gives one no motivation to be good. This serves as a reflection of our own individual privileges, which more often than not depend on chance. Whether or not we’re on level 6 or 202 depends on where we were born.

Trigamasi, in the film, represents capitalism. This becomes clear with his hilariously brutal backstory involving the Samurai Plus knife. It is also revealed when he jokingly asks Goreng if he’s a communist after Goreng suggests a ration system for the platform. Imoguiri represents the administration, and it is through her character that the film reveals that the system that’s broken.

Ending: The Girl is The Message 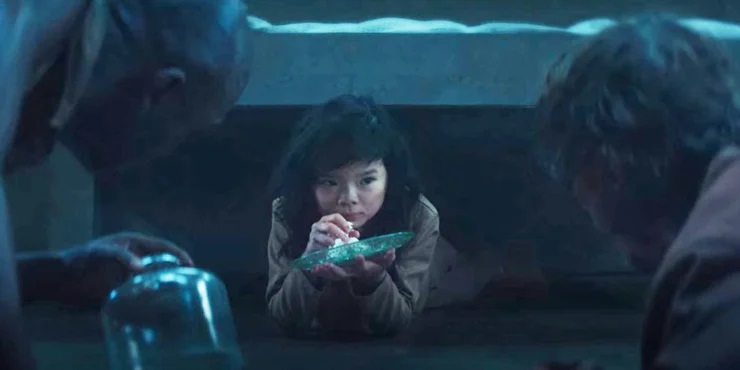 The ending of ‘The Platform’ hauntingly reveals that it is much easier to convince those below, be it through revolution or threats of contamination. But the problem lies with those above who refuse to listen, and above all, the system. While Imoguiri spends weeks convincing the ones below to prepare a ration for those below them, it is ultimately with Goreng threatening to shit on their food, that the people listen.

But Imoguiri’s suicide makes Goreng realize that change doesn’t happen spontaneously. He also realizes that he needs more than just words if he wants things to change. It also becomes interesting that he pairs up with Baharat, a black man, for the revolution. And it is with another older black man’s help that they realize they need to send a message to those above, than convince/force the ones below. While Goreng and Baharat think that the panna cotta would be their message, things change as they reach the final level of the Pit.

The film, in ways, also follows Maslow’s hierarchy – it is much easier to revolt and show solidarity when you’re at level six. But how would you do the same when you don’t have enough for yourself, and are left to starve? It is only once your basic needs are fulfilled that you can reach self-actualisation in any way. But for that to happen, the system needs to provide to all equally. In an interview, Galder Gaztelu-Urrutia’s revealed the direct message of the film, “…At a certain point in time, humanity will have to move towards the fair distribution of wealth.”

When Goreng and Baharat reach level 333, they find a young girl living alone, Miharu’s daughter. It is at this point that they realize that the girl is the message, and not the dish. Also, it is important that all of the information that Imoguiri gives Goreng is false. The fact that she stated that they were only 200 levels in the Pit, and that no one under the age of 16 resided in the Pit, reveals that system itself is broken.

The unnamed young girl represents both a sense of hope as she is the future, as well as the haunting reality that children are at the lowest levels of the actual pit in our system. Thus it becomes important that the girl goes above as the message, alone, while Goreng stays back. A vision of Trigamasi reveals to him that “the message needs no bearer”. His work here is done. The film also makes use of several motifs, including Goreng’s Don Quixote, and him being a messiah-like figure. It makes sense then that he sacrifices himself for a better future for others.

Goreng’s visions of Trigamasi, Imoguiri, and eventually Baharat, become important as they reveal his sins, as well as the sins of everyone who resides in the pit. The ending becomes symbolic as Goreng walks into the darkness while the girl on the platform elevates towards light. While the conclusion does not reveal if things do change, it urges us to at least step up.