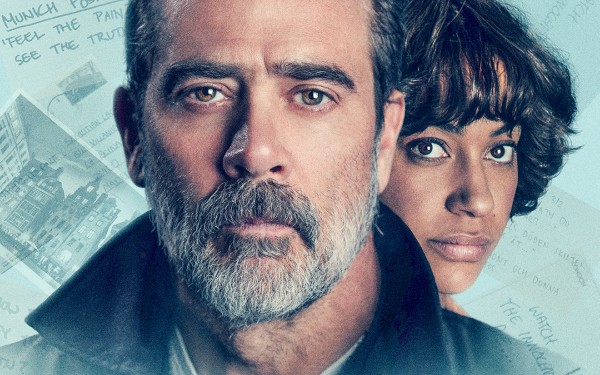 Directed by Bosnian filmmaker Danis Tanović (‘No Man’s Land’, ‘Tigers’), psychological crime thriller ‘The Postcard Killings’ revolves around Jacob Kanon (Jeffrey Dean Morgan), an NYPD detective who embarks on a search across Europe for the person(s) responsible for the murder of his daughter and her husband. Set against the varying and exotic backdrops of various prominent European cities, the film offers a riveting insight into the human psyche and explores the concept of morality and the value of art. SPOILERS AHEAD.

‘The Postcard Killings’ is the cinematic adaptation of James Patterson and Liza Marklund’s 2010 novel ‘The Postcard Killers’. The film opens with the gruesome deaths of Kanon’s newlywed daughter and her husband, whom he had sent to London for their honeymoon. Their blood has been drained out, and their bodies have been dismembered and posed in such a way that is later revealed to be resembling a famous art piece. Kanon and police officers involved in the case discover that this is a work of a pair of serial killers who are traveling across Europe killing young and happy couples. The first deaths occur in Madrid, followed by the deaths of Kanon’s daughter and her husband. Soon after, similar killings are reported in Munich, Brussels, Stockholm, and Amsterdam. Before arriving in each city, the killers send a postcard to a local journalist, in which they offer a hint to the artwork they are emulating.

Parallel to Kanon’s journey to find his daughter and her husband’s killers, a young American couple’s travel across Europe has also been shown. Sylvia and Mac Randolph (Naomi Battrick and Ruairi O’Connor) appear to be on their first travel in Europe together. She likes to collect receipts, even if they belong to other people. She and Mac meet a mysterious co-passenger named Pieter (Dylan Devonald Smith) on a train. As they start feeling uneasy around him, they get off at the next station. However, their paths cross again and Pieter introduces them to his wife, Nienke (Sallie Harmsen).

The main plot of ‘The Postcard Killings’ is about Kanon’s quest for the murderers. So, the parallel storyline of Mac and Sylvia seems a bit jarring until we realize that we are being given a glimpse into the journey of the serial killers themselves and how they ensnare their victims. Tanović masterfully keeps us suspecting Pieter as the serial killer throughout the entire first half of the film. Not long after his wife is introduced to the Randolphs, Kanon and the law enforcement officers deduce that the killers are working as a pair, seemingly reaffirming our suspicion of Pieter, and now Nienke as well. It isn’t until their bodies are discovered that we come to know that Mac and Sylvia are the real perpetrators. And even then, there is still a hint of doubt in our minds as they both seem extremely convincing during the interrogation.

‘The Postcard Killings’ is not really a whodunit. It never really pretends to be and reveals who the real killers are about halfway into the film. Instead, the movie focuses on the psychological reasons that might turn a formerly innocent child into a manipulative psychopath. The film also attempts to deliver an intellectual commentary on the definition of art.

Right after his daughter’s death. Kanon’s grief becomes so all-consuming that he begins to drown himself in alcohol. It is only after his estranged wife Valerie (Famke Janssen) rushes into his apartment and throws the liquor bottles into the trashcan, that his downward spiral stop. He continues to have these bouts of profound sorrow when he either breaks down crying or lashes out angrily at the police officers working in his daughter’s case. He is helped by Dessie Lombard (Cush Jumbo), an American expatriate in Stockholm, who writes a cultural column in a local news outlet about her experience in Sweden. She is the one who receives the notecard from Mac and Sylvia before they arrive in Stockholm.

While Kanon chases after the young couple on a killing spree, Valerie embarks on a search of her own to find everything she can about their background. She learns that Mac is actually Simon Haysmith, the son of Simon Haysmith Sr., who is an infamous embezzler currently in jail for stealing $300 million from his clients from Wall Street. It is his son’s testimony against him that has led to his imprisonment. Valerie goes to meet Simon Sr. and quickly figures out what kind of man he is and what type of parent he was to his children. Her suspicions are later confirmed by the family’s neighbor. He used to beat his children, especially his daughter Marina. After Kanon and Lombard are given this information, they realize that Marina is the same person as Sylvia.

It appears that Simon and Marina are in an incestuous relationship, and their father tried his best to put a stop to that. There are multiple references in the film to Francisco Goya’s painting ‘Saturn Devouring His Son’. Marina compares Haysmith to Saturn and states that he has devoured their innocence. The killing spree that she and Simon have embarked on is essentially a form of rebellion against their father’s control. It is their father who taught them everything they know about art. And by recreating well-known artworks with the bodies of their victims, they are demonstrating their rage and demand for understanding.

After Lombard publishes an article on the killings, hoping to draw a response from Marina and Simon, it has its desired effect. They email her, thanking her for understanding their reasons. They also choose her as their final victim. She and Kanon arrive in Helsinki chasing after the young serial killers, who start stalking them the moment they land in the city. They manage to kidnap Lombard and are preparing her for the murder in a roadside snowy field when kanon arrives and shoots Simon. He subsequently dies in Marina’s arms.

It is later revealed that there was no blood relation between Simon and Marina, as they were both adopted. Haysmith made specific demands about what type of children he wanted, which Kanon refers to as “early genetic engineering at its finest.” Neither of their bodies is recovered. However, just before the film ends, someone calls Haysmith in the prison, and it is Marina. She is very much alive and likely to come after her father now.