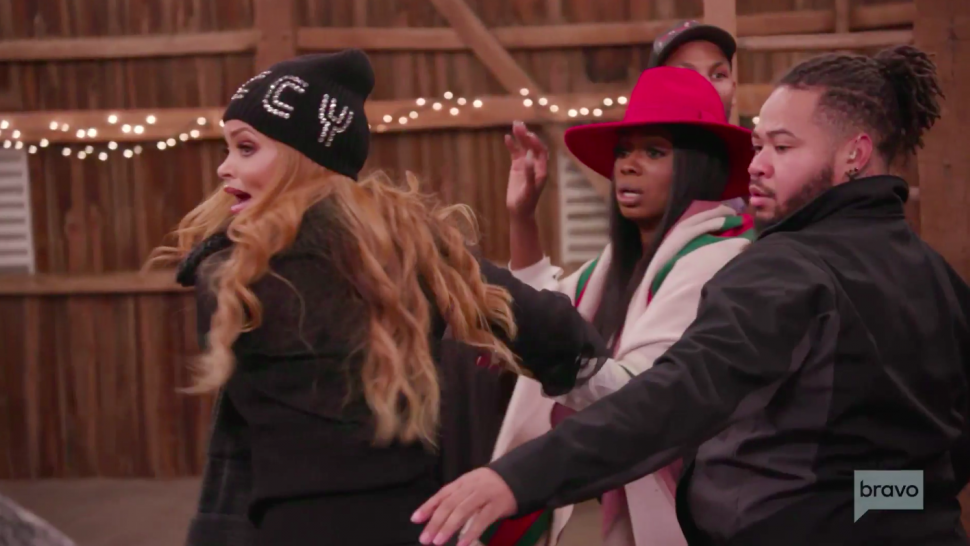 It is all parties and ‘pink’ in the latest episode of ‘The Real Housewives of Potomac’ season 5. Not to mention, the hostilities between the ladies, amidst the celebrations, have not diminished. There are only bits of temporary truces here and there. So what happened in episode 4? And what can be expected in the next episode? Read on!

‘The Real Housewives of Potomac’ season 5 episode 5 will release on August 30, 2020, at 9 pm ET/ 8 pm CT, on Bravo. The show will release new episodes every Sunday at the same time slot.

The upcoming episode is called ‘Look Who’s Squawking’ and its official synopsis goes as follows: “Monique invites everyone to her lake house for a weekend retreat, but the ladies are not prepared for her additional guest. Karen expresses her dislike for Wendy’s obsession with her sex life, meanwhile Gizelle and Candiace’s friendship takes a surprising turn. Ashley decides to bring baby Dean along for the festivities, but Wendy’s strong opinions on her decision leaves the women stunned.” You can also watch its preview here.

Where to Stream The Real Housewives of Potomac Season 5 Episode 5 Online?

Episode 4 starts off with Gizelle attending a dance class with one of her daughters. She is attempting to build a bond with Grace so that the latter is more supportive of her mum’s patch-up with Jamal. Karen celebrates her husband’s homecoming. Wendy and Robyn meet up with their boys for a picnic and some football. Wendy reveals everything Candiace had told her about the housewives. She gossips thoroughly about Gizelle and Monique.

Monique, on the other hand, is stressed out with her motherly obligations and is irritated that her husband is not involved. Meanwhile, Candiace and Ashley meet up for lunch and attempt to sort out their differences. Karen hosts a housewarming party in the back lawn. Gizelle is not that happy when Candiace approaches for an apology. The duo has a temporary truce. Karen enters in a bright pink dress and announces herself as ‘Keyonce’. Hearing this, Ray retires to his room for the night!