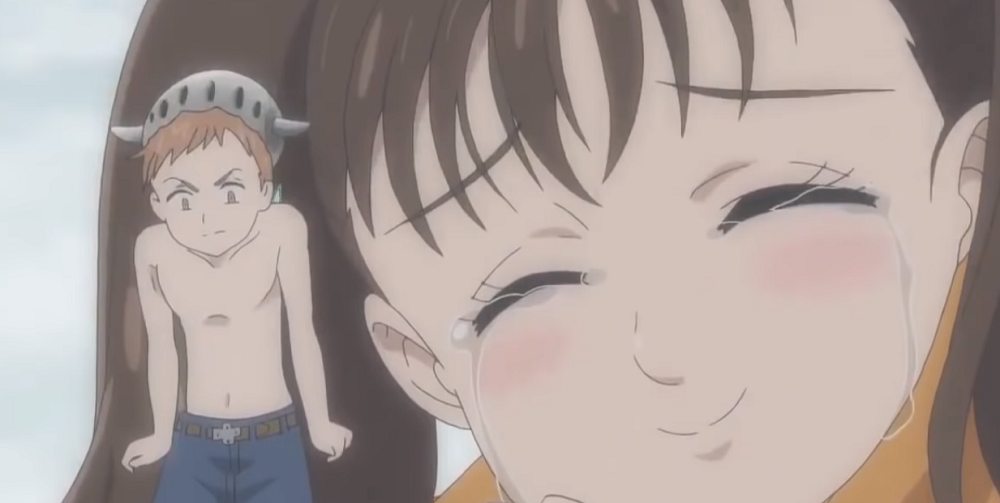 When you look at visually stunning anime shows like ‘The Garden of Words’ or ‘Hyouka‘, it’s not just the compelling storyline or the depth of the characters that truly draws you to these shows; it’s the additional layer that their incredible visuals add to the plot which makes them the intriguing shows that they are. The animation quality in itself can make or break an anime and it plays a crucial role in context with introducing a viewer the overall fantastical world setting of it.

‘The Seven Deadly Sins’ Season 4, though it does have a pretty strong hold on its storyline, with each episode, it seems like it’s slowly faltering because of its subpar production value. And the only reason why I’m still not comparing it with the latter seasons of ‘Fairy Tale‘ is that I still believe in the potential that its present arc holds.

Episode 7 starts off exactly where the previous one left off and brings us back to Diane’s test where she faces Zeldris. Realizing that Gother is the only one who can stop the Holy War, she asks him to leave while she prepares herself for a battle against Zeldris. However, to her surprise, Zeldris is easily able to overpower her and even restricts her from using any magic against him. He then offers her choice: she can either sacrifice her life while protecting Gowther or she can just surrender and become a part of the ten commandments herself. Meanwhile, in the present events, King gets really concerned about her after knowing that regardless of whatever option she ends up choosing, she will not be able to return back to the present world.

King falls to the ground and starts crying but that’s when Diane comes back to life with a huge smile on her face. Both Drole and Gloxinia look at her with astonishment while King starts jumping with joy. She then gives him a kiss and explains that she chose neither of the two choices; instead, she just ran away from the scene to get rid of Zeldris. After being reinstated with the mistakes of their past, Gloxinia and Drole start realizing how even their smallest decisions have had a huge impact on their present. Gloxinia even apologizes to his sister and ends up realizing that her pet, Oslo, is actually the reincarnation of Rou.

This is when the scene shifts back to the lands of Britania, where the other Sins wait for the King’s prophecy to unfold. After completing their tests with Gloxinia and Drole, King and Diane finally return back to the kingdom. They celebrate their reunion with the Sins and everyone also notices how Diane’s memory has returned. She then tells them how Gowther had magically helped her get her memory back after she saved him from Zeldris. The King then shows up and tells them how he possesses Gother’s (the doll) real heart. With this, Gowther ends up remembering something and runs away from the castle while the others decide to chase him to truly understand what’s going on.

Episode 7 takes a step back from the intense drama and action of the previous episodes and adds a bit of an emotional appeal by heavily focusing on the relationships of its characters. While King and Diane’s romance becomes a bit too obvious in this episode, we also get to see a better side of Gloxinia, who was previously portrayed as a cold-hearted demon. When it comes to Gowther, almost everything about his doll version is being presented as riddle right now, but in the next few episodes, we can certainly expect a major part of the overarching plot being driven by his character.

From a character development standpoint, Season 4 has been doing great so far, and while it has been primarily focusing on Diane and King, it has also subtly shed some light upon many other characters. Even the pacing of the storyline seems pertinent and the plot seems interesting enough to make most viewers stay. But the completely implausible fanservice in this episode was a big turn off and the fact that most of it revolved around Diane made it even worse.

Overall, for me, though many fans of the series might disagree, even the emotional appeal of this episode seemed mawkish and felt forced at times; especially the scenes where it emphasizes the relationship between King and Diane. Apart from that, I’m still rooting for the direction it is heading in, but I’m still quite uncertain about the future of this season.

Did You Know ‘The Turning’ Was Shot in Ireland?