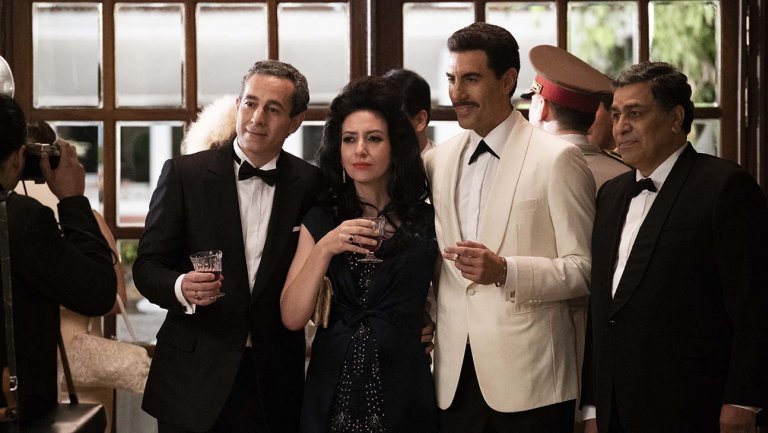 ‘The Spy’ is a true-story-based drama that is written and directed by Emmy-award-winning director Gideon Raff (creator of the Israeli thriller series, ‘Prisoners of War’, which inspired Showtime’s ‘Homeland‘) and Max Perry. It follows the real events in the life of the legendary Mossad spy Eli Cohen. Co-produced by Canal+ and Netflix, this six-part miniseries airs on OCS in France and on Netflix for the international audience. It is produced by Alain Goldman.

The Spy Cast: Who is in it?

The cast of ‘The Spy’ is led by Sacha Baron Cohen as the protagonist Eli Cohen. Best known for his expertise in satire, Sacha Cohen has starred in films like ‘The Dictator‘ and ‘Borat’. His non-comedic roles include Thénardier in ‘Les Misérables’ and the station inspector in ‘Hugo’. He made his foray into the variety sketch category with ‘Who Is America?‘, for which he received two Emmy nominations.

The Spy Plot: What is it about?

Eli Cohen, an Egyptian-born-Jew raised by Syrian parents, spent most of his years by participating in undercover Zionist projects in Egypt. After that, he moved to Israel, where he made an application to be allowed admission into Mossad, Israel’s intelligence agency. However, in spite of applying twice, he was rejected both times. Meanwhile, he got married to Nadia Majald. Finally, he was recruited by Mossad in 1960 and post his training, was sent on a covert mission to Syria.

He infiltrated Syria and successfully managed an espionage project during the years 1961 to 1965 — under the alias Kamel Amin Thaabet. He earned the trust of the top political leaders and military officials by inviting them to wild parties. He even gave them entry into his apartment to carry out their adulterous affairs. Eli soon progressed to be known as a dazzling bachelor and a sex symbol. Gradually, he climbed the ranks to become the Chief Adviser to the Minister of Defense.

However, this conspiracy was soon uncovered by Syrian counter-intelligence authorities. Cohen was apprehended and then sentenced to die. He was executed in 1965 by public hanging at Damascus Square. But the vital information provided by him during his stay in Syria was instrumental for Israel’s victory in the Six-Day War. Considered as a national hero, Cohen’s sacrifices played a huge role in shaping the current Middle East.

‘The Spy’, as evident from its name, is a spy-thriller drama which chronicles the life of Eli Cohen. He is described as a man who “wants nothing more than to be of service to his country”. However, his dedication is so deep and he executes his double role so well that at times, it becomes difficult even for him to differentiate between his two identities. He is joined by Dan Peleg, Eli’s Mossad handler. Dan attempts to hide his failures and pacify his guilt under the disguise of Eli’s sacrifices. He is a charming and brilliant man — often hassled and confused. He may be wise, wary, and stubborn, but often fails to distinguish between his personal and professional lives. Dan is often plagued by a mistake he had committed in the past.

On the other hand, Eli’s wife Nadia is left to manage the entire family by herself. Slowly, she realizes that something seems amiss with her husband’s so-called government job. Amin Al-Hafz is a military officer who believes that he has found his ideal ally in the undercover Eli.

The Spy Season 1 Release Date: When will it premiere?

‘The Spy’ season 1 premieres on Netflix on September 6, 2019. All of the six episodes of the mini-series lands on the platform on the same day. Each episode spans a run-time of 60 minutes.

Netflix has not released an official trailer for season 1 of the show yet. We shall add it as soon as the streaming platform makes it available online.