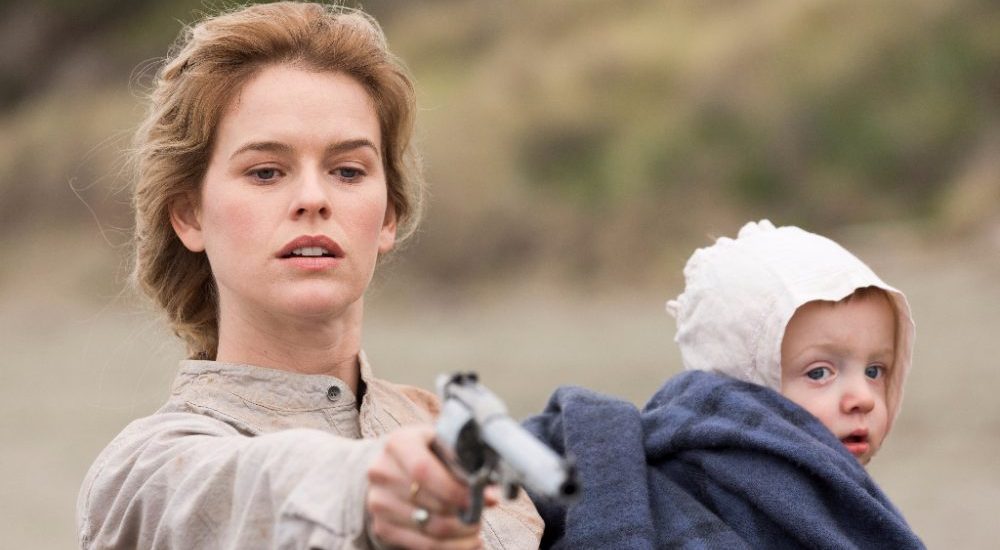 Western movies have historically been heavily male-oriented. One can even say that they have been rather uninclusive when it comes to female representation. Productions like ‘Godless‘ have certainly done well to subvert such norms. ‘The Stolen’ (2017) is a Western movie with a female protagonist that also attempts to do exactly that.

However, instead of portraying its protagonist as an automatically fierce character, the movie attempts to portray her transition to a strong, independent woman, shedding social conditioning and battling a man’s world on the way. The film is directed by the English filmmaker, Niall Johnson who is best known for the 2005 movie, ‘Keeping Mum.’ Alice Eve stars as the protagonist of the film.

Charlotte Lockton is an English woman who, after marriage, shifts to New Zealand. Unfortunately, some of the new workers hired by her husband rob some money, kill her husband, and kidnap her son. A few months after the tragedy, Charlotte gets a ransom letter. She manages to find out that the letter arrived from a distant town named Goldtown.

Charlotte pays a man who is taking a few prostitutes to Goldtown to take her as well. A Maori man named Matai is also traveling with the group. After a perilous journey, Charlotte finally reaches Goldtown. Charlotte request Matai to help her leave Goldtown after her work is done. Matai says he can return in three days. In Goldtown, she has to live in a new brothel where the women she traveled with have begun work. A man named McCullen is the one who starts the brothel. McCullen turns out to be a seemingly good man who does not force Charlotte to become a prostitute right away but lets her stay in the brothel.

Eventually, Charlotte finds out a lead regarding her son’s location. When she goes there, she gets attacked and taken back to the brothel by one of the brothel’s henchmen. Then she discovers that it was McCullen who had killed her husband and kidnapped her son. He had needed the money for his businesses. He continues to need money as a persistent investment, and that is the reason he asks Charlotte for the ransom. That is the reason he does not intend to give Charlotte her baby back. He needs money from Charlotte continuously.

Charlotte manages to seduce McMullen, make him fall unconscious, and run away with her son. However, McCullen’s henchman follows her with a gun. Matai kills the henchman and saves Charlotte. Later, Matai gets shot by McCullen. McCullen takes Charlotte’s son, forcing her to return. However, Charlotte shoots him, takes her son back, and rides off.

The ending of ‘The Stolen’ sees Charlotte shooting McCullen while he is holding her son to threaten her. Then, she rides away on her horse. At the beginning of the film, Charlotte is seen half-heartedly practicing shooting, with her husband. Later, she is also depicted to be training how to shoot a bullet on target, on her way to Goldtown.

The final scene signifies how Charlotte finally manages to muster enough courage to take a bold decision all by herself. Throughout the film, she is depicted to have had to rely on men for support. However, after Matai’s death, she has no option but to fend for herself. When she finally takes that shot, it does more than defeat McCullen. That shot gives Charlotte courage and much-needed self-confidence. She manages to hit the target, yes, but she also manages to do it all by herself: take the bold decision of risking her son’s life momentarily by trusting her ability for a greater pay-off.

The final scene does not exactly reveal what Charlotte does after rescuing her son. That is meant to be open to interpretation. However, the final scene makes it quite clear that Charlotte would be returning home a changed woman. It is quite a positive ending. The conclusion highlights how Charlotte would now have the courage to live a braver, more independent life. She would not need to rely on support from others. Hence, it is reasonable to assume that she would be leading a more determined life. She would cease being defined by the tragedy that befell her. One can presume that she would be able to focus her energy on building a happy life for her and her son, scouting new ways to earn a living (despite already being wealthy) in the untapped Old West-like New Zealand which is brimming with economic opportunities.

Charlotte is depicted to have become wary of domestic help. She fires her maid, a woman who had been kind on her. However, after her journey, one can presume that she would re-hire the maid. In fact, she might also be bold enough to hire other workers and continue her husband’s ambition of making a living in the country.