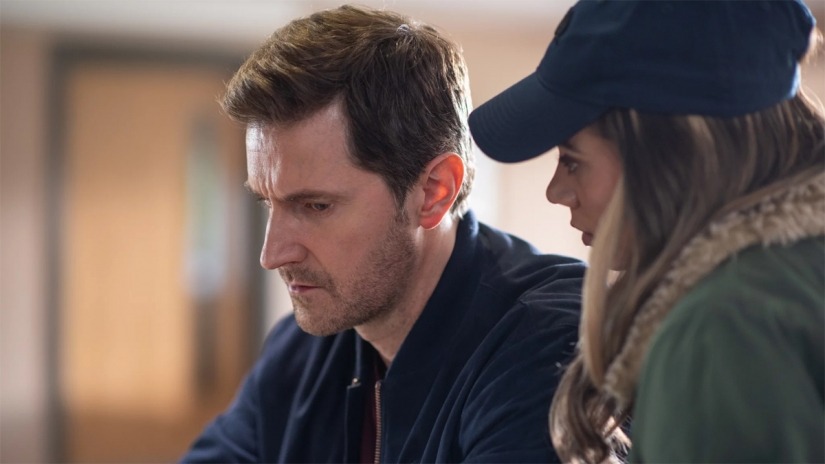 ‘The Stranger’ is addictive enough for you to spend a lazy winter afternoon bingeing away the series. With each crooked turn it throws your way, it lets your curiosity get the better of you. The series leaves you hungry for more. But at the same time, it is not entirely satisfying to devour the chunks of truths it drops on us. In fact, at several points during the series, its twists begin to feel overly stretched, and even unnecessary. This particularly holds true in the seventh episode of ‘The Strangers’ as we slowly approach the finale. But with the big reveal in the end, it does manage to win you over. SPOILER ALERT!

The episode begins with a game of cat-and-mouse as Adam spots the Stranger at the hospital. But she manages to escape. Meanwhile, Katz spots Thomas hiding in back of his car.  Thomas opens about why he came to meet Olivia and opens about how he feels that Olivia’s mother may be secretly poisoning her to make her ill.

Dante finally wakes up from his coma and talks to Jo and Wes about what actually happened during the bonfire night. He went on a walk with Daisy and suggested taking a dip in the lake. As he stripped naked, she ran away with his clothes. He, then, ran into Max Bonner, who apparently chased him. But Dante trips and knocks himself unconscious.

When Jo and Wes talk to Max, he reveals how Dante made a false accusation against him. But that he only chased Dante, and he was out in the forest to get some wood. Jo is having a really hard time investigating Heidi’s case, and her memorials to grieve her. Wes decides to take over the investigation for the day and look at the evidence again.

Meanwhile, Adam finds an unlikely ally in his father as the two realize that they were both approached by the same woman. They realize that it may be in some way connected to Killane, and decide to go through his all his stuff which is currently in Mr. Price’s possession.

Katz is really disturbed after learning about his wife and Olivia. Jo shows up at his place, to make amends after her reaction to him blowing their operation. As the two share a warm moment, Wes calls up to tell her that he has found something on the footage. It shows Katz walking towards the cafe.

But as the call is on speaker-phone, Katz realizes he has been caught. He tries to kill Jo as she tries to run away from him, but finally catches her. The episode ends with Adam finding a photo of the Stranger with Killane, just as she meets Killane at the hospital, who calls her Chrissy.

The seventh episode of ‘The Stranger’ answers most of the questions it introduces right at the beginning. We finally learn about what happened during the bonfire night, which initially makes for the most intriguing aspect of the mystery. But the answers did not suit my craving, and I did feel mildly disappointed with what Dante reveals.

But then, the end of the seventh episode wins you over completely with its intense game of cat-and-mouse that leaves on the edge of your seat. Followed by only the mother of all twists the series has to offer. It almost feels like a *drum roll* moment when we learn that the Stranger is Killane’s daughter, Chrissy. Without revealing much, the ending of the seventh episode gives you more than enough to chew on as you try to piece together whatever little you know about Chrissy so far.

On another positive note, the cast of ‘The Stranger’ offers such strong performances, that you can’t help but feel invested in the lives of these characters who you actually no so little about. This is, of course, not entirely a positive thing, as the series doesn’t let you inside the skin of its character. It lacks depth.

But at the same time, it deals with each one of them (and there are too many of them) with a sense of sensitivity and empathy. This we can see particularly well with the way the series treats its antagonists, Katz, Chrissy and Killane. Of course, we might not entirely sympathise with them, but we do understand them. Having said that, though ‘The Stranger’ has its moments, and feels like an addictive page-turner, it actually doesn’t end up leaving one satisfied enough with what it has to offer.