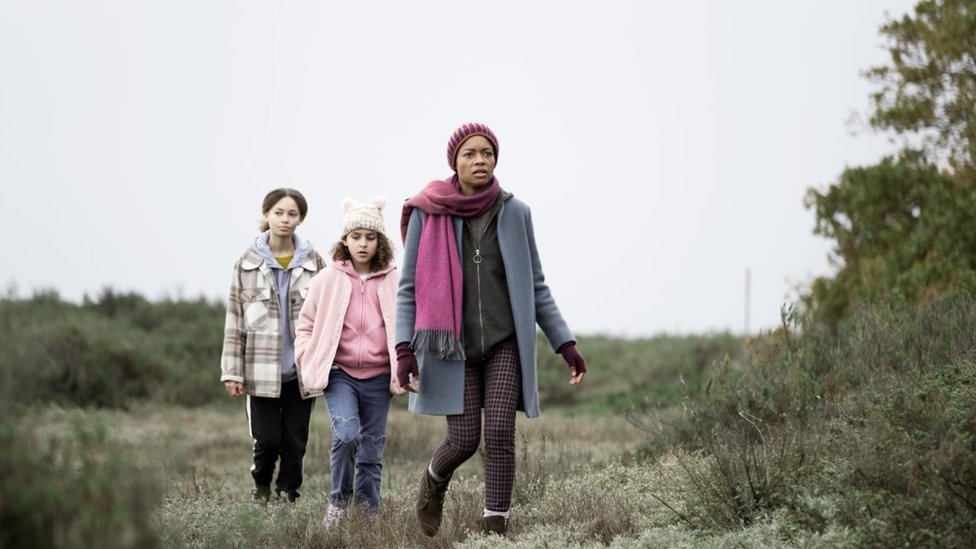 The third and final part of the mind-bending series ‘The Third Day’ – ‘Winter’ – focuses on Helen (Naomie Harris), who claims that she has come to Osea to celebrate one of her two daughters’ birthday. It is later revealed that they are actually Sam’s (Jude Law) family, and she is in Osea to find out what has happened to him.

In the episode titled ‘Tuesday – The Daughter,’ with the link between the show’s two protagonists established, creators Felix Barrett and Dennis Kelly begin exploring the consequences of Sam’s actions and his ultimate fate. The episode also takes time to showcase the infighting that has broken out in once peaceful Osea. SPOILERS AHEAD!

The episode starts with Helen and her girls Elli (Nico Parker) and Talulah (Charlotte Gairdner-Mihell) in their room at The Martins’ (Paddy Considine and Emily Watson) pub/home. A woman somewhere downstairs starts screaming in agony, filling the scene with a deep sense of foreboding. As Helen goes down to the pub to investigate, it is revealed that Jess (Katherine Waterston) is not only pregnant but also in labor.

The scene features a lot of argument and shouting, with each side threatening the other of serious consequences. Jess’ baby is in the transverse lie position, and both of them need immediate medical attention. But one faction of the islanders is not willing to take her to a doctor. With her veterinary background, Helen steps up and successfully moves the baby in Jess’ womb to the correct position.
Aside from helping the islanders, Helen has become more vocal about her real reason for coming to Osea.

She asks the person who seems to be the most open and trustworthy in the room, Mr. Martin if he has seen Sam, and he predictably lies to her. Later, she confronts him after learning that Sam was indeed on the island. He and his wife then tell her that Sam fell in love with someone while he was on Osea, but then he left, telling the islanders that he was going back to his wife. As Helen later finds out, this is also a blatant lie or at least partial truth.

In this episode, we find out how Helen grieved following Nathan’s apparent death. While they look for Jess after she goes missing during her labor, ‘The Cowboy’ (Paul Kaye) is the first to acknowledge among the islanders that he knows who she is. In a powerful scene, she rejects the notion that Nathan was an “angel” and speaks about his “violent” and “difficult” side.” When The Cowboy tries to console her by calling her a “good mother” she angrily retorts that she is just a “mum.”

The wording is important because of the realness attached to the latter word. Clearly, Helen is much more pragmatic than Sam. This has likely manifested in how she views Osea. Despite all fear and dread he felt, Sam approached the island’s secrets with wide-eyed boyish wonder. For Helen, these secrets just don’t exist. She is more concerned about the safety of her family and sees Osea as a shabby little island facing financial ruin.

The Truths Come Out

After the Martins tell her that Sam has cheated on her, Helen decides to leave for good. But the island isn’t done with her. She sees Jess on the beach and pulls her out of the water. With the help of the daughters, she takes the pregnant woman to a nearby empty home, where she helps Jess give birth to her daughter. Jess doesn’t know who Helen is yet and asks her to get the baby’s father there so she can introduce him to his daughter. When Helen wonders if it’s Jason (Mark Lewis Jones), Jess scoffs at the idea and tells her that it’s Sam.

Helen immediately makes the connection; this is the woman with whom Sam had an affair. When she is informed that Sam is still on the island and is currently living in the Big House, she tells her daughters to watch over Jess and goes to confront her husband. Sam sees her first and calls out to her, looking every bit a cult leader with long hair and a bright suit. The episode ends with both of them staring at each other. Ellie seems to have formed a bond with Jess’ daughter Kail (Freya Allan), who is about the same age as her.

Throughout the episode, Kail tries to indoctrinate the other girl in the island’s Celtic faith. After Helen goes to the Big House, Ellie follows Kail to the abandoned water tank, leaving only Talulah with Jess. There is a shrine there. Kail explains the island’s mythology and the necessity of human sacrifice. She then confirms Frederick Nicholas Charrington is, in fact, Jack the Ripper in the show’s universe. Sam, Nathan, and Ellie are all his descendants and have inherited at least some part of his insanity and darkness.

With only Talulah there to keep her company, it doesn’t take long for Jess to figure out who she is. She suddenly turns violent and attacks Talulah with a knife, but the young girl manages to escape through a window. Jess’ full-on villainous turn is one of the biggest surprises of the episode. She has always seemed to have maintained a sense of humanity in all her actions, despite how reprehensible they are. In this instance, however, she is truly evil, as she tries to eliminate a future competition to her daughter’s claim as the successor to Sam.