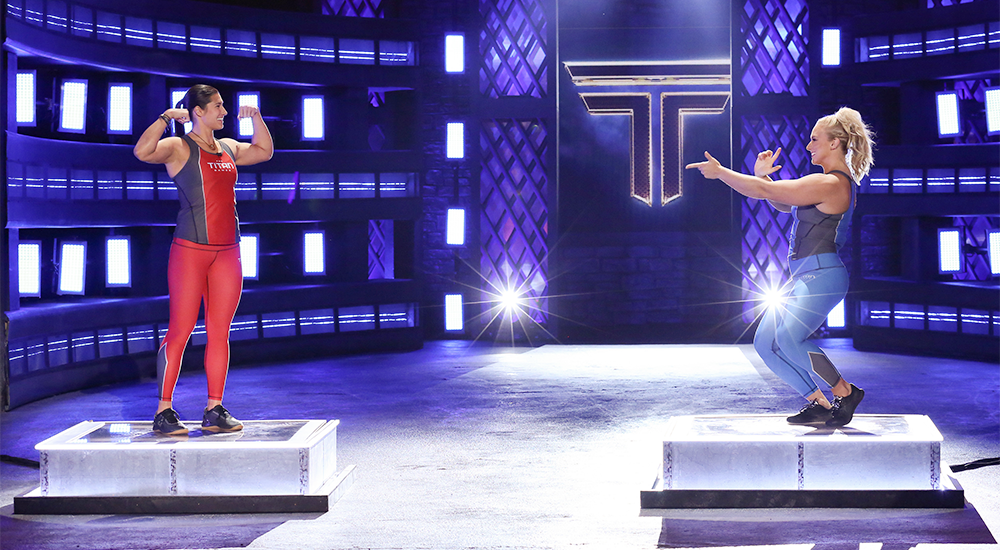 This week, in ‘The Titan Games’, we have the Regional Finals for the East Division, which gets pretty intense. This is expected since episode 11 also happens to be the pre-finale for the second season. The first challenge is Hammer Down, with Haley taking the lead, followed by Hannah, and then, Dasha. The trio reaches the final pole simultaneously but Hannah wins the round! Haley is eliminated after having such a promising start. As for the guys, we have Andrew Hanus, Tyron Woodley, and Josh Porter. Josh takes an early lead and ends up with Tyron at the same time on the pole. Andrew is evicted!

Tyron and Josh partake in Resistance and Josh bags the win, making a triumphant return to Mount Olympus against Will. Hannah and Dasha battle it out in Resistance and Hannah is the winner, taking on Courtney on Mount Olympus. Now, the final race begins! On Mount Olympus, Courtney takes an early lead, reaches the ball and chain first, and without much trouble, becomes the Eastern regional champion. Will and Josh’s race is neck to neck — one of the closest Mount Olympus races ever! Will falls a couple of times but finally, emerges as the winner, once again!

Well, with the Eastern champions being confirmed, they will join the rest of the Titans in the grand finale that drops next week. For some detailed insights into the much-anticipated last episode, you can give our preview a quick read.

The 12th and final episode is called ‘The Titan Games Championship’. Here, we will see six of the most elite Titans making their final appearances in the competition. They are Dani Speegle, Margaux Alvarez, Courtney Roselle, Matt Chan, Noah Palicia, and Will Sutton. After battling it out in the Nuts and Bolts, Chain Linked, Lunar Impact, and Kick Out rounds, the top 4 — two men and two women, will participate in Dwayne Johnson’s Mount Olympus race for the last time. Finally, the winners (one male and one female) will be crowned as the Titan Champions for season 2. Alex Mendez and Cari Champion will call the action alongside The Rock!

Where to Stream The Titan Games Season 2 Episode 12 Online?

‘The Titan Games’ season 2 is a Monday staple on NBC. If you are in the US, you can easily catch up on the latest episodes of the reality show by tuning into the channel on your tv screens each week at 8 pm ET. If you have a cable subscription for NBC, you can also catch the episodes online, following their tv premiere, on the show’s official website.

If you are a cord-cutter, you can resort to the multiple live TV streaming services, namely, Sling TV, YouTube TV, Fubo TV, and AT&T TV Now. Season 1 of ‘The Titan Games’ is also available on Hulu. Additionally, already released episodes can be rented or bought on Amazon Prime Video. All the episodes of the first season are currently streaming on Netflix.