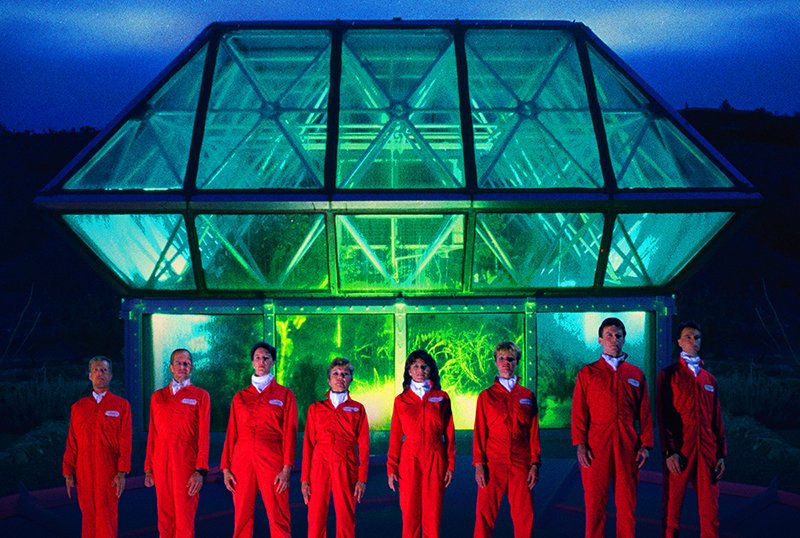 ‘Spaceship Earth’ is a documentary that might feel fictional at first. It involves a revolutionary science experiment, reality TV-like conflicts, and a cult-like situation. However, the documentary is not fictional at all. It tells the surprising true story of Biosphere-2, an actual scientific experiment. The series makes use of archival footage and present-day interviews in order to depict what actually transpired. The movie is directed by Matt Wolf, who is responsible for films like ‘The Portrait of Arthur Russell.’

The official website of Biosphere-2 describes it as a ” facility [that] serves as a laboratory for controlled scientific studies, an arena for scientific discovery and discussion, and a far-reaching provider of public education.” Located in Oracle, Arizona, the facility was constructed as an experiment to test whether humans can live sustainably in a vivarium. Biosphere-2 can be considered to be a mini-model of our planet (Biosphere-1 is the Earth): a closed system that mirrors the ecosystem of Earth and can sustain life for multiple species (ideally) indefinitely.

Take a trip around the world inside of our 3.14 acre facility. Tag a bestie that would explore Biosphere 2 with you 👯 #biosphere2 #rainforest #ocean #savanna #marsh #desert #adventure #science #explore #sightseeing

The idea for Biosphere-2 emerged in Synergia Ranch, an ecovillage and counterculture community in New Mexico. The main proponents of the idea, Ed Bass and John Allen, met there. An organization known as Space Biospheres Ventures was founded, and in 1984, the company announced its intention to build a closed structure wherein multiple ecosystems would be housed, providing a group of people with air, water and food. Bass, the heir of a multi-million dollar Texas oil family, was responsible for most of the funding.

Eight volunteers, it was announced, would be quarantined inside Biosphere-2 for a couple of years. If successful, Space Biospheres Ventures intended to “to produce and market biospheres around the world,” with the possibility of hosting life on the Moon or Mars (New York Times). The experiment received wide media coverage.

“The structure was meant to be representative of the environments on Earth, and the enclosure was divided into zones that included a desert, marsh, thorn scrub, rainforest, Savannah, and even an ocean,” according to Ripley’s. Since Biosphere-2 was meant to be representative of Earth’s ecosystem, it also housed other organisms, with its original plans calling for 3,800 species of animals and plants. There were hummingbirds, pygmy goats, chickens, pigs, and primates known as bush babies. There was also a coral reef.

Today, Ty Roach (UA post doctoral researcher) and Erika Santoro (PhD student) are diving in Biosphere 2’s Ocean Ecosystem to collect microbial samples from the reef. These samples will help to inform the research team about the readiness of the system for corals! #biosphere2 #uarizona #coralreef #restoration #ocean

The volunteers who were going to experiment living in Biosphere-2 for a couple of years entered the facility on September 26, 1991. There were five Americans, two Britishers, and one Belgian. Out of the eight, there was one botanist, a physician, and a marine biologist. One of these volunteers, Mark Nelson told Dartmouth Alumni Magazine, “farming took up 25 percent of our waking time, research and maintenance 20 percent, writing reports 19 percent, cooking 12 percent, biome management 11 percent, animal husbandry 9 percent.”

The experiment required the team to grow their own food, despite their lack of farming experience. “Among our 80 crops were rice, yams, peanuts, sorghum, millet, beets, wheat, carrots, peppers, bananas, figs, tomatoes, kale, eggplant, onions, papayas, beans, sweet and white potatoes, squash and herbs,” said Nelson. Unfortunately, the experiment did not turn out to be as utopian as it sounded on paper. For starters, cockroaches “exploded in crop-threatening numbers.”

After about two weeks, one of the volunteers, Jane Poynter, cut her finger in the rice threshing machine and needed to be sent out of the biosphere for surgery. She returned with several supplies that were given to her by the Biosphere-2 staff. Later, reporters found out that there had been regular deliveries to Biosphere-2 for provisions like seeds and vitamins, twice a month. “It soon became clear that raising food in Biosphere 2 was a major challenge. The weather was cloudy for the first few months of the mission, stunting the growth of crops. The Biospherians had to break into a three-month supply of food that had been secretly stored away before the doors had closed,” according to the New York Times.

Then, the group started to suffer from “irrational antagonism.” The volunteers, stuck inside, divided themselves into two factions, of four members each. One of the groups wanted new management while the other wanted to continue things the way they were. The atmosphere had become extremely tense and negative. There were no physical fights, but a volunteer had been spit at, twice. But each of the volunteer’s commitment to science kept things afloat. Two male-female couples also emerged while the rest stayed single.

However, there were more problems. The oxygen levels began to fall because of an increase in oxygen-consuming bacteria. Oxygen levels dropped from 20.9 percent to 14.2 percent, and living inside Biosphere-2 was now equivalent to living at 14-15,000 feet. Oxygen had to be pumped in from the outside. “We began madly laughing and running,” Nelson recalls.

Unfortunately, the hummingbirds and honeybees died. As a result, the crops were not being pollinated. Pests grew and threatened crops in increasing numbers. “Biosphere 2, it was widely reported, was a catastrophe. In 1999, when Time did its fin de siècle summary of the 20th century, it included Biosphere 2 in its list of the worst 100 ideas,” reports Discover Magazine.

Later, Biosphere-2’s management was transferred to Columbia University, which ran the facility as a research institute till 2003. In 2007, the University of Arizona acquired Biosphere-2. Today, “its mission is to serve as a center for research, outreach, teaching and life-long learning about Earth, its living systems, and its place in the universe; to catalyze interdisciplinary thinking and understanding about Earth and its future; to be an adaptive tool for Earth education and outreach to industry, government, and the public; and to distill issues related to Earth systems planning and management for use by policymakers, students and the public,” according to its official website.

SCIENTISTS AT WORK: A group of international researchers are currently working around the clock to set up monitoring systems and instrumentation before we place our Rainforest under drought conditions! #B2WALD #biosphere2 #science #research #rainforest #alwayslearning

#Repost @regina_creativekismet ・・・ Spent the day at Biosphere2 celebrating Father's Day and there were lizards everywhere rejoicing from the recent rain. This lizard kindly posed for this photo. He even let the boys pet his tail. Obviously very used to the visitors at the Biosphere. . . . . #biosphere2 #lizard #scienceisreal #desertliving #desertdweller #tucsonarizona #tucson #arizona #uofawildcats #universityofarizona #arizonabeauty #desertlife #uaresearch #STEM #sustanability