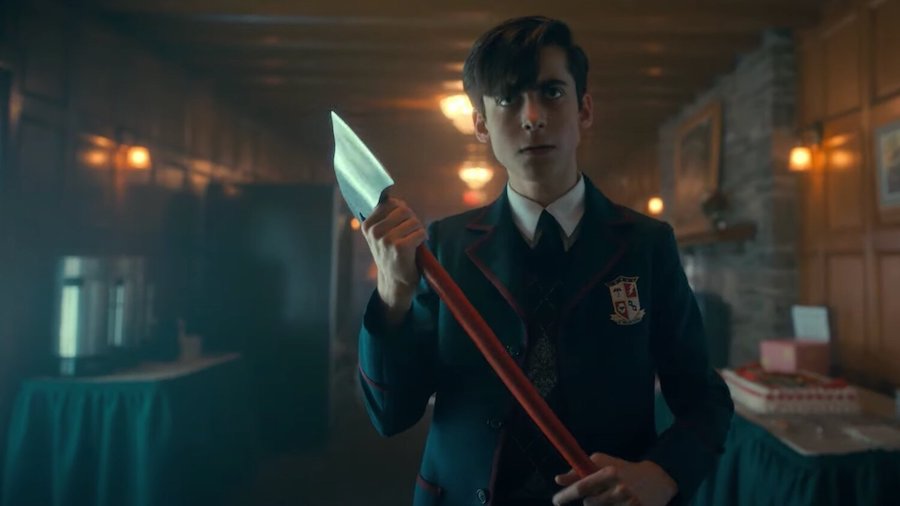 Action and urgency go up another notch as second season of ‘The Umbrella Academy’ moves closer to its finale. Knowing that stopping the apocalypse is most probably out of their hands now, Five decides to settle for going back to their original timeline, hoping that it will reset the course of events, and the 1963 apocalypse will be rendered impossible by itself. But with no means of going back, he is forced to make a choice that does not look good for him, or anyone else for that matter.

The deal between Five and the Handler is put into motion where Five gets rid of the board of directors and the Handler gives him a way out of 1963. However, she doesn’t make it as easy for Five as he had expected. While he tries to get his siblings together, some important developments take place on the sideline.

The most interesting thing happens with Klaus and Ben. They discover that being a ghost now allows Ben to possess others, or at least, he can possess Klaus. The Handler takes charge, much to the chagrin of all the employees of the Commission and appoints Lila her Head of Security. The Swedes take another hit, and Diego receives an appealing offer.

In what is perhaps the bloodiest opening scene of ‘The Umbrella Academy’, we find Five proving yet again why he is a force to reckon with. He might be in the body of a teenager, but he never fails to showcase the experience he has amassed while working for the Commission. Now, he is using the same skill set to strike a fatal blow at them. In his deal with the Handler, he had decided to eliminate all the board members, and that’s what he does, without blinking an eye.

But it is not the killing itself that interests us, it is the aftermath. With all of the competition gone, there is no one to challenge the Handler’s authority. She promised Five that she would be making some changes in the Commission regarding how things are handled there, but she is not to be trusted, and we are proven right when she pokes a loophole into her deal with Five. In exchange for his services, she was to give him a briefcase to ease time travel for him. But she put a time limit of 90 minutes on it, which was not enough by any counts to reunite his siblings, especially when they all have someone beloved whom they’d want to bid a proper goodbye.

On top of all this, there are several other factors that threaten to halt them in their tracks. Five, Luther and Diego divide the task amongst themselves to bring back their three other siblings. Diego goes for Klaus, who is in the middle of a new arrangement with Ben. It turns out that their connection has superseded another level, and now, Ben can actually possess Klaus. This would allow him the opportunity to feel things that he couldn’t for all these years, though in the body of his brother. Luther goes for Allison, who stays back for a bit to bid adieu to her husband. But their goodbye is cut short when the Swedes attack them.

Five goes for Vanya, who has been threatened by Carl. She wants to bring Sissy and Harlan with her, but Five is against him. No one is insignificant, he says, when it comes to time. This also makes us wonder how much difference the presence of the Umbrella Academy in the 1960s would have caused. Does it mean the future would be different too? What will 2019 look like when they return?

In the end, it is only Five, Luther, and Klaus-possessed-by-Ben, who turn up in the alley. Vanya’s path is blocked by the cops and after a display of her powers, she is arrested. Diego, on the other hand, is duped by Lila, once again. It looks like her feelings for him had always been real, and she knows that if Diego remains on the outside, the Handler will find one way or another to kill him. So, she recruits him instead, keeping him near her and away from danger. But, of all the people, Diego is not the kind to bow to authority and stay in the place where he doesn’t want to be. What turn will his presence at the Commission headquarters take?