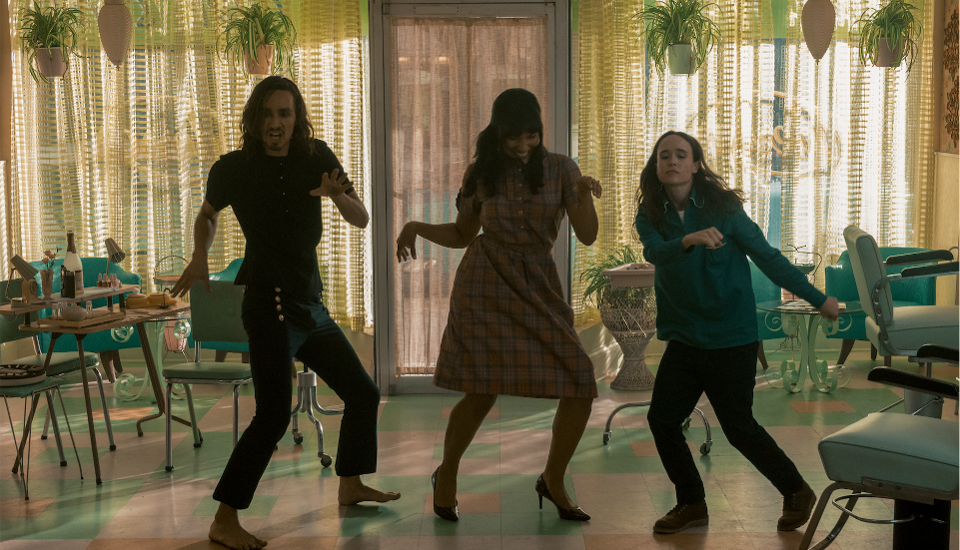 Netflix’s ‘The Umbrella Academy‘ is an exciting show that holds your attention through its many twists and turns. While the story is absolutely captivating, it is the music of the series that makes it all the better. In Season 2, the Hargreeves siblings land in the 60s, which allows the show the opportunity to use more music of that era. It makes for an impeccable soundtrack collection. Here are all the songs that feature in ‘The Umbrella Academy’ Season 2:

Beyond the Sea by Bobby Darin (Klaus lands in 1960)
Right Back Where We Started by Maxine Nightingale (The others fall into different years in the 60s)
My Way by Frank Sinatra (Five witnesses the second apocalypse)
Trying by Fran Powers (Vanya has dinner with Sissy, Carl and Harlan)
I Wonder What the Future Holds For Me by Glenn Snow (Klaus enters the bar)
Rocket Fuel (feat. De La Soul) by DJ Shadow (Luther’s fight scene)
Crazy by Daniela Andrade (Diego is held in solitary confinement)
Comin’ Home Baby by Mel Torme (Lila and Diego escape asylum)
You Only Want Me When You’re Lonely by Jim Boyd (song plays in the jazz club)

I Gotta Get the World Off My Back by Bill Martin and Phil Coulter (Klaus in the diner)
Sunny by Boney M. (Klaus becomes a cult leader)
I Don’t Care What They Say About You (Vanya is attacked by the Swedes)
I’ll Never Do You Wrong by Joe Tex (Luther finds Allison’s house)
Golden Brown by The Stranglers (Lila meets the Handler)

Love is Blue by Marty Robbins (The Handler raises Lila)
Renegade by Styx (Klaus loses his Sobriety)
Have You Ever Been Hurt by Helen Wilson (Luther meets Allison)
Unwind Yourself by Marva Whitney (Luther and Eliot get high)
I Was Made For Lovin’ You by Kiss (Five, Diego and Lila fight the Swedes)

Won’t Be Long by Aretha Franklin (Alison works at the parlour)
An Old-Fashioned Christmas by Jack Huddle (Raymond meets Alison)
Hold On, I’m Comin’ by Sam and Dave (Alison and Raymond go shopping)
I Live Alone by Bob Cox (the Handler and Lila play bingo)
The Order of Death by Public Image Ltd. (The Umbrella Academy arrives for the light supper)
In Hell I’ll Be In Good Company by The Death South (Carl finds out about Vanya and Sissy)

Pepper by Butthole Surfers  (Vanya is tortured by FBI)