Who is the Weeping Monk in Cursed? 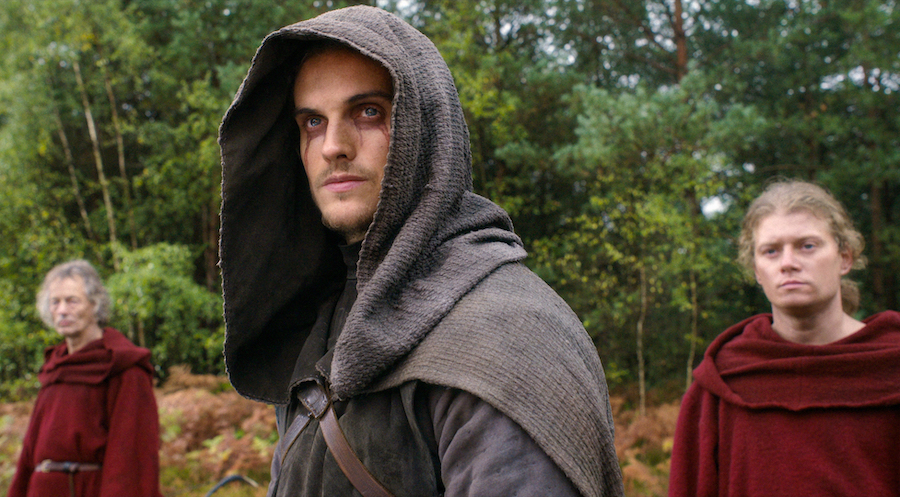 Netflix’s ‘Cursed’ tells the story of Nimue, a Fey girl who has to battle the extinction of her species at the hands of the Church. Her most intimidating enemy is the Weeping Monk, a mysterious man in a grey shroud who has an uncanny ability to seek out the Feys. He seems thirsty for their blood and spares no one, except children. Who is this mysterious man and where does he fit into the story of King Arthur? Let’s find out. If you haven’t seen the ENTIRE first season yet, head over to Netflix. SPOILERS AHEAD

Who is the Weeping Monk?

‘Cursed’ is inspired by the legend of King Arthur and the Knights of the Roundtable, but it doesn’t adhere to the story that the audience is pretty familiar with. Using a similar framework, it bends the rules of the original tale to not only reinvent the old characters but also add some new ones. The Weeping Monk is the result of this attempt.

Introduced to us as the most formidable enemy of the Feys, the Weeping Monk is the sword of the Red Paladin that is covered with the blood of the Fey population. His backstory reveals him to be an orphan who was adopted by Father Carden. He was brought up with a strict discipline that paved the path for his service to the Church and made him despise the Feys as their worst enemy. His unparalleled swordsmanship makes him a feared figure, not just for the enemies but also for the rest of the Paladins. He is also an excellent tracker and can smell out the Feys, which is why he is the biggest threat to them.

He gets the title of the Weeping Monk due to strange markings on his face that make it look like he is weeping. It is later revealed that the birthmarks and the ability to track down Feys come from his bloodline. He, too, is a Fey and belongs to the seemingly extinct group of the Ash Folk. He was turned against his own kind by Father Carden who told him that hunting down Feys was his chance at redemption for being born as one.

Looking into the legend of King Arthur, we don’t find any character by the title of the Weeping Monk, which leads us to believe that he is an original character created to serve the purpose of the new storyline. However, at the end of the first season, it is revealed that the Monk is, in fact, one of the most important figures from the legend. He is Lancelot!

According to the original legend, Lancelot was never called the Weeping Monk, nor did he have any such birthmarks on his face. He was Arthur’s greatest ally and was raised by the Lady of the Lake after the death of his father, King Ban of Benwick. He had an affair with Guinevere, the wife of King Arthur, which led to a civil war in the court and brought the downfall of Arthur’s kingdom. The show strays from his traditional storyline but does retain some interesting and basic facts about him.

Originally, Lancelot learned magic from Lady of the Lake aka Nimue. In the show, he possesses the power of magic, but he doesn’t get it from Nimue. In fact, he is her biggest enemy in the show. He is also presented as the most skilled swordsman, a title he earns in the original version as well. Interestingly, the Roundtable’s Lancelot was also tied to Christian themes in the legends. The show uses this little detail and by extrapolating it sends him into the camp of the Red Paladins, who serve the Church. The show also keeps the arc of him being adopted as a child after the death of his parents. In the original, Nimue serves as his mother, but in the show, he grows up under the eyes of Father Carden.

Despite his initial villainy, the show turns him into a very likable character, and, by the end of the first season, he proves himself better than most. Still, there is a long way to go for his character, and the show opens a lot of possibilities for the new version.