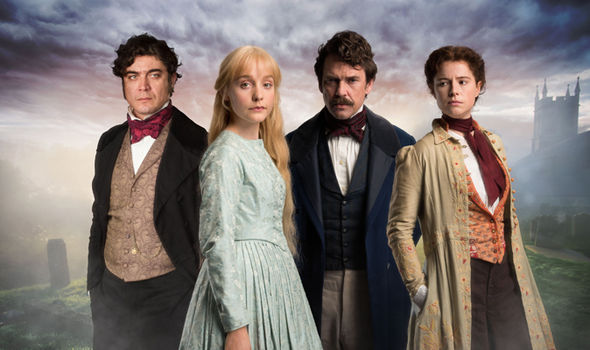 TV adaptations are a lucrative field of production which offers an equal measure of risk and rewards – and a very many set of networks are well-known for pitching these shows at the most unexpected of hours. Unlike the regular western channels, BBC’s body of works so far has had enough qualitative power to warrant at least a serviceable possibility to succeed. As is the case with adaptation, many shows tend to be hit or miss, and a failure to harness one particular side of things is not uncommon either. When ‘The Woman in White’ was announced, for example, it did raise some eyebrows and had cynical feedbacks as much as it had hyped and stoked viewers. While BBC did have a number of shows based on novels written roughly around the Victorian and Edwardian era (to cite examples: Dickens’ Bleak House, Thackeray’s Vanity Fair, George Eliot’s Middlemarch, Elizabeth Gaskell’s North and South), the success has piggybacked on the already impactful nature, individual merits, and literary interest of the original fictions.

The Woman in White is in a way BBC’s first foray into the sensation novels (the natural successor to what is known as Newgate fiction) – which, rather than of a high literary nature, is often considered to be a more populist school of fiction. However, BBC’s adaptation managed to hit exactly the right notes. There was a high likeliness to bastardize it into the TV equivalent of grub street literature – given the tendency of the sensationalist novels to orient more towards populist gimmicks and genres, including the semblance of a crime biography. BBC’s The Woman in White takes one aspect of the Wilkie Collins original which made it famous – its status as one of the earliest prototype of the detective novel, and expands on it, while also contextualizing it as a feminist dictum of striking back against the partiality of the law.

The Woman in White Season 2 Cast: Who’s in it?

Throughout history, BBC adaptations have been known for their incredible star power – as the larger body of BBC subsidiaries has enough networks and connections to use the proverbial scalpel and chisel to select and curate the perfect cast from a large pool of actors and actresses – both promising newcomers and veterans on the theatrical stage. The Woman in White is no exception to this rule, and the highlight of its star-studded cast falls on Ben Hardy in the everyman role of Walter Hartright (even if you are not up to speed with British TV, you will very likely know him as Roger Taylor in the recent docu-film on Queen, ‘Bohemian Rhapsody’). Other prominent figures in the cast include Jessie Buckley as Marian, Dougray Scott as Sir Percival Glyde, and Olivia Vinall as Laura and the eponymous Woman in White, Anne Catherick. We should by this point note that a second season to this is extremely unlikely, but if the network somehow does manage to greenlight an original-script spinoff or continuation, it is likely that Jessie and Olivia will be back in the limelight in their respective roles.

The Woman in White Season 2 Plot: What is it about?

As an adaptation, The Woman in White seems to initially be very faithful to the source novel initially, but as it culminates to the climactic finale, the deviation from it becomes pronounced, as BBC’s adaptation harps on the glorification of a liberated woman – much in line with the show’s feminist sentiment – as Marian takes up the onus of ‘opening… (her) eyes to the true wonderments of this world’, as she lets the now-settled Laura know in her parting letter. This is radically different in effect from the vanilla ending of the novel, where Marian goes to live in Limmeridge with her new husband in a predictably tame domestic life. After this distinction was made clear, of course, the Twitteratti and buzz surrounding the show have been clamoring for a spinoff based on Marian – but while the show did deviate from the original, a completely new spinoff script seems unlikely.

The Woman in White Season 2 Release Date: When will it premiere?

This is not BBC’s first venture into Wilkie Collin’s esteemed classic prototype of detective fiction, previously having covered it in a standalone miniseries in 1982, and again in a 1997 TV movie adaptation in the ‘Masterpiece Theatre’ series. Out of the three, the recent miniseries has been the boldest with its unflinching political tint and stance, and daring deviations in the plot. However, it seems very unlikely that they will continue the deviation and go on a continuation with the liberated Marian. So far, the show has neither been renewed nor canceled, with a specific air date for season 2 still unknown.

The Woman in White Season 2 Trailer

No official confirmation or updates on the renewal status of the show spells that season 2 has not materialized in any major sense yet. We don’t know if production or filming has begun yet for the same and thus there is no promotional content (such as trailers or teasers) exclusively for another season. What remains to do for the fans of the show is hope that the show comes on reruns and repeat telecasts on BBC and its subsidiaries while they wait for confirmation of renewal. With the possibilities for another season likely to reach a high enough point, now is a better time than any if you have not watched the show and want to catch up with it. If you have not yet been convinced and want to know more about the show before you dig in, a great way to start is by watching the official release trailer for the debut season above.