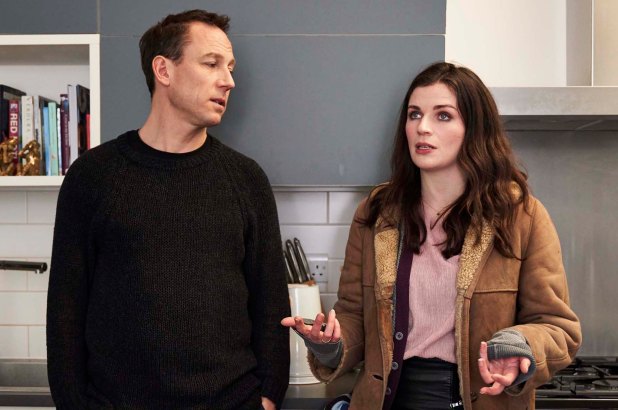 ‘This Way Up’ is a comedy-drama that follows the journey of Aine, who attempts to resume her life after spending some time in a rehab, post a nervous breakdown. It is a story mainly about the search for happiness and dealing with loneliness — a path which might not be easy for everyone. Created and written by Aisling Bea, the six-episode show airs on Channel 4 in the UK. Its distribution rights in the US are owned by Hulu. ‘This Way Up’ is directed by Alex Winckler and credits Sharon Horgan and Clelia Mountford as the executive producers.

This Way Up Cast: Who is in it?

Renowned Irish actress and comedian Aisling Bea is credited both as the creator and protagonist for ‘This Way Up’. Joining her is a stellar cast of A-list actors, including Sharon Horgan (‘Catastrophe‘), Tobias Menzies (‘The Crown‘ and ‘The Terror‘), Indira Varma (‘Patrick Melrose‘ and ‘Game of Thrones‘) and Aasif Mandvi (‘The Daily Show’).

Bea enacts the lead character of Aine, a smart foreign-language teacher, trying to bring her life back on track after a trip to a certain “spa”. Horgan plays Shona, her caring sister, who is figuring out how to rectify her wrong life choices. Mandvi stars as Shona’s boyfriend Vish, Menzies plays Richard (the father to one of Aine’s students), and Varma is Charlotte, Shona’s closest colleague and confidant.

This Way Up Plot: What is it about?

We all search for happiness, don’t we? But for some, this journey is harder than that of others. ‘This Way Up’ is a sharp, warm, and poignant comedy which attempts to chronicle a quest, that is all about moving forward and onward. Branded as a companion piece to Hulu’s ‘Fleabag’, the show follows Aine, a sensitive Irish-born woman, just out of a rehab facility. She is supported by her caring, concerned older sister, Shona. Aine is depicted as a lonely and highly insecure person, attempting to hide her anxieties under the veil of self-deprecating humor. She meets Richard, a Brit and a widower, who has a French-born son, Etienne. Aine is given the responsibility of teaching English to this shy, withdrawn 12-year-old kid.

Aine, four months after her “spa” stint, seems to have completely recovered. She has resumed teaching English to her students, developing a close bond with them. On the other hand, Shona’s boyfriend Vish wants her to move in with him. But she is confused and is involved in a new female empowerment business model in partnership with her colleague, Charlotte.

‘This Way Up’ is a pleasant watch, especially because of its brilliant performances and the incredible on-screen chemistry. Additionally, since its episodes are only around 20 minutes in length each, you can easily binge on it at a stretch. Additionally, if you are a fan of UK comedy and enjoy British in-jokes, this is the perfect watch on a lazy weekend.

If season 2 is commissioned, you can expect to see more of Aine’s life as she tries to deal with her insecurities.

This Way Up Season 2 Release Date: When will it premiere?

‘This Way Up’ seamlessly blends the elements of comedy with those of a heartwarming drama. Packed with a considerable dose of poignant moments, it is a wonderful addition to Hulu’s comedy repository, which has shows such as ‘Pen15‘, ‘Difficult People‘, ‘Casual’, and ‘Shrill’.  With its tense humor, compassionate storyline, and a stellar cast, ‘This Way Up’ delves into mental health in its own witty manner. Because of its fresh approach the show earned a fair amount of appreciation both from the critics and audiences.

The show holds immense potential to be explored further. But no renewal announcement has been made yet. If, in fact, the show gets renewed, you can expect ‘This Way Up’ season 2 to release sometime in August, 2020.

This Way Up Trailer: