Is Three Billboards Outside Ebbing, Missouri Based on a True Story? 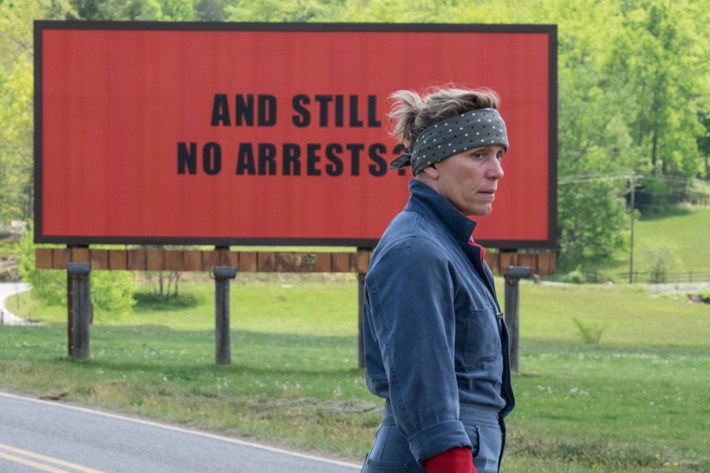 Martin McDonagh’s third feature film ‘Three Billboards Outside Ebbing, Missouri’ is a revenge tale seasoned with dark comedy, featuring Academy Award winner Frances McDormand as Mildred Hayes, a divorced mother of two (a son and a daughter), living on the fringes of Ebbing, a remote town in Missouri. The family is soon struck with grief, as the daughter is found on a mountain road, not far from home, raped and murdered. Infuriated by the lack of police participation in the investigation, Hayes goes on to rent three billboards, publicly questioning the competence of the local chief. Hayes attracts the unwanted attention of media, a racist cop and the people in her town in the process of seeking justice for her daughter.

“Raped While Dying”
“And Still No Arrests?”
“How Come, Chief Willoughby?”

These three billboards shocked the viewers who raised further questions that digs deep into the subject matter of the Oscar nominated film, ‘Three Billboards Outside Ebbing, Missouri.’

The Academy Award winner McDonagh’s film showcases the power of forgiveness and dysphoria, keeping a tab on how violence engenders violence, while also maintaining why civility isn’t enough at times when the basic definition of moral responsibility is in question. Best known for critically acclaimed films like ‘Seven Psychopaths,’ ‘Six Shooters,’ and ‘In Brudges,’ the success of ‘Three Billboards Outside Ebbing, Missouri,’ adds another feather to his cap.

But as you delve deeper into the film, you can’t help but wonder: “Did this actually happen to someone?” Well, look no further as we guide you through the real-life horror that inspired the multi-award winning film.

Three Billboards Outside Ebbing, Missouri: True Story or Not?

James Fulton, a resident of Vidor, Texas, has been putting up billboards on a latent freeway that cuts from Los Angeles to Florida, for nearly 30 years. His late daughter Kathy Page was found dead, over 100 yards from her residence, in a car wreck. However, reports suggest that Kathy was placed in the vehicle after she died, hinting a homicide.

A heartbroken parent putting up billboards to shame the police authorities for displaying remarkable ineptitude – anyone who has watched the film would instantly notice the striking resemblance between reality and fiction.

The original three signs read: “Vidor Police Botched Up The Case,” “Waiting For Confession,” and “This Could Happen To You.” Although they aren’t exactly identical to the ones displayed in the film, the signs scream just one message: In 1991, Kathy Page (Fulton’s late daughter) was raped and strangled to death, and the local police didn’t do enough to solve the case.

The 86-year-old father is in no hurry stop anytime soon and plans on continuing it until his very last breath. Fulton has reportedly spent more than $200,000 on the court case and billboards. He has refrained from watching the film, fearing it might bring back disturbing memories of the past.

Fulton’s daughter Sherry Valentine has, however, watched the film and spoke about it in a detailed interview with Daily Mail, stating, “I saw that movie and I was never more proud of dad than to see those billboards up. In the movie, the lady was so determined and that’s like my dad also. They are the same like that. There was nothing done out of spite. But you have to do something because time, it’ll creep up on you and it steals evidence – the people involved die and such.”

She further added, “So, you just have to do what you can to solve it. I’m ready to put up some more if that’s what it takes.”

As of today, Kathy’s murder remains unsolved, despite a civil trial in the year 2000, found Steve Page (Kathy’s estranged husband) guilty of her death. He has not been charged and remains the prime suspect.

McDonagh has already established himself as one of the most thought-provoking playwrights of our time.

In an interview with LA Times, the filmmaker openly credited Kathy Page’s murder case as the inspiration behind the film. Claiming to have seen the billboards while he was travelling through Texas on a bus, nearly 20 years ago, he explained, “It was this raging, painful message calling out the cops about a crime. The title [of the film] came from the concept and the concept came from that image, which stayed in my mind for years. What kind of pain would lead someone to do that? It takes a lot of guts – and anger.”

Talking about how Mildred was born, he further added, “I never was able to find out what or where it was but I decided it must have been a mother.”

As far as the performances are concerned, Frances McDormand masterfully showcases the agony of a grieving mother, along with a dash of some offbeat dry humour, which she often sprinkles on Peter Dinklage’s character James and Sam Rockwell’s racist cop Dixon. Woody Harrelson does not miss a beat as the officer Willoughby, who in the eyes of Frances’ Mildred, is as guilty as the killer.

In conclusion, it won’t be wrong to say that ‘Three Billboards Outside Ebbing, Missouri’ is a testament to McDonagh’s brilliance as it features his trademark mangled humour, characters with flawed emotional competency and provocative writing style. His careful treatment of the source material coupled with Frances’ portrayal of Mildred, acts as a respectful homage to the Fulton family.