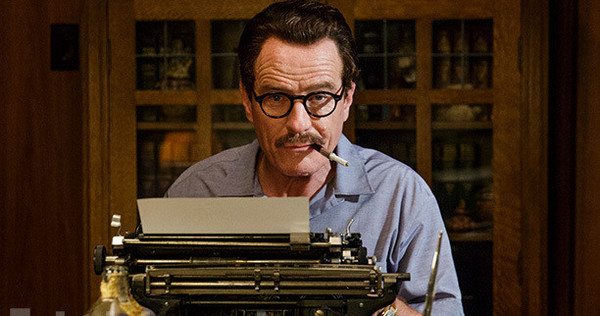 Mostly playing like a HBO film — no surprises given it was directed by Jay Roach, one of HBO’s busiest and best directors — ‘Trumbo’ is still a fine study of writer Dalton Trumbo, one of the top screenwriters in Hollywood, who refused to give names to the House of Un-American Activities Committee, and was jailed. When released from the jail, he was hired by the studios to write but under a different name. Incredibly, Trumbo, the best writer of his time won an Oscar he could not accept, under the name of Robert Rich. One of the infamous Hollywood Ten he was outspoken about labour in the 40s and 50s, a card-carrying member of the American Communist Party (his constitutional right), and interesting personality, Trumbo loved being wealthy, and there was a time he was the richest writer in the business. With an always present cigarette, a large and bizarre mustache, he was a personality all his own.

It is a solid film about a time in Hollywood when money seemed to matter less than one’s political agenda; a time when a dreaded fear of communism wound its way through the industry. In the movie, we see John Wayne speaking out against the reds, Hedda Hopper attacking Trumbo, and finally Kirk Douglas having the courage to bring a screenplay to him and allowing him to get his name back. People forget Douglas broke the ban on Trumbo because he wanted the best writer for his film Spoartacus (1960) about injustice.

Bryan Cranston after being so good on TV in ‘Breaking Bad’ and the comedy series ‘Malcom in the Middle’ is superb as Cranston. It’s showy performance, but not quite strong enough to land him in the Oscar nominations, given the competition. Supporting cast, which includes the likes of Helen Mirren, Elle Fanning, Daine Lane, John Goodman are all good. Overall, it’s a film that is surely an one-time watch, if only, to see how a life and career of one of the most talented writers in Hollywood gets marred by shady politics.