A lot of the times, certain anime shows come off as generic on paper but after being executed properly, they actually prove to be much better. ‘Tokyo Ravens’ is one such anime and as generic as it may seem with its underlying fantasy action theme, it eventually turns out to be a very enjoyable show. More often than not, I criticize light novel adaptations for being too fast-paced, which also has an impact on other major aspects of the show. Now as typical as the plot of ‘Tokyo Ravens’ might seem, I just admire the fact that it does not hold itself back with a 12-episode format and instead, adapts the 24-episode format, making the overall pacing almost flawless. This not only allows it to give proper justice to the source material but also helps with the development of the characters.

Speaking of the characters, they are again no different from your other cookie-cutter stereotypes of the genre. However, despite their one dimensional and predictable personalities, you actually feel like investing in them. This is because almost all the interactions between the characters take time to unfold and are never rushed; this makes their conversations even more engaging. When it comes to the main characters of the anime, a very subtle method has been used for merging their backstories with their present lives to show how their personalities have developed over time. The side characters are also not all that weak but they aren’t too strong either; so maybe the anime could’ve done a little better in that aspect. But even then, each character gets to be under the spotlight at least once during the show and almost no one is left in the background for too long.

Being an action anime, it sure does live up to its reputation and gives you some really memorable battle scenes that have above average animation. But the problem arises when it attempts to use CGI in these scenes and goes way overboard. I personally feel that the CGI was unnecessary and the anime was doing really well without it. Otherwise, there is nothing else noticeably wrong with the animation or art side of the show. The character designs are perfect and the background setup and detailing suit the overall vibe of the anime.

So clearly, ‘Tokyo Ravens’ is nowhere close to being a masterpiece but it isn’t an abomination either. In fact, it can be quite memorable and fun to watch if you can overlook how typical it is, in general. What really works in its favor is its diverse set of characters who have depth and unpredictable personalities. The story and even the CGI based action sequences will take some getting used to but once you get a hang of these, you’ll definitely ask for more. Overall, for me, ‘Tokyo Ravens’ is just another standard anime that revolves around a modern fantasy and though I wouldn’t say that it’s one of the best in its genre, it’s safe to say that it is not a waste of time either. So if you haven’t seen the first season yet, it really is worth a try and you should definitely go for it.

Tokyo Ravens Season 2 Release Date: When will it premiere?

‘Tokyo Ravens’ season 1 released on October 9, 2013 and went on till March 26, 2013. From what we know, there are 11 volumes of the original light novel, out of which only 9 have been covered in the anime. So for now, two volumes are left for the story of the anime, which is clearly not enough for a whole new season. In this case, it looks like the anime production was used solely to promote the light novels. This means that the possibilities of getting a season 2 now solely depend on the sales of the light novel series.

Optimistically speaking, our best guess is that ‘Tokyo Ravens’ season 2 release date could be sometime in 2020 or 2021. Higher the sales, the higher will be the chances of a new season. So as of now, we can’t really say anything about a new season because there haven’t really been any official announcements regarding it. However, we can expect an OVA by the end of 2021 that will conclude the entire anime series. We will update this section as soon as we hear more.

The English Dub of ‘Tokyo Ravens’ is available on Funimation, Crunchyroll, and Amazon Prime.

There was once an old powerful magic technique called the Onmyoudou, which was used by the Japanese during the Second World War. This unique power allowed them to gain an advantage during the war and establish themselves as the strongest force known to all. But before Japan could do what it had intended to do, their power was soon destroyed an onmyouji named Yakuo Tsuchimikado, who causes the “Great Spiritual Disaster”. This event changes not only the entire history of Japan but still affects the people who live there. After this incident, the people of Japan had no choice but to establish an organization known as the Onmyou Agency that takes the initiative of exorcising such incidents and also prevents demons from entering their world.

The magical art of Onmyoudou has become far more common in the present day world and has various real-life applications in several fields such as medicine and technology. However, not everyone is capable enough to utilize these powers and one of these few people is Harutora. But when another member of the Onmyou Agency tries to recreate the sh*t storm that was caused earlier by the spiritual disaster, Hrutora must give up on his comfortable ordinary life and fight by Natsume’s side, to whom he had earlier made a promise. 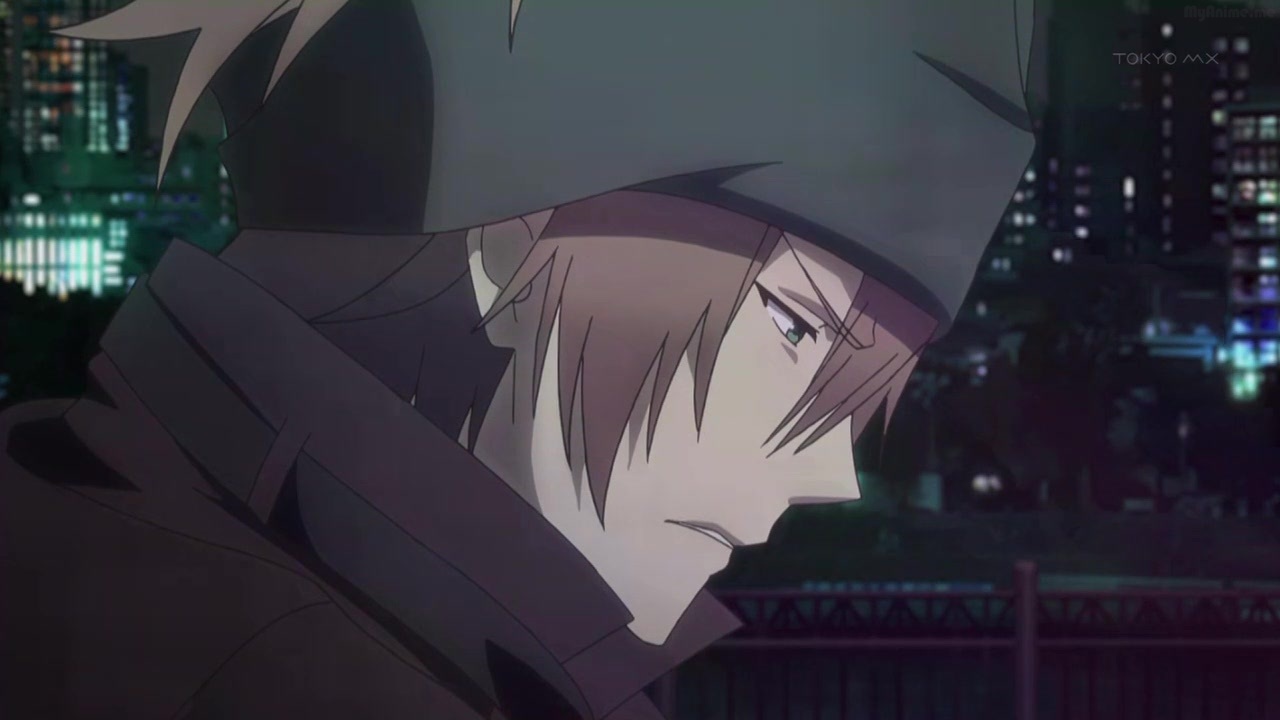 Touji Ato is a former juvenile delinquent, who is presently Harutora’s friend. He’s got a very charming face with brown hair that he keeps tied up with a bandana. He only removes his bandana when he transforms himself into an ogre. He became a partial living spirit and a partial ogre after the Spiritual Disaster and his “ogre form” allows him to develop white hair and shiny strong pieces of armor all over his body to protect him. In the present times, he is very calm and composed and almost nothing can mess up his cool attitude but this hasn’t always been the same. In the past, he was very troubled and would always resort to violence towards anyone who triggered him. He didn’t even spare his family back then but after the events of the Spiritual Disaster, something in him suddenly changes. 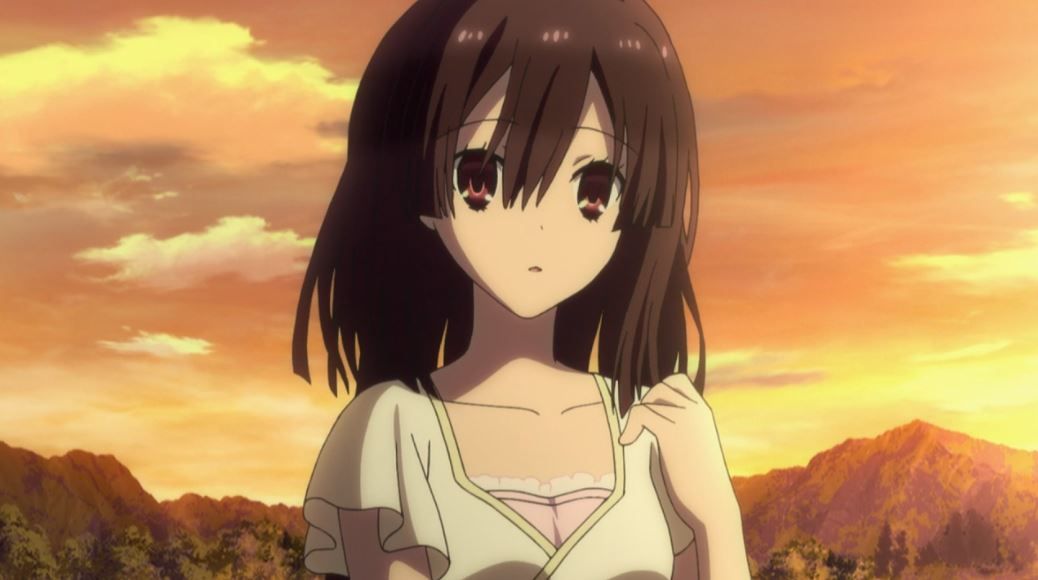 Natsume is Harutora’s estranged childhood friend and also the heir of the main Tsuchimikado family. She is also an Onmyouji who possesses the power of using the magical resource around her. Natsume, for a very long time, was known to be male before her clothes got ripped off in one battle against Shaver. She is one of the strongest known Onmyouji of her age and always remains at the top of her class at the Onmyouji Academy. She deeply cares about all her family members and friends and even starts to develop feelings for Harutora much later.

Her hair is a very dark shade of purple and even her eyes have a similar purple wine kind of color. She has an average height and shows some great athletic abilities that always surprise everyone. Around people, she is usually very shy and modest about her talents. She is even possessive when it comes to Harutora and often gets jealous when he talks to other girls. She has a crush on him since childhood but that does not stop her from being stern with him when it’s necessary. 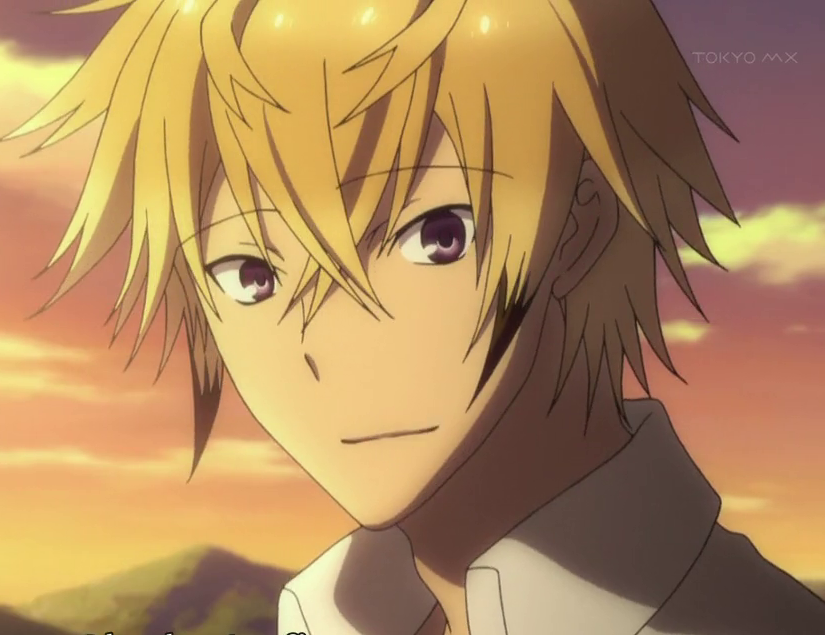 Harutora Tsuchimikado is the rightful heir of the Tsuchimikado family but his father, Yasuzumi decided that it would be better for him to be raised in a different branch of the family. Before giving him away to a new family, his father had decided to seal all his powers so that he could have a stable life with his new branch of family. Later, when Harutora meets Natsume, his magical seal starts to break a little and he acquires Spirit Sight, which is a part of a contract between the two.

Harutora is a cute looking guy who has spiky middle length hair and dark purple eyes. When he turns into Natsume’s Shikigami, a blood-colored star-shaped magic circle appears right below his left eye. Later, when Natsume’s lifts all his seals, he loses this star-shaped mark. Harutora is a very friendly and gentle person who treats everyone as his equals. This is the reason why many people are drawn towards him and even get close to him without giving it a second thought. He often remains naive to the feelings of all the girls around him and never really figures out how much they’re all into him. He has an obsession with tigers and it can be seen everywhere from his jackets to his “lucky” decorative tiger. His admiration for lions probably comes from his own name where “Tora” means “Tiger”.