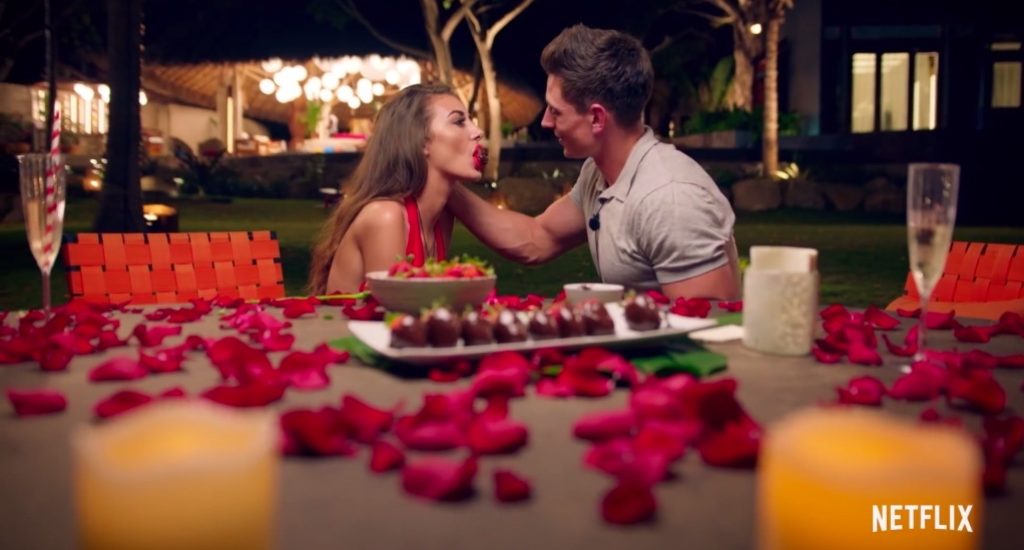 If you thought Netflix was going to let viewers chill after ‘The Circle‘ and ‘Love is Blind,‘ you have been pleasantly misled. The streaming platform has turned up the heat once again. ‘Too Hot To Handle’ is yet another reality series with unimaginably attractive contestants and could easily be your so-bad-its-good fix with its thoroughly entertaining premise.

If you didn’t already know, ‘Too Hot To Handle’ is a dating show, but with one major twist. Basically, a group of extremely attractive and young people is given the opportunity to spend time together at a gorgeous private villa by the beach and earn $100,000. However, the contestants are prohibited from kissing or engaging in any form of sexual activity with each other. If they are caught doing so, a corresponding amount of money is deducted from their $100k jackpot.

If you are looking for some eye-candy, ‘Too Hot To Handle’ is the perfect show for you. And that’s not only because the contestants are super good looking, but also due to its incredibly beautiful filming location. Once you have gotten over the initial shock of watching almost naked contestants, the first question that will hit you is: Where was this show filmed? But worry not! The Cinemaholic has done some investigating and found out exactly where the resort in the show is located… just in case you want to plan your next trip there.

Too Hot To Handle Filming Location

It is quite obvious that ‘Too Hot to Handle’ takes place in a picturesque resort near the sea. There is a pool, a bar and of course, a private beach. “This is literally heaven on Earth,” according to Sharron, a contestant. But you would be surprised to know that the show was actually shot in Mexico.

The Cinemaholic reached out to the location managers of the show and can confirm that ‘Too Hot to Handle’ was filmed in a private estate known as Casa Tau located in the peninsula of Punta Mita in the Mexican state of Nayarit. Punta Mita is actually a private peninsula located on the north end of Banderas Bay. It is surrounded on three sides by nine and a half miles of Pacific Ocean beaches and coves.

Sea is calling… #you #us #them #me #you Are you waiting for… #her #him, #them, #yourself Come and see the #beach #pinksky #sea #fullmoon #milkyway #beunique #beyourself #beautifuldestinations

You will probably recognize this area of the villa featured quite prominently in the show.

The most incredible destination in the world, with the most amazing views, where serenity meets destiny. This is what Casa Tau Represents, a very exclusive way of looking at the world, with a full service resort staff at your service every moment. A destination like no other with 12 bedrooms and bathrooms, perfect for those of us what want to share paradise. Enjoy this amazing villa, we're waiting for you here. #puntamita #luxuryvillas #luxuryvilla #destinationweddings #millionaires #millionairemindset #luxuryliving #luxurylifestyle #vacationrentals #luxuryvillas #luxurrentals #jetsetter #luxury #luxuryretreat #getawayhouse #getaway #exclusive #billionaireboysclub #royalwedding #royalescape #luxurydestinations

Or how about this one:

Do you recognize the pool?

Punta Mita houses various ultra-luxurious villas like Casa Tau and the world-famous Casa Aramara. The peninsula has been attracting celebrities and the super-wealthy for a long time. For instance, Bill Gates invested in 48 acres of seaside property in Punta Mita in 2014. In January 2019, Kyle Richards’ husband Mauricio Umansky rented out the Casa Tau villa to celebrate his wife’s 50th birthday. Here are some of the pics:

Happy Birthday to the most amazing wife. To a great weekend. I want to thank @theagencypdem and #casataupuntamita ita for facilitating and incredible weekend. Thank you @anacarrillo05 for all your help. Best party planner ever.

For those interested, Casa Tau is as inviting in reality as it is on the screen. The villa’s website describes the resort as “Decorated with soothing earth tones, creamy white walls, warm wood accents, and a hay-thatched roof, Casa Tau’s open-air estate is as relaxing as it gets.” If you are still not convinced, let images speak louder than words and have a look at the following video:

Read More: Where is the Love is Blind Set Located?