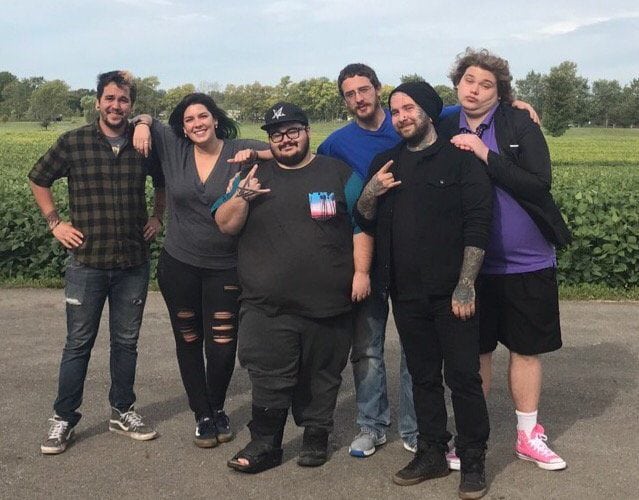 Too Stupid To Die is an American series created by MTV in association with YouTube star Zach Holmes. The series showcases Zach and his friends attempting dangerous and ridiculous stunts and pranks which often result in self-harm and pain. It is based on MTV‘s subculture hit ‘Jackass’ and is produced by the global studio, ‘Gunpowder & Sky’.

Too Stupid to Die Cast: Who’s in it?

At the heart of the series is Zach Holmes, who is a YouTube star who started by uploading videos of pranks and amateur stunts that regularly went viral.

He is joined by a group of his friends, Coty, Megan, Khyler, Damon and Tommy. YouTube star Chad Tepper also stars in many episodes and is one of the leading casts. Chad Tepper is a part of the ‘Team 10’, a famous group of star YouTuber’s. Chad is also a former professional skateboarder.

Too Stupid to Die Plot: What is it about?

Zach Holmes, a YouTube creator and amateur stuntman from Hobart, Indiana first started uploading videos to his YouTube channel titled, Zackass in 2016. These videos featured Zach attempting ridiculous stunts and pulling off pranks on people. The insanity of these stunts made his videos go viral across multiple social networking platforms. The hot-headed adventurer was banned by YouTube because of bizarre pranks, hilarious tricks and appalling stunts he pulled which include splintering a rat trap to his nose, manoeuvring a power drill for slotting a metallic screw into his earlobe and plopping a washing machine from a high-end building window in a way, which can hit him in the crotch.

In October 2000, MTV premiered a similar stunt show titled Jackass that became a subculture hit and was a huge commercial success. Zach’s videos were noticed by MTV, and Too Stupid To Die was conceptualised to recreate the vibe of Jackass once again. According to an official MTV statement, Too Stupid To Die is the story of a backyard group of friends who are trying to make a name for themselves with nothing but blood, sweat and fearlessness. When asked about the origins of how he came up with the idea, Zach Holmes said that it is something that is a product of utter boredom, since there is not a lot to do in Indiana.

Zach Holmes pulls off his unorthodox stunts with a group of his friends, some or all of whom appear in each episode of Too Stupid To Die. YouTube star, Chad Tepper joins the gang frequently in the show. The cast is sometimes joined by Zach’s grandmother who he affectionately calls, Meemaw.

Too Stupid To Die features some of the most bizarre stunts that often inflict harm and pain. One of the stunts that possibly caught MTV’s attention was titled, ‘Suicide Vest’ and saw Zach Holmes wearing a suit filled with firecrackers that exploded peeling off his skin at many places. Zach suffered some serious injuries due to this stunt. Another of the stunts in Too Stupid To Die features Zach hitting himself with a paintball gun at point-blank range. This caused him to lose one of his front teeth. One episode saw the entire gang attempting to use electric tasers and stun guns to stun each other. Another episode saw the gang trying to jump their skateboards over a wild cactus full of thorns.

The insanity of these stunts is mind-boggling, and if you are someone who is easily affected by body mutilations, it would be best to keep away from this show. Zach and the gang often end up seriously hurting themselves often bleeding or passing out while attempting these stunts. The idea of feeding people with humour and entertainment through self-harm itself is a bit hard to digest, but Zach and his gang don’t think so. Zach admits that he might have a really strong pain tolerance level. However, he does feel pain and often regrets doing something later when the pain kicks in. Each stunt on Too Stupid To Die is celebrated on its success.

The magnitude of the stunt decides the magnitude of its success. Some stunts are humorous and simple that are pulled off in the backyard, while others are elaborately created.

Each episode of Too Stupid To Die starts off by flashing the ‘do not attempt these stunts at home’ sign. However, many have criticised the show for its violence and insensitive content. Parents have specially come forward in numbers trying to get the show off the air as it has a big potential of kids getting affected and trying it at home. The show also features regular use of foul language and alcohol. Zach Holmes’ YouTube channel was banned due to its strong and violent content but was later unblocked.

Too Stupid To Die is not a show for the faint-hearted. Not everyone would see the funny side of this show either. However, if you are someone who loves pranks and are fascinated by stunts, Too Stupid To Die is probably a show you would absolutely enjoy.

Too Stupid to Die Season 2 Release Date: When will it premiere?

Too Stupid To Die season 1 premiered on August 21, 2018, with back to back episodes every week. Each episode is 45 minutes in duration. The show received average ratings and was criticised by many for being too violent. Fans of the show have been waiting for any news regarding season 2. However, as of now, there is no official news from MTV or from Zach’s personal social media accounts. If the show gets renewed, there is a good chance we will hear something about Too Stupid To Die season 2 before December 2019. Until then, stay tuned while we find out!

Too Stupid to Die Trailer