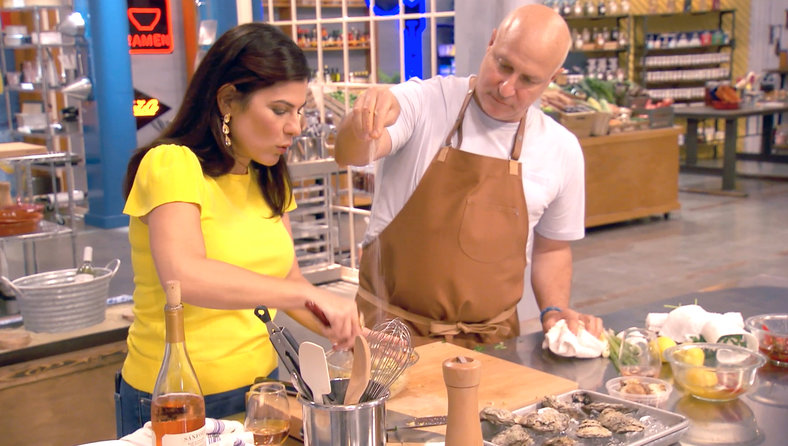 Last week, in ‘Top Chef’ season 17, we followed the cheftestants as they went on a summer camp to feed brunch to 200 hungry mums. Bryan Voltaggio won the elimination challenge and sadly, Lee Anne Wong’s clafoutis turned out to be steamed instead of baked. She later had a face-off with Kevin Gillespie in ‘Last Chance Kitchen’ and again lost her final opportunity. This week, the six remaining All-Stars reach a coliseum to create the perfect, traditional Japanese Kaiseki meal to commemorate the Tokyo Olympics. Now, keeping aside the events of the last episode, let’s get ready for another power-packed week. Read on to know everything about ‘Top Chef’ Season 17 Episode 11.

Top Chef Season 17 Episode 11 Release Date: When Will It Premiere?

In the upcoming episode, titled, ‘Michael’s Santa Monica’, “Tom makes his final decision from “Last Chance Kitchen” on who should return to the competition; the chefs take off in a Quickfire with Padma and Jonathan Waxman making a two-course business class dish for an airline” — according to Bravo.

In episode 10, the quickfire challenge introduces pastry super-chef Sherry Yard as the guest judge. The task involves baking a dessert but in order to earn the ingredients, the contestants need to guess them correctly while blindfolded. While Karen attempts to make a panna cotta, Brian experiments with “a little cake recipe”, Melissa tries to create an olive oil pistachio cake. Bryan is making a coconut, flour, butter, and sugar textured curd, Gregory prepares chocolate curd, and Stephanie cooks a crostata. Finally, the winner of the round is Melissa.

In the elimination round, the contestants need to cook a six-course progressive Kaiseki meal for an elite group of Olympic athletes. The guest judges are Niki Nakayama and Carole Iidi-Nakayama. At the judges’ table, chef Bryan Voltaggio’s dish is the panel’s favorite. All of the other chefs land at the bottom. Although each chef had technical faults, Tom points out that Karen’s duck was not grilled properly, and she is the lowest scorer for the round. She will progress to ‘last chance kitchen’. THE END!

Read More: The Places Where Top Chef Was Filmed