‘Tremors: Shrieker Island’ is the seventh film in the titular franchise, and Michael Gross reprises his role as the legendary Graboids hunter, Burt Gummer. The story revolves around these extremely dangerous creatures that kill humans. If you’re familiar with the movie franchise, then you would know that the plot usually encompasses a healthy dose of humor and horror to further the story. If you’re curious about what the deal with the ending is, then you’re at the right place!

Bill is a very wealthy man who feels that life and death are the only currency that matters to the rich. For this reason, he hosts a hunt on his private island with some Silicon Valley hotshots where they chase down Graboids, a vicious and predatory species that has been revived by his biotech company. They even shoot one down with poison darts.

On the other hand, there is the AVEX BIO Wildlife Preservation Outpost – comprising the conservationists, including Jasmine (who goes by Jas), Jimmy, and Freddie, who toil hard to protect the jungle. One day, when they see Bill on a boat with his group of hunters, Jas, Jimmy, and Ishi go to check what is going on. But what they see is not pretty – an eco-skeleton of the Graboid. It turns out three shriekers (the second stage of development for the species) are now loose in the area. One even kills Ishi, following which, the remaining two go back to the base camp.

Jas gives Jimmy the responsibility of finding Burt Gummer, the only man who can save them from this perilous situation. His last known coordinates indicate that the legendary survivalist is living in isolation on an island in Papua New Guinea. Jimmy tracks Burt down and convinces him to come and help them. The rest of the movie follows the group as they try to bring down the Graboids and shriekers.

Despite having lost many people in his hunting party, Bill is adamant about killing the Graboids himself. Although he keeps refusing to call for backup, Burt tries to talk some sense into the man. However, the predatory creature approaches them from beneath the bridge and kills Bill. Burt makes his way back to the preservation camp and tells his teammates that Bill was an enemy of the being and not just its prey. 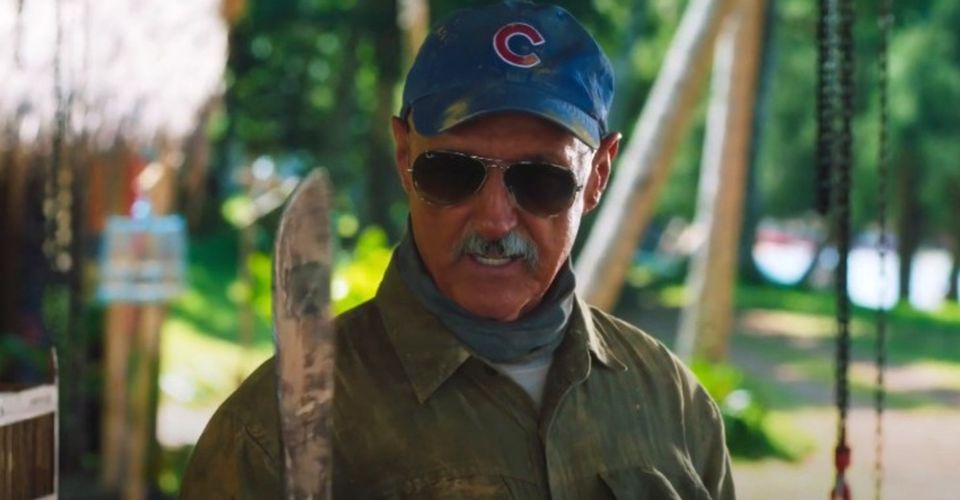 Jimmy asks Burt why he wasn’t attacked, to which the latter responds by saying that the Graboid is cutting down the weakest links first. Jimmy suggests locking down the camp and securing its perimeter, but Burt feels it is imperative to eliminate the shriekers on Dark Island before they become even more threatening. The team notes that there is a cliff above the Devil’s Punchbowl (an inactive caldera). This is affixed as the perfect location to lure the last remaining Graboid and kill it.

Another advantage that it gives them is that at noon, the temperature will be higher than the human body’s (at 100 degrees Fahrenheit), rendering the creature’s heat detection abilities weak. Burt then tells Freddie to rig the area with TNT. Before Jimmy and Burt leave to kill the shriekers in the cave, Jas apologizes to the latter for keeping him separated from his son. An honest conversation about their past ensues.

On the other hand, Jimmy is feeling very unprepared as he is just a kid from the suburbs, but Freddie snaps him out of it and encourages him to complete the mission. Once the two men are in the cave, Burt says that there should be nine shriekers. They then proceed to cover themselves in mud in order to hide their heat signatures. Jimmy is instructed by Burt to attack the creatures in their soft spots. One by one, the duo is able to kill all of them. In fact, the old man even lights a couple of them on fire with his flamethrower. 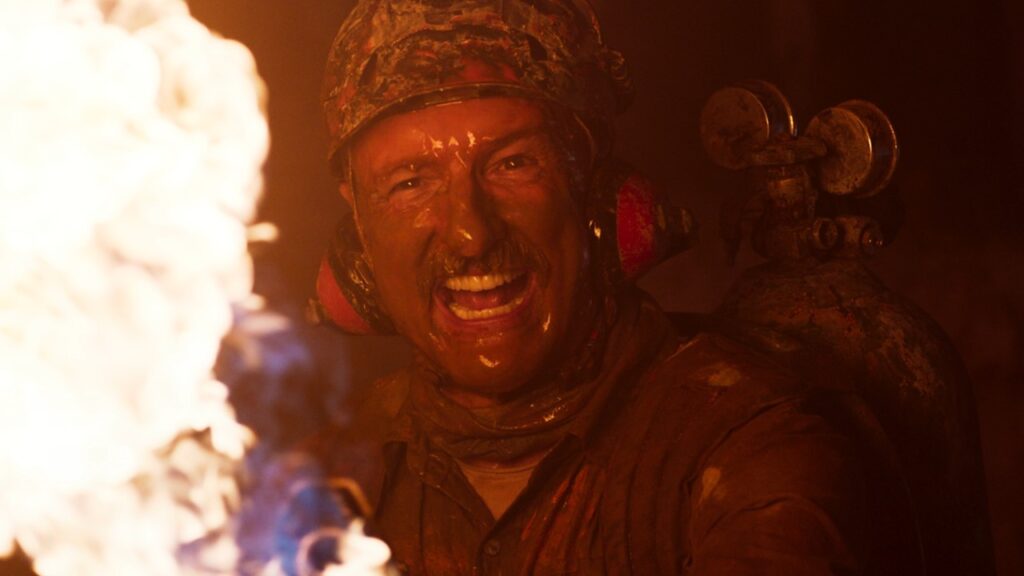 Back at the camp, the queen Graboid has arrived, and Anna tells everyone to get to higher ground. When Burt and Jimmy come back, she informs them the creature is right beneath them at a depth of 12m. Then, Burt tells Jas and Jimmy to leave the camp, but she expresses concern for his safety. To this, Burt responds by saying that if he were to die, then at least she’d get her sunglasses back.

The plan is that Burt will rendezvous with everyone at Devil’s Punchbowl after luring the Graboid there, and following this, Jimmy and Jas leave the camp. The predatory being starts moving beneath the surface towards Burt. Although the TNT surrounding the area explodes, the Graboid is not really injured. Then, Burt proceeds to the cliff on horseback, with the carnivorous being on his trail.
Jimmy and Burt discuss that they will work together to throw the creature off the cliff.

But when it attacks the duo, Burt pushes Jimmy out of harm’s way at the last second and even shows him the middle finger before seemingly being devoured by the Graboid that falls into the caldera and gets blown up by the TNT. The team is happy about their victory against the creature, but Jimmy starts calling out for Burt, who is nowhere to be seen. 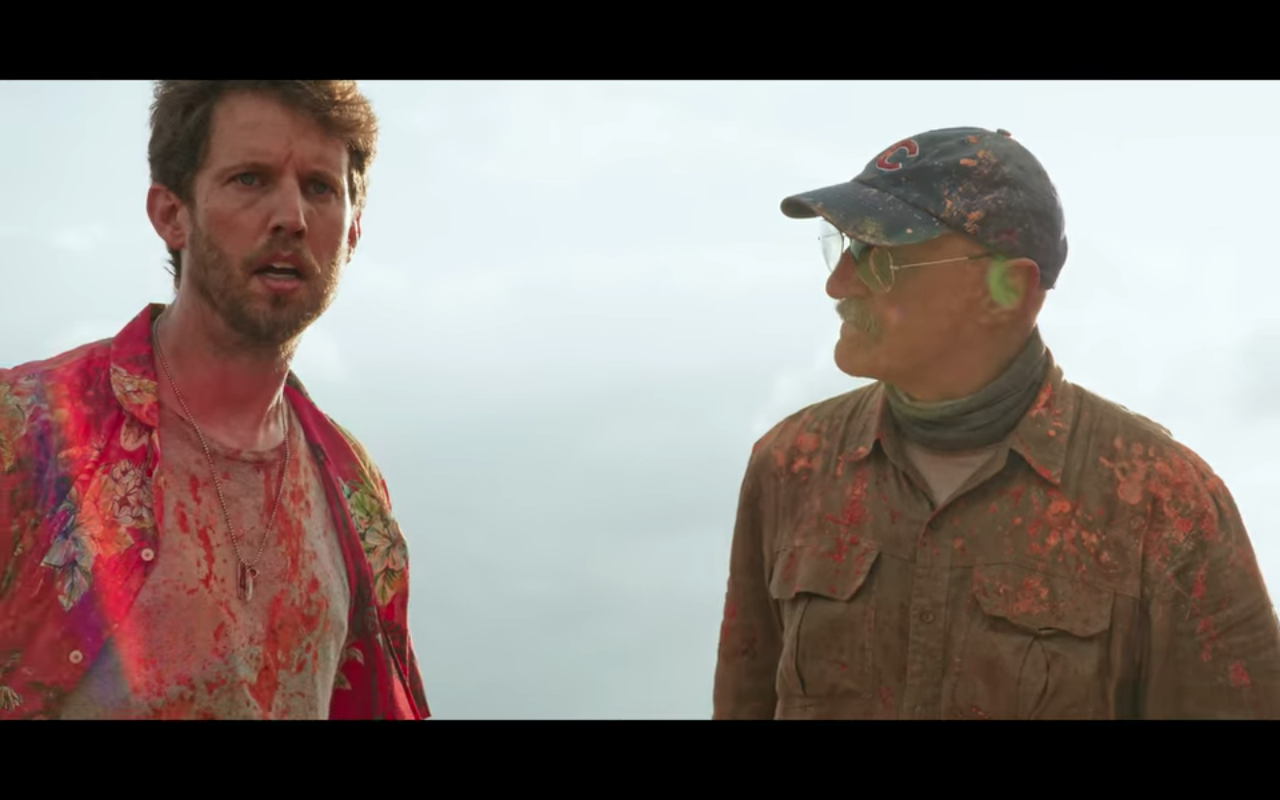 The conservationists realize the price they had to pay for their victory and construct a small grave for their fallen comrade. Jas leaves her shades there, whereas Jimmy bequeaths the blue cap that Burt was wearing. The climax includes a montage of the acclaimed survivalist from all the films in the franchise. Furthermore, there is an announcement that states that Gummer Day should be celebrated on April 14th, and it also reminds us to pay our taxes.

Is Burt Gummer Dead or Alive?

‘Tremors: Shrieker Island’ has an ending that leaves things quite open-ended. What exactly do we mean by that? Well, based on what the plot tells us, there is a high probability that Burt Gummer has perished. Firstly, we do see him enter the Graboid’s mouth. Then, there’s the fact that the creature immediately falls into the caldera and is impaled by the TNT explosions. So until and unless Burt was able to escape from the monster at the last minute, the chances of his survival are slim.

In a conversation with Comic Book, Michael Gross said, “Universal and the director [came] to me with this idea, and they said, ‘This could be emotionally very powerful, if we have to say goodbye to this man after 30 years.’ And I hemmed and hawed, and I thought about it a little bit. And I said, ‘You’re absolutely right about the emotional gut punch this can be.’ And I said, ‘You’re going to hurt a lot of people’s feelings.’ And I said, ‘But I thought this franchise was over after four. So I could certainly live with it being over after seven.’” 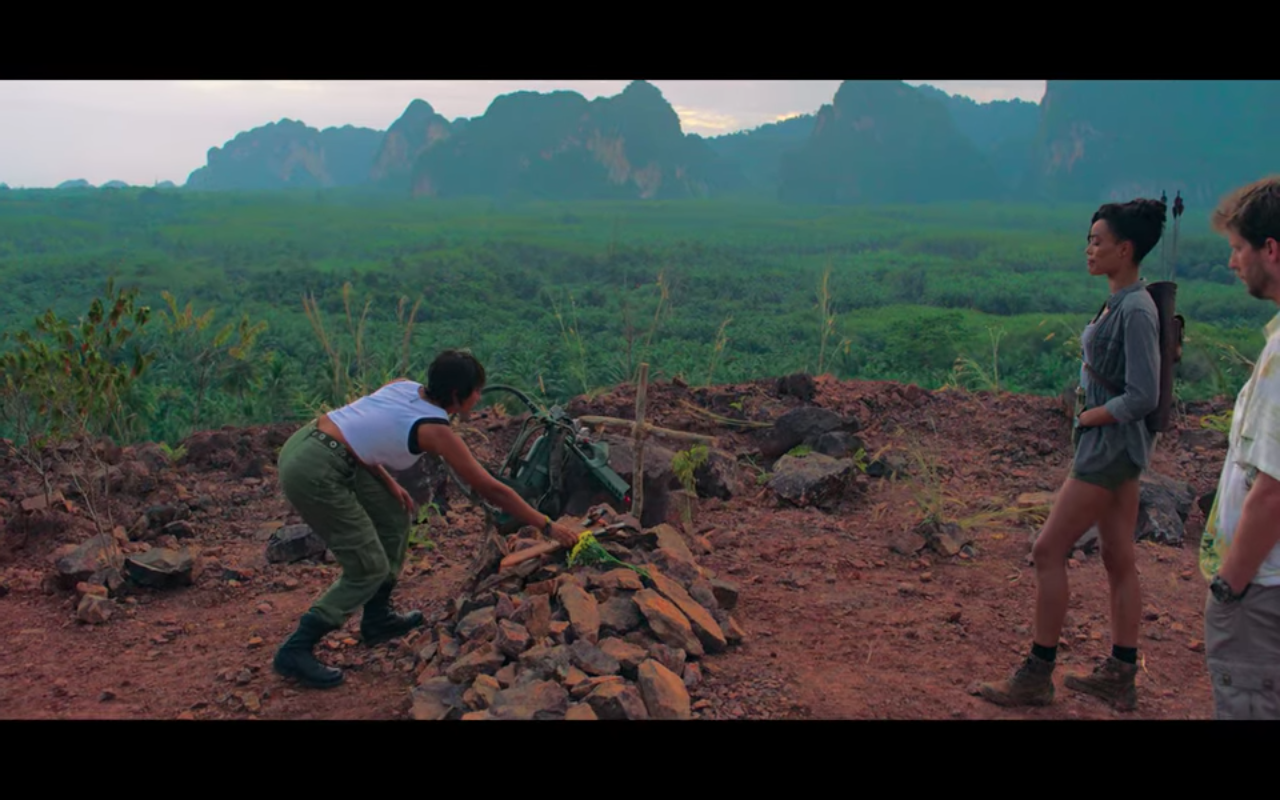 However, it is imperative to note that while Burt Gummer is not seen again, no evidence conclusively affirms his death. Many action movies regularly employ a similar rhetorical technique to not commit to a particular plot point. Moreover, in the same conversation, the actor said, “What we negotiated — well, it wasn’t really a negotiation, we all agreed on this — is that we kind of left the door open. Because although Burt is gone, we never see a corpse. We never see his remains.”

He added, “Everybody assumes he’s gone. Is he buried somewhere? Is he unconscious somewhere? We never see Burt dead. We see Burt gone. We see Burt not returning. What does that mean? Has he been knocked out? Does he have amnesia somewhere? Does he wander off? Is he in a kind of coma? So yes, the way it ends is pretty profound.”

There is no news of an 8th movie just yet, but we believe that this is the end of the road for the legendary character. Why? Well, because they can always pass on the torch to Burt’s kid, Travis B. Welker. If the latter does become the protagonist, then his father’s death will definitely serve as an emotional trip to annihilate the carnivorous species. But we just have to wait and watch which direction the filmmakers take the story in.

Read More: Where Was Tremors 7 Filmed?