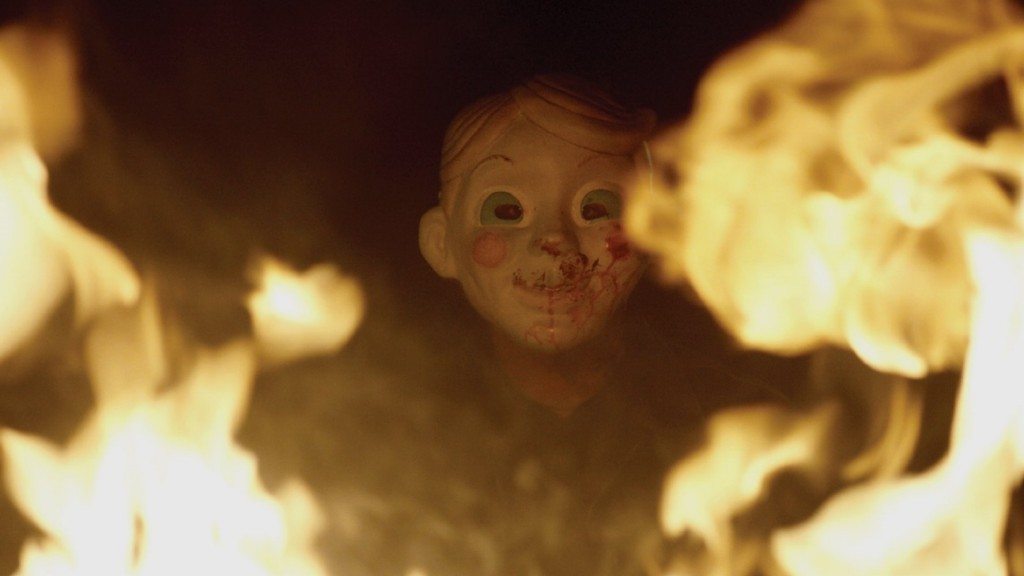 Mickey Keating’s ‘Psychopaths’ works because it knows exactly what it is – a ludicrous, ridiculously over-the-top and unabashedly gory and grisly horror film. The movie is the seventh feature from Keating, whose work indicates a strong passion and appreciation for the twisted. He has a lot of room to grow as a director but his recent efforts signal that he is going to be an exciting talent to continue to watch (his 2015 film “Darling” is worth seeking out for its bizarre narrative and gorgeous black and white cinematography).

The movie hits the ground running, featuring a creepy message from Henry Earl Starckweather (Larry Fessenden), a known serial killer about to be executed. His departing words warn of a “night of chaos,” where brutal murders will occur throughout the evening – think “The Purge” but less political. The titular psychopaths include Blondie (Angela Trimbur) and Alice (Ashley Bell), who escaped from an overturn bus from a mental hospital. Thrown into the mix is Mask (newcomer Sam Zimmerman), who stalks the city in a variety of masks with his own deadly agenda.

Most of “Psychopaths” feels slight, like a series of vignettes in search of a larger narrative, but that doesn’t mean it isn’t any fun. Keating finds creative ways to get under your skin and affect you by the onscreen carnage. The film feels like a loving wink to horror films of the 70s and 80s, featuring wipes and split screens, along with a narrator guiding us on this blood-soaked journey.

As the movie comes to a close, the narrator says, “Sorry if the violence was too gratuitous and the story was too ambiguous,” which is an interesting contradiction, of sorts, for “Psychopaths.” If anything, it reiterates the movie’s self-aware style but also, it’s interesting that anyone in this movie – narrator or otherwise – would mutter the word “sorry” in something that is so unapologetic.

“Psychopaths” is a dog whistle for midnight movie fans, who are likely to cringe and laugh in equal measures.