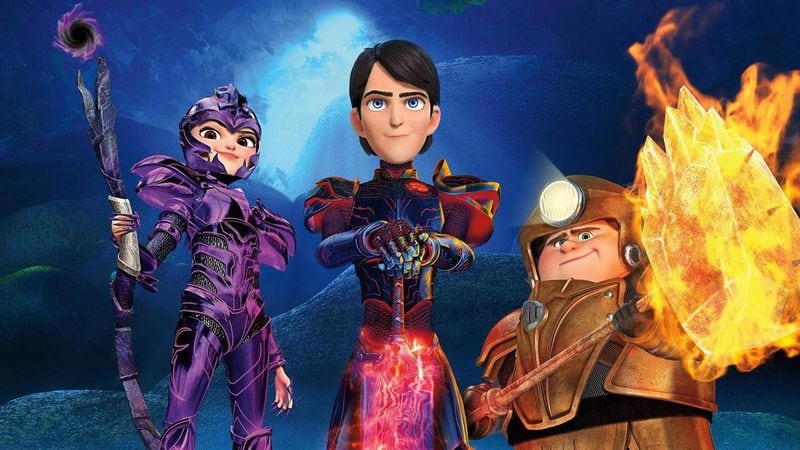 Trollhunters is an American computer based-animated series created by Oscar-winning Guillermo del Toro for Netflix. It is produced by DreamWorks Animation and Double Dare You Productions. Much like Guillermo’s successful past ventures, the storyline of Trollhunters is fantastical story that follows a teenage boy named James Lake Jr. who stumbles upon a mysterious amulet opens doors to a secret realm that is inhabited by trolls and other magical creatures. Later, he teams up with his friends to protect our world from dangerous monsters that threaten the peace of the town.

Guillermo del Toro is well known for films like Pan’s Labyrinth and The Shape of Water. He creates the world of dreams, monsters and other fantastical elements and makes them look believable. In that sense, Trollhunters is just another feather in his cap because this time he uses an animated kids tale to tell an amazingly affecting story.

The show first premiered on 8th October 2016 at the New York Comic Con. Soom after, Season 1 made its debut on Netflix on 23rd December 2016.  Season 3, that premiered on 25 May 2018, marks the end of the series but it is expected to be followed two chapters that continues the story of Jim.

Trollhunters received some excellent reviews from critics. The show received a rating of 94% on review aggregator website Rotten Tomatoes. The website’s consensus reads, “Trollhunters manages to capture del Toro’s enthusiasm for telling monster stories, in a youthful and more colorful fashion that may well earn him a new generation of fans.” On Metacritic, the season has a score of 69 out of 100 based on 7 critics, indicating favorable reviews.

Trollhunters Plot: What’s it about?

Jim is like any other kid who lives with his mom. He harbours in his heart a strong desire to have a life full of adventures. His wish gets fulfilled when he comes across a magical amulet under a bridge that leads him to becoming the first human troll hunter ever. Along with his friend Toby Domzalski, he discovers a world of trolls and other magical beings. He finds his mentors in Blinky and AAARRRGGHH who train him and warn him about the threats of the Gumm Gumms who intends to release their leader Gunmar the Black to conquer both the troll and the human world.

In this magical journey, Jim and his friends will set out to find new friends and make enemies as a war brims, threatening to do significant damage and bring further problems in their lives. In the concluding season of the show, Jim Lake who has put together a team of humans and troll allies will come face to face with Gunmar and his vile troop in an ultimate battle. There is a very satisfying conclusion to the story of Trollhunters that the confrontation brings. Some twists and turns will have fans debating over for years to come. It also sets up a thrilling scenario for the wild adventures ahead in “Tales of Arcadia.” Trollhunters comes to a wrap in a finale that is rewarding for fans and their many years of devotion towards the show. A lot can be expected from the upcoming Trollhunters: Tales of Arcadia.

Trollhunters Cast: Who’s in it?

Anton Yelchin and Emile Hirsch are the voices behind James Lake Jr, the main character of the series. Charlie Saxton lends his voice for Toby. Jonathan Hyde comes in for Walter Strickler, Kelsey Grammer as Blinky, Fred Tatasciore as AAARRRGGHH, Lexi Medrano as Claire Nuñez, Victor Raider-Wexler as Vendel, Ron Perlman as Bular and Amy Landecker as Barbara Lake.

Trollhunters season 3 released on May 25, 2018. It consisted of 13 episodes. Unfortunately, season 3 marks the end of Trollhunters. Netflix announced in April, 2018 that season 3 is the finale of Guillermo’s award-winning series. But fans of the series needn’t be disappointed as the thrill isn’t over. Guillermo del Toro announced that Trollhunters would be the first chapter in a trilogy of television series entitled Tales of Arcadia. The story is to be continued in a science fiction inspired follow-up series entitled 3Below: Tales of Arcadia, and the trilogy will be concluded in a third and final fantasy series entitled Wizards.

Check out this Trollhunters trailer to refresh your memories. If you haven’t seen the show yet head over to Netflix to catch all the episodes of the previous seasons.