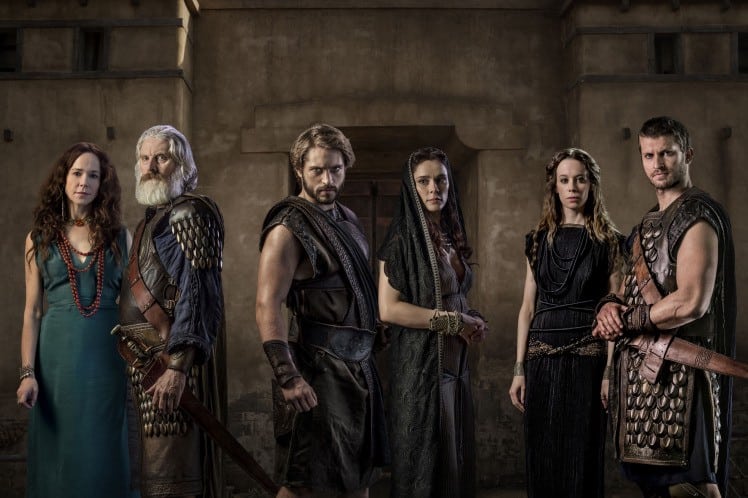 ‘Troy: Fall of a City’ is a British and American series that airs on BBC One in the United Kingdom and internationally on Netflix. The series first premiered on February 17, 2018, and is a co-production between BBC One and Netflix. It vividly revives the Trojan battle between the Trojan and Greek armies. Sitting in the historic annals of Greece as a battle of pride, lust, and the demise of the great Achilles, the series revisits the period and recounts the love that brewed between Paris and Helen. For a reference point, Wolfgang Peterson’s 2004 epic-drama ‘Troy‘ is also based on the same war, albeit it takes a different route and focuses on the war. And it has a much better cast including Brad Pitt as Achilles, Eric Bana as Hector, Orlando Bloom as Paris and Diane Kruger as Helen.

Despite very high expectations from the show, considering the budget involved and the rich source material, the execution was not up to the mark and was ultimately disappointing. The viewership ratings were also rather low. However, critics did praise the show, especially the set design, costumes, acting, the portrayal of Helen, showing the psychological effect of the war, and the inclusion of Gods. However, they were quick to pan the show’s dialogue. Despite the apparent poor writing, the show stuck to the original source material which polarized views, with some praising the faithfulness, and other critiquing the lack of originality.

Troy: Fall of a City Cast: Who is in it?

The main cast of ‘Troy: Fall of a City’ includes actors and actresses that play out characters from history, reenacting the Trojan war. We see Louis Hunter as Paris and Bella Dayne as Helen of Troy. It is no mystery to fans of literature or history that it was the illicit love and subsequent elopement of Paris and Helen that instigated the Trojan war.

David Threlfall appears as Priam, the King of Troy, and father to Paris and Hector. Hector, the older brother, and a celebrated Trojan warrior is played by Tom Weston-Jones. Joseph Mawle appears in the role of Odysseus who was an important factor in winning the war.

Johnny Harris plays Agamemnon, the king who waged the war against Troy on behalf of Menelaus, the wronged husband of Helen. Menelaus is played by Jonas Armstrong. David Gyasi is Achilles and those who have seen the movie know just how important that one warrior was in the entire course of the assault against Troy.

There are several other characters including the Greek Gods, Hermes, Zeus, Hera, Athena. Together these characters manage to capture the essence and magnitude of the Trojan War, which has become a cornerstone moment of human history.

In the upcoming season, most of the main cast will not return, since the plot will focus on Odysseus’ journey back to his wife and the adventures and dangers that befall him on the way. However, we will see some new characters, like Telemachus, Odysseus’ son, Poseidon, the god of seas, and Calypso, someone who held Odysseus prisoner for some time.

Read More in TV Preview: The Standups |  The Rain | The OA

Troy: Fall of a City Plot: What is it about?

The main plot of ‘Troy: Fall of a City’ revolves around the Trojan War between the Trojan and Greek armies after Paris, the brother of Prince Hector, abducted (well, she agreed to it) Helen, the wife of the Spartan King Menelaus. The 10-year siege that witnessed a countless number of innocent lives being lost and millions of worth of property being destroyed and pillaged becomes a center attraction o the show, with Paris and Helen’s love angle also taking precedence. The viewers are shown how Agamemnon used the insult to Menelaus to finally get Troy to submit to Greece.

The story about how the walls of the city could not be breached, and how the Trojan horse was finally sent in is well known to everyone. However, what I liked about the show, being a student of literature, is how they kept the aspect of Gods as we see in the ‘Iliad’. Though they do not appear as much in the show, they have not been made fantastical, and have been shown to be toying with humans as though they were pawns.

Moreover, the series shows how the women of Troy are the true victims of the war since they not only lose their loved ones in battle but often they have legitimate solutions to problems, which despite the apparent egalitarian appearance of Troy, is ignored in favor of the pride of the men who are in ruling positions. All said and done, the story is an enjoyable watch, but could have included a few more battle sequences, since it is, after all, one of the greatest wars ever fought.

The upcoming season will be based on Homer’s ‘Odyssey’ and will focus on Odysseus’ journey back to his wife Penelope and son Telemachus in Ithaca. At the same time, we know of the fate that lies waiting for Agamemnon when he returns to his wife Clytemnestra. However, the season should mostly focus on Penelope trying to fend off suitors who want her hand due to her beauty and wealth, all the while unaware whether her husband is ever coming back or not. On Odysseus’ part, his journey is no smooth sailing either, literally, since he has to face the dreaded Cyclops, some Sirens, and when coupled with some meddling from Poseidon and Athena, we are in for an epic season.

Troy: Fall of a City Season 2 Release: When will it premiere?

‘Troy: Fall of a City’ Season 1 premiered on February 17, 2018. As far as the next season goes, we don’t have an official announcement yet. Though in an interview, Farr cleverly hinted at the prospects of another season: “We do have ideas for a second season. Without giving away spoilers, Homer did write the ‘Odyssey’.”Our best guess is that if the show does get renewed, ‘Troy: Fall of a City’ Season 2 can release sometime in February, 2020. We will update this section as soon as we hear more.

Troy: Fall of a City Trailer:

While we wait for an update on ‘Troy: Fall of a City’ Season 2, check out the season 1 trailer to refresh your memories. If you haven’t seen the show yet head over to Netflix to catch all the episodes of the previous season.