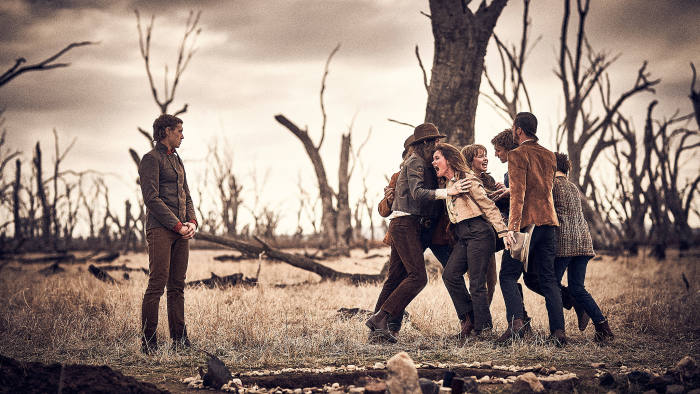 ‘True History of the Kelly Gang‘ is a groundbreaking British-Australian movie that adapts the Booker prize-winning novel of the same name by Peter Carey. The film tells the story of the Australian bushranger, Ned Kelly who has become a mythical figure in Australia. George MacKay plays the role of Ned Kelly in this beautifully shot period film. Russell Crowe essays the role of Harry Power while Charlie Hunnam plays a pivotal role. The film has received critical acclaim for presenting a distinctive take on the life of the “Australian Robin Hood.”

Where Was True History of The Kelly Gang Filmed?

“Carey has given Kelly back his tongue with a style that rips like a falling tree,” a reviewer writes about the eponymous novel that ‘True History of the Kelly Gang’ is based on. The same description can be used for the movie as it boasts of gorgeous cinematography that captures the vast, Australian landscape poetically. Hence, it is natural for viewers to wonder where the outlandishly picturesque locations seen in the movie are actually located.

Apart from Dockland Studios, filming was also undertaken at Lake Mountain Alpine Resort on 1071 Lake Mountain Rd, Marysville. Here, scenes set in snowy weather had been filmed. Furthermore, several scenes had been shot in the town of Kallista in Greater Melbourne.

Have a look at the following Twitter post. The user claims that filming was also carried out at Old Melbourne Gaol on 377 Russell St.

Really enjoyed seeing The True History of the Kelly Gang at @cineworld. Nice to see a less familiar piece of history explored on screen and scenes in Melbourne Gaol – exploring it on my first visit was fascinating. 🇦🇺 pic.twitter.com/C4JqqIy9ap

Yet, the most important filming location for the movie was certainly the Winton Wetlands. “The Winton Wetlands, they were deep in Kelly Country, not far from the old Kelly home at Greta and also Glenrowan, where Ned and the gang wore, for the first and last time, their dramatic suits of armour in a final shoot-out with police. There were pictures of Kelly everywhere, Kurzel says, in the hotel, the deli. “It was a theme park of Ned,”” according to Sydney Morning Herald.

Filmed in multiple locations in Victoria, including @wintonwetlands, Justin Kurzel’s ‘True History of the Kelly Gang’…

Additionally, filming also took place in the town of Monegeetta. To be more specific, several scenes had been filmed inside a historic mansion known as Mintaro, which was built in 1881, a year after Kelly’s death. The Mintaro mansion is not to be confused with the Australian town of Mintaro in the state of South Australia. The Mintaro mansion in Monegeetta doubles up as a brothel for the movie.