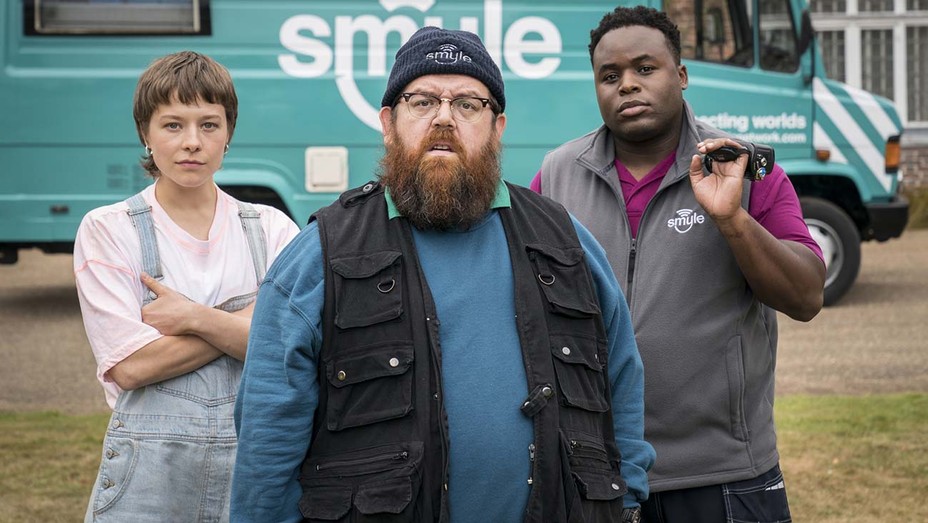 Be it horror, comedy, jump scares, a crazy scientist that craves eternity, the transference of spirits, or ghosts, ‘Truth Seekers’ has it all. The fascinating narrative follows a group of paranormal investigators as they examine different locations for their small YouTube channel. But soon, it becomes clear that a bigger conspiracy is afoot. It stars Nick Frost, Emma D’Arcy, Susie Wokoma, Samson Kayo, Malcolm McDowell, and Simon Pegg. So, if you’re curious as to what the ending is all about, then don’t worry, because we have got your back. (SPOILERS AHEAD)

Gus Roberts, a widower, lives at home with his father-in-law, whom he lovingly calls dad. Although he is the best broadband installer at Smyle, his real interest lies in everything paranormal. One day, when he is partnered at work with a man called Elton John, this fascination is only furthered when the two investigate eerie occurrences at the properties where they go to set up broadband.

During these escapades, they also meet Astrid, who claims that she is being tormented by spirits and ghosts. Eventually, their adventures take them to many seemingly haunted properties where they continue to shoot content for Gus’ YouTube channel. Each location reveals some new secrets, and soon, the gang realizes that they need to stop a crazed scientist, Dr. Peter Toynbee, who will stop at nothing to gain immortality.

Gus, Elton, Helen, and Astrid arrive at the abandoned site where Dr. Toynbee is preparing to carry out the ascension. In the meantime, Dave and Bjorn are able to narrow down the location of the hacker. Once he is a few miles away, the boss spots a blue flower on a table. Unfortunately, Smyle is losing its signal in the Portland area, and so he rushes back to the office and asks Bjorn to call Gus.

At this time, JoJo 74 gets in touch with Gus, telling him not to go to Portland. Furthermore, she points out that the puppet masters she had informed him about have sprung into action. Just as she asks him to not trust anybody, Gus gets a call from Dave. The boss says that he can help them but that Gus needs to believe him. The amateur paranormal investigator is then tasked with getting the signal to full strength before the eclipse reaches its totality.

Dave states that he can handle the situation once Gus finishes his part, but then, the call is dropped. Immediately after this, a lady is heard saying the code “1.9.5.7.” over and over again on the van’s radio. Helen and Gus stay back to infiltrate what has basically become a cult, whereas Elton and Astrid head to the hotel to fix the problem with the machine. On the drive there, the two have an honest conversation about her mortality.

Although Helen finds Richard, some suspicion is soon cast on her as she talks about leaving the premises instead of discussing Eternis. She is caught, and a nanobot is placed in her eye as well. Back at the Smyle office, Dave starts rolling out the 8G technology, which will render the bots useless, foiling Toynbee’s plan. At the Portland Beacon hotel, Astrid enters the machine to try and get Elara to unblock the signal. However, the girl is quite loyal to the doctor and refuses to let the paranormal investigators have their way.

Then, Toynbee commences the ritual. At the office, Dave reveals that the Smyle signal also acts as an insulation against the paranormal world, essentially rendering any inter-dimensional interactions useless. Gus is successful in his mission, and in the nick of time, everybody is saved by 8G. Everybody except for Toynbee, who has slashed his throat and dies a meaningless death.

Unfortunately, the one unintended consequence of the whole plan is that Astrid is not able to leave the machine, hence severing her bond to the material plane. However, Gus reassures Elton that they will find her again someday. JoJo 74 visits Dave in his office and tells him that the wig is too obvious but that he looks good in a suit. She also accepts that using Toynbee for her plan was a mistake.

She adds that the scientist was too obsessed with immortality and could not see the bigger picture. Dave says that humans should not be given tasks that are better accomplished by super-beings. JoJo 74 feels sorry for Astrid, and Dave says that he would not want to be in her place right now. As they leave, the painting on the wall turns into a face from which a woman is heard saying, “Hello?”

Dissecting The Final Conversation Between Dave and JoJo 74

Dave and JoJo 74 are on good terms, and it is evident. In fact, the conversation also establishes that the pair have known each other for a long time. For one, she asks him, “What on Earth have you come as?” He takes out a paper and shows her the figure of a man drawn on it. He says, “Same as always.” She also notes that he is in clothes this time. Hence, the obvious inference is that they have been together through different experiences in life.

JoJo 74 would never have worked with Dr. Peter Toynbee if his services were not useful. But she also states that he was not looking at the bigger picture, owing to which the plan failed. Although the details of her actual scheme are not disclosed in the episode, it feels as though Dave may just know what her vision is all about since he remarks that humans should not do the jobs of super-beings.

Plus, their cryptic conversation definitely makes it feel as though both know things about the paranormal world that none of the other protagonists do. Plus, Dave is responsible for the failure of JoJo 74’s plan. Had he not rolled out the 8G signal, Toynbee would not have died in vain. This makes us wonder why Dave helped out and whether there is some love lost between the two “super-beings.”

Inherently, we don’t think Dave and JoJo 74 are working together. Firstly, it is obviously her who has hacked into Dave’s office network to keep an eye on his every move. Clearly, she does not trust him. In the end, when the plan fails, she visibly has a sad look on her face. Au contraire, we see through her laptop screen that a man who resembles Dave is rotating happily on his chair.

Plus, if he were actually in cahoots with her, he would not have rolled out the 8G technology that spared everyone’s lives. As a viewer, you may get the impression that Dave is one of the villains alongside JoJo 74. However, when you actually stop and look at the facts, he isn’t necessarily a bad person. After all, what incentive did he really have to stop Toynbee from blowing off the heads of 200 people?

While we don’t deny that he is hiding something, we also don’t think that it is evidence of his culpability. (Even Elton and Astrid reveal their secrets only in the last few episodes.) When you actually mull over it, instead of implicating Dave, this conversation solidifies Jojo 74’s guilt. After all, she has been the puppet master all along.