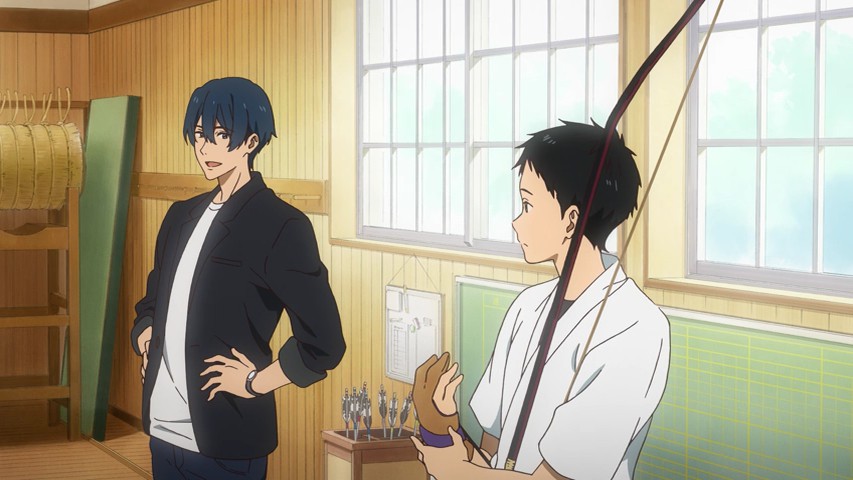 Tsurune: Kazemai Koukou Kyuudoubu is a Japanese sports anime television series which is based on a light novel series of the same name. Written by Kotoko Ayano and illustrated by Chinatsu Morimoto, the first novel in the series won a Special Judge Award in the Kyoto Animation Award competition in 2016, prompting Kyoto Animation to publish it on December 26, 2016. The novel has since done well for itself, and new chapters are being published even to this day.

A couple of years later, Kyoto Animation itself announced plans to adapt the light novel series into an anime television series, and Season 1 of Tsurune: Kazemai Koukou Kyuudoubu premiered on October 22, 2018. It was largely deemed to be a success by fans of the novels and new viewers alike, and since then, fans have been waiting to hear news on a second season of the show. Here’s everything we know about Season 2 of Tsurune: Kazemai Koukou Kyuudoubu thus far.

Tsurune Season 2 Release Date: When will it premiere?

Tsurune: Kazemai Koukou Kyuudoubu season 1 premiered on October 22, 2018 and ran for 13 episodes till January 21, 2019. Subsequently, an unaired special episode was released on March 3, 2019, much to the delight of fans. However, in spite of the show’s popularity, a second season has not been announced yet.

That being said, there’s no reason to get worried just now. Anime shows sometimes take years to renew and hence, there’s plenty of time left for Kyoto Animation to announce a second season. Further, since new chapters are still being published in the light novel series, there is definitely no dearth for source material for a second season. Considering this fact, and the fact that the show has the backing of an established anime studio like Kyoto Animation, we think that there’s a good chance that it will be renewed for a second season. Our best guess is that Tsurune season 2 release date could be sometime in 2021. However, nothing can be said for certain until Kyoto Animation makes an official announcement on the future of the show. We’re keeping our ears open for news on Season 2 of Tsurune: Kazemai Koukou Kyuudoubu, and we’ll update this section as soon as we hear something reliable.

You can watch ‘Tsurune’ on Crunchyroll with its original Japanese audio and English subtitles.

Tsurune: Kazemai Koukou Kyuudoubu revolves around the sport of archery – to be precise, not the kind of archery we see at the Olympics, but the Japanese martial art known as kyuudo.

The show follows a boy called Minato Narumiya who had a knack for archery in middle school. However, a certain incident in middle school caused Minato to lose his interest and passion in the sport, and he thought of giving it up for good.

Yet, after Minato encounters a mysterious man at an archery range in a forest, he becomes inspired to take up archery once again. With the support of his childhood friends, Minato thus joins his school’s archery club and with his new teammates – Nanao Kisaragi and Kaito Onogi – sets his sights on winning the prefectural tournament. The show thu follows Minato as he rediscovers his love for the sport and dives headfirst into it, hoping to hone his schools once again and emerge as the best in the school circuit.

Minato Narumiya: The main protagonist of the show, Minato is a first-year high school student with a knack for archery. Minato’s love affair with archery began when he went to watch an archery competition as a child with his mother. However, an incident during middle school causes Minato to lose his self-confidence, and he resolves to give up the sport once and for all. This all changes after a chance encounter with a mysterious man, and Minato joins his school’s archery club. As far as Minato’s personality is concerned, he is an active and outgoing person who can be surprisingly wild at times.

Seiya Takehaya: Minato’s childhood friend, Seiya serves as the president of the archery club at the Kazemai High School and the captain of the boys’ team. The son of a physician, Seiya is an intellectual and caring person and is also a skilled archer.

Ryouhei Yamanouchi: Another of Minato’s childhood friends, Ryouhei is a bright and cheerful lad who is as friendly as a dog. While Ryouhei he had grown up with Minato and Seiya during childhood, he got separated from them during middle school as he was enrolled into a different one. Ryouhei is also shown to be rather perceptive, and can sense what others are feeling. He is also part of the Kazemai High School Archery Club.

Nanao Kisaragi: A handsome boy with curly hair, Nanao has a princely temperament and is always positive in life. He is also part of the Kazemai Archery Club and in spite of his confident and outgoing personality, he is secretly insecure about his short height.

Kaito Onogi: Another member of the Kazemai Archery Club, Kaito is Nanao’s cousin and, like Minato, he shares a love for archery. A bright boy with sharp eyes, Kaito is often mistaken to be a soccer player owing to his tanned skin. He also frequently argues with Minato, in spite of them having similar interests.