The following article contains major spoilers to the 1992 film “Twin Peaks: Fire Walk With Me” and the television series “Twin Peaks” (1990-1991).

When David Lynch‘s followup to the hit ABC series “Twin Peaks” premiered at the Cannes Film Festival, it was destined to fail. The show had been cancelled after a highly disappointing Season Two, that saw a marked dip in quality. Lynch, who had never intended to solve the central mystery of who killed Laura Palmer, departed the show after the network forced the writers to reveal the identity of the killer. The show then swiftly lost steam (and its incomparable ratings) and it was not until the season finale, directed by Lynch, that it somewhat resembled its old, quirky, mysterious, suggestively dark self. That episode, as is well known, ended with a cliffhanger unlike television had ever seen.

Thus, when it was announced Lynch would be directing a feature on “Twin Peaks”, fans of the cancelled TV show awaited a conclusion that was never going to come. Lynch had decided the film would be a prequel to the series, telling the story of the last days of Laura Palmer. That itself didn’t seem like an endearing idea. Fans of the show wanted to continue with the story of Cooper back from his trip to the lodge and audiences that had gotten exhausted from the show didn’t want anything to do with these characters. 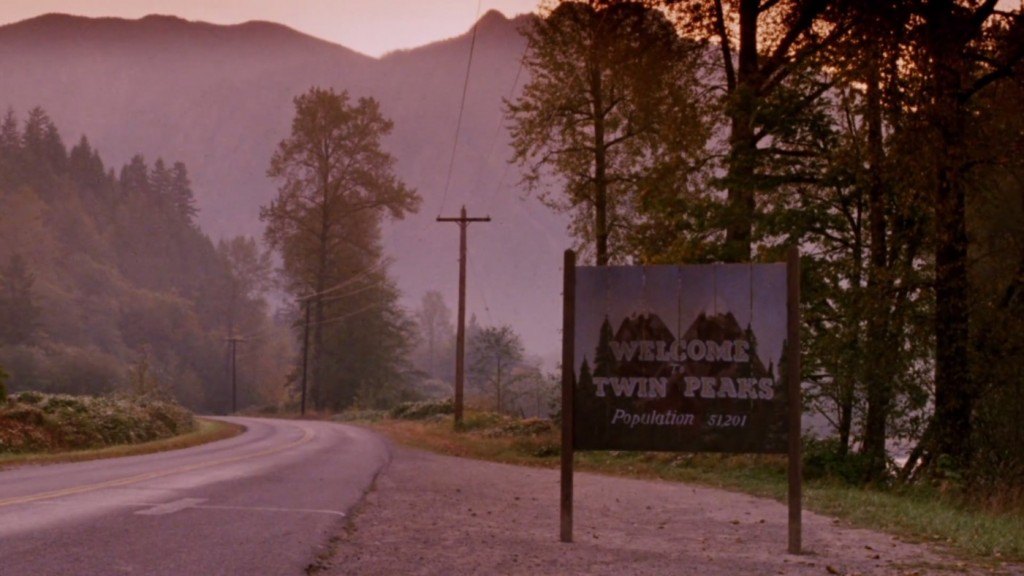 At the 1992 installment of the prestigious film festival, the movie was met with scathing, relentless criticism. Booing at the press screenings is hardly something unheard of, or even something to measure a film’s quality by, but Lynch, composer Angelo Badalamenti and co-writer Robert Engels were booed at the press conference. The reviews that followed were just as harsh, if not more. Vincent Canby of “The New York Times” said, “It’s not the worst movie ever made. It just seems to be.” Lynch was so disheartened, he once remarked, “The big news was that I’d finally completely killed ‘Twin Peaks’ with this picture.”

That initial response to the film is both understandable and perplexing to me. We know the ending to the story. Laura Palmer dies. There’s no escape from that horrific, tragic coda. Many critics commented that Lynch should have kept Laura Palmer dead. But what’s confusing is their failure to see how mysterious her character, or more importantly her perception was. For Lynch, and for many of us who understood his bleak and heartrendingly grand vision beneath the quirkiness and the humor of the suburbia, ‘Twin Peaks’ was about Laura Palmer, the dead girl who saw everything for what it was, and still managed to become an irreplaceable part of the community.

Relation With the Show 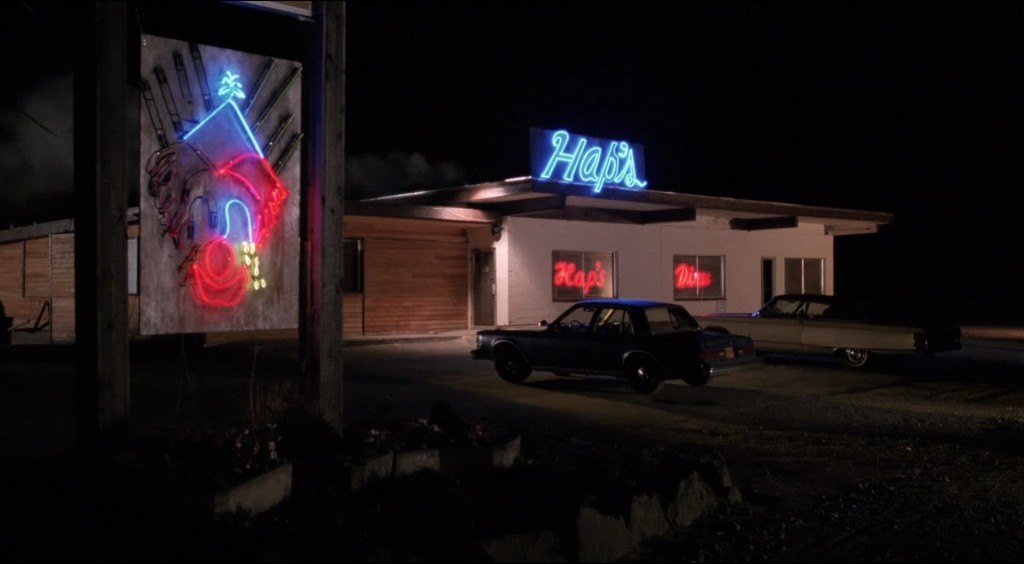 The film has a strange, unalienable relationship with the show. The film, very tellingly, begins with a shot of a television set being slashed with sledge hammer. It differs from the TV show in almost all aspects: tone, atmosphere, humor and purpose. While everything in the show is in the absence of Laura’s troubled presence, it is haunted by it constantly. Her dark life shadows the town’s off-kilter, whimsical charm. We discover the secrets of her life gradually and while always in awareness of the inherent desolateness of it all, we are never confronted with it.

In the film, on the other hand, you are blinded with the misfortunes of Laura. That empty seat that is the source of Donna Hayward’s agony in the pilot episode, belonged to a real person, who sat there, in even greater pain; her identity falling apart in front of her eyes. A real person, who was sexually abused since she was 12. In the show, we are told it’s the ambiguously supernatural BOB, who lives inside Laura’s father Leland, who is the perpetrator of that abuse. There was a clear distinction between Leland’s innocence and BOB’s devilishness. In the film, we get no clear answers.

Leland’s motivations in the film are much more opaque. It’s hard to gauge where Leland ends and BOB begins. “BOB is real.”, Laura tells Harold Smith. To her, the monster exists. And when it is revealed to her that it resides in her father, the devastation is boundless. It consumes her entirely, plunging her deeper into the dark. In the series, we know all the facts. In the film, we are made to feel them until they scar us. Laura’s desperation is no more the source of an investigation. It is a source of pure, harrowing sadness. 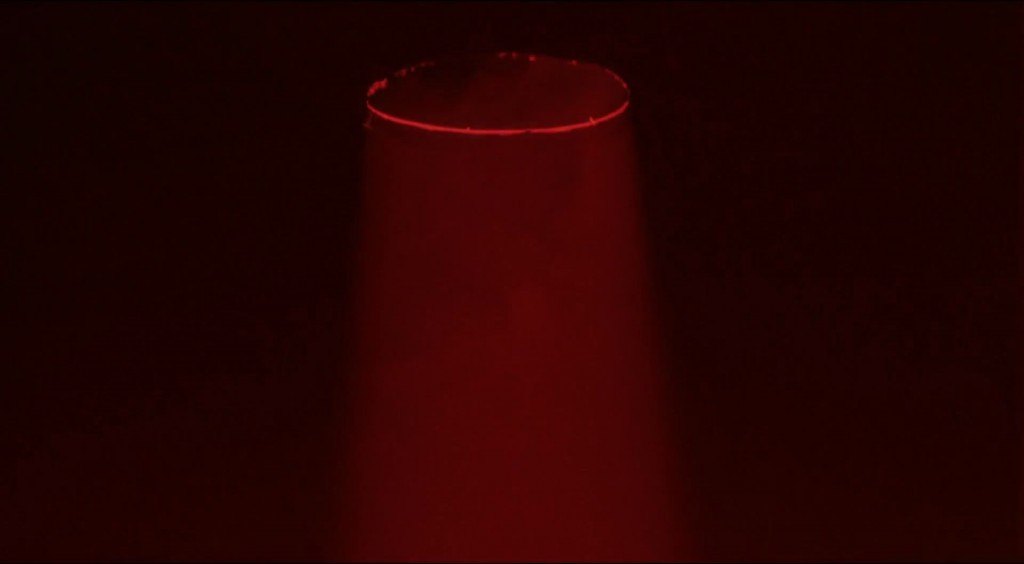 The film’s first half-hour is as cold and discomforting as anything Lynch has ever done. It very nearly doesn’t work, unless you see it as an effort distance itself from the TV show. Here, we begin with the murder of Teresa Banks in a place called Deer Meadow, that is a darkly comical flip on the town of Twin Peaks. The people in this place are a callous collection of idiots as compared to Twin Peaks’s kind, gentle folk. We follow FBI Agents Chet Desmond and Sam Stanley across the town as they investigate the murder and we are already feeling as if we are in a somewhat similar, yet entirely uncharted territory. The aesthetic and the tonality suggest that while we are in the same world, we are looking at it from an entirely different perspective. Even the diner in this town in unbearably off-putting. “You want to hear our specials? We don’t have any.”, the waitress at the place remarks with nearly disgusting wryness. It’s hard not to miss Norma Jennings and her saccharine smile.

What follows this is a weird, seemingly misplaced sequence at the FBI headquarters with Gordon Cole, Dale Cooper, Albert Rosenfield and a long absent FBI Agent Philip Jefferies (played with indescribable, singular peculiarity by David Bowie). Cooper here is completely devoid of his witty, comforting flair, and frankly, looks lost. Perhaps that’s how Lynch wants the audience to feel. Then the film shifts tone to jump to a year later, and the sign welcoming us to Twin Peaks appears as Badalamenti’s iconic Peaks theme wells up in the background. We feel like we’re back home, but that oddity of that initial half-hour is still preying on our mind, and it should, because this will look nothing like home once Lynch starts to unravel his ideas in front of us.

For the rest of the film, we center on Laura Palmer. Her joyless, frightening, starkly troubled life forming the anguished core of the movie. Scene after scene we see the off-the-charts brilliant, enlivened Sheryl Lee bringing all the horrors to unforgettable life. Her face registers emotions with a humongous, heartbreaking intensity. Her Laura seems to be flirting with the possibility of happiness, but also seems to know deep in her heart, that the path she’s compelled to be on as a victim of remorseless, evil, abuse can only lead to her own ruin. “Your Laura disappeared.”, she tells the unassuming James, and you can almost see that enchanting smile flitting behind her forlorn eyes; eyes that don’t know hope anymore. 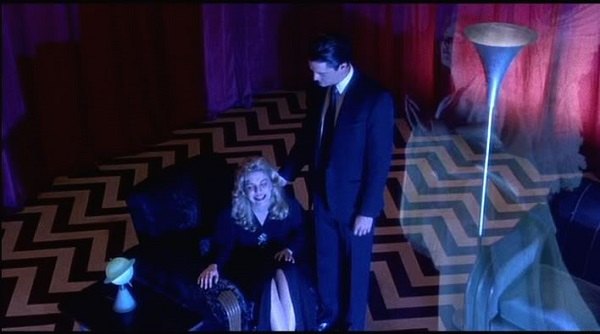 When she’s mercilessly killed by her own father, Lynch pulls us into the unflinching darkness of the trees we only saw through the windows of Cooper’s room at The Great Northern. We see a man possessed by an intangible evil that feels all-consuming in its greatness, and an innocent girl, victim to incessant abuse, meeting her inevitable end. And in that final scene, where Laura sees the angel above her as she is comforted by Dale, the film completes our journey to the town of Twin Peaks (even though a revival of the series has taken us back to it). Lynch, I imagine, offers as poignant a dream to Laura as horrifying her nightmare was. She always believed that BOB was real, and in her contented smile at the end, we realize that somewhere inside, she always believed the angel was, too.

Reviled at the time of its initial release, “Fire Walk With Me” deserves to be appreciated more for what it is: a film, separate from the television series that defines the horrors lurking beneath the peaceful surface of the American suburbia. Flawless in its sound design and score (the highlights being the “Pink Room” scene with its muffled, subtitled dialogue and the final scene) as well as the operatic, Oscar-caliber work of Sheryl Lee, “Fire Walk With Me” is a spectacular achievement in the canon of David Lynch’s investigation into small-town America, and it’s time it was recognized as such.