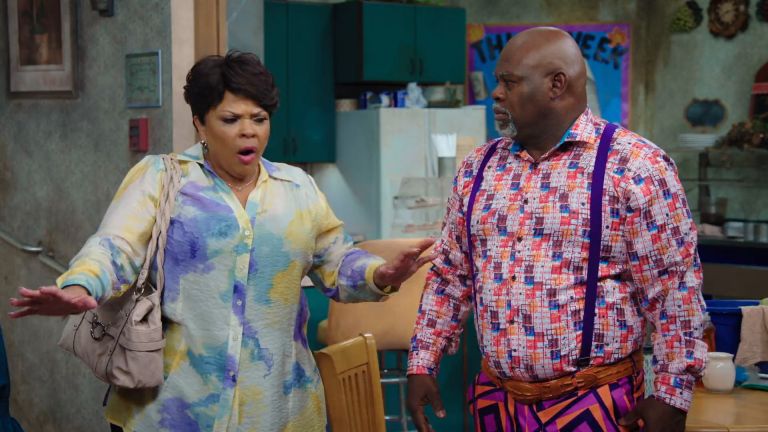 ‘Tyler Perry’s Assisted Living’, BET’s family sitcom, revolves around the main characters featured in ‘Tyler Perry’s Meet the Browns’. Starring David Mann, Tamela Mann, J. Anthony Brown, Na’im Lynn, Courtney Nichole, Tayler Buck, and Alex Henderson, the story introduces us to Jeremy (Lynn), who loses his job and moves to the rural backwoods of Georgia. He is accompanied by his family and they want to help his eccentric grandfather Vinny (Brown) in revamping a run-down old-age home. Vinny had made a foolish investment in the past when he purchased this establishment but now, heaves a sigh of relief after he gets a visit from needy investors, Mr. Leroy S. Brown (David Mann) and his daughter, Cora (Tamela Mann).

‘Assisted Living’ premiered to solid ratings on September 2, 2020, with two back-to-back episodes. In the series pilot, Jeremy and his wife Leah, accompanied by their two teenage kids, visit Grandpa Vinny. Vinny is currently running an abandoned, dilapidated assisted living facility in Atlanta. As soon as the family enters the establishment, they are shocked at its pathetic condition. But they are more surprised after meeting the people living there. Slowly, Jeremy and Leah try to get their kids adjusted to their new living arrangements.

Now, the show is all set to release its next double dose of episodes. And here is everything you need to know about ‘Tyler Perry’s Assisted Living’ episode 3 and 4.

Episode 3 is titled ‘Captain Crunch’ and it follows Jeremy as he tries to convince Vinny to start renovation on the run-down property. Sandra and Philip try to find out why Jeremy and Leah seem to be in distress. Philip uncovers some information that reveals why Jeremy had decided to move to rural Georgia.

Episode 4 is called ‘Assaulted’ and it begins with Jeremy thinking that he might have been a little too heavy-handed with Vinny. An incident happens at the assisted living facility and Vinny calls the police to intervene and handle the situation. Leah, however, tells Vinny that cops can end up finding more than he intends them to discover.

You can check out a preview from the upcoming episodes below:

Jeremy and Leah know how to really keep it real. 2 New episodes drop next Wednesday at 9/8c. #AssistedLivingBET pic.twitter.com/HR6aCX8kpa

Where to Stream Tyler Perry’s Assisted Living Episode 3 And 4 Online?

‘Tyler Perry’s Assisted Living’ drops two back-to-back half-hour episodes every Wednesday on BET from 9 pm ET to 10 pm ET. So, if you have a cable subscription for the channel, you can catch the episodes as soon as they are released on your tv screens. Episodes can also be watched online on the BET official website. Without a cable connection, you can live-stream the show on Fubo TV, Sling TV, Directv, and Philo TV. Most of these platforms offer a 7-day free trial, following which you have to select a subscription package.

Read More: Where to Stream Tyler Perry’s House of Payne?