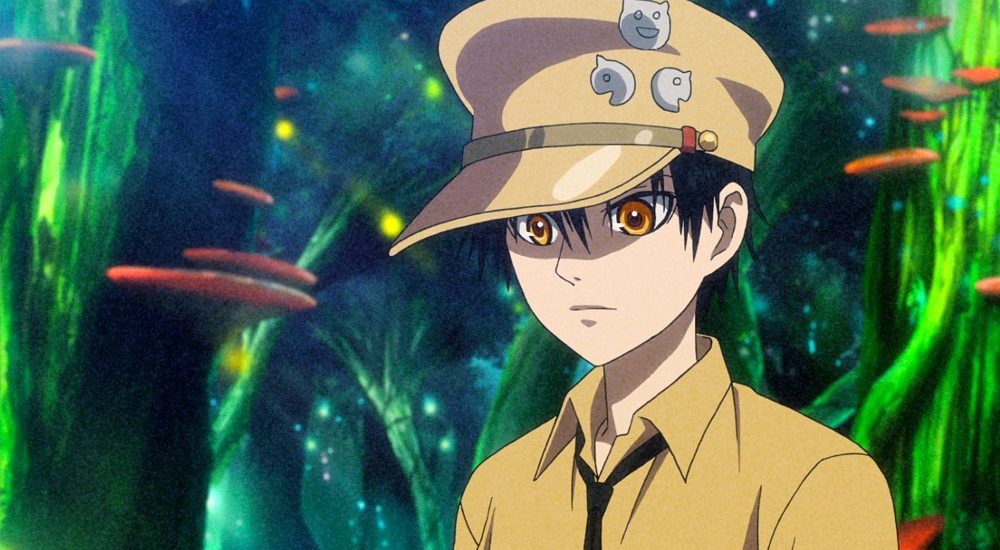 There is a very famous saying that goes, “the very basic core of a man’s living spirit is his passion for adventure” and that’s pretty much what this anime is all about. In the past, many anime shows like ‘Made in Abyss‘ and ‘Hunter X Hunter‘ have explored man’s fascination for adventure in the best possible ways and now, ‘Ultramarine Magmell’ seems to be treading on a very similar path.

Each episode of the anime brings a whole new standalone adventure where the main protagonist sets out on a quest to rescue new clients in the dangerous lands of Magmell. Defying the common norm where most action anime rely on the typical “go kill the monster” trope, ‘Ultramarine Magmell’ brings in some deep ethical and moral messages along with its action. For the most part of it, the show has no fixed plot but is still quite enjoyable if you can appreciate the individual stories of all of its episodes. Compared to other recent survival-based fantasy anime shows like ‘A.I.C.O Incarnation‘ and ‘7 Seeds‘, Ultramarine Magmell’ is quite promising in a lot of ways and definitely deserves a shot.

Ultramarine Magmell Season 2 Release Date: When will it premiere?

‘Ultramarine Magmell’ season 1 premiered on April 7, 2019 and with a total of 13 episodes, it ended on June 30, 2019.  Produced by the renowned Studio Pierrot Plus, which is also known for its work in anime like ‘Tokyo Ghoul: Re‘ and ‘Beelzebub‘, the anime received a worldwide premiere on Netflix on October 10, 2019. Netflix streamed all 13 episodes of the anime on the same day in an ONA format and if everything works out well, the series might even receive a renewal in the future.

Now when it comes to its source material, a total of 8 volumes of it have been published so far. But considering the fact that the last four volumes of the manga were published recently in the months of March and April, 2019, it is pretty obvious that these volumes are not a part of the first season. The end of season 1 is partially conclusive but now that a lot of content of the manga has still not been covered, the chances of getting season 2 are fairly high. As of now, no confirmations have been made regarding this by the Studio, but if renewed, ‘Ultramarine Magmell’ season 2 can release sometime in April, 2020.

The English dub of ‘Ultramarine Magmell’ is available on Netflix.

After a huge landmass called ‘Magmell’ suddenly appears, several people set off on a journey to explore these lands. Full of lush green landscapes and unknown natural resources, this new continent is like a dream come true to for every explorer out there. But with its vast array of flora and fauna, there also several dangers that lurk in each corner and in order to sustain all of these explorations in such a dangerous environment, something really needs to be done.  This is when specialized wildlife experts, known as “Anglers”, are introduced who use their skills and knowledge to conduct rescue operations for all the lost explorers. ‘Ultramarine Magmell’ follows the story of one such “angler” named Inyou, who uses his advanced survival skills to hunt down explorers along with his assistant, Zero.

Inyou is the main character of the series who is a very young boy. But being a kid never really stops him from being one of the most successful Anglers out there. Apart from conducting rescue missions, he also runs a lodge that serves as a residence for Anglers. He is extremely skilled when it comes to survival and also possesses a unique ability “Rakt” which gives him immense physical strength. He is completely dedicated to what he does and is usually seen with a carefree relaxed attitude towards everything. He really cares for the ones he loves and shows a high level of professionalism when rescuing his clients. In appearance, he seems to have a fairly average height for his age and a lean build. He has spiky jet black hair with deep yellow eyes and is usually seen in his khaki-colored Angler uniform.

Zero is a cute young girl who works as Inyou’s assistant and supports him during his adventures by using her bountiful knowledge of Magmell and her probe known as ‘Imagine Rakt’. She is not as experienced as Inyou when it comes to rescuing their clients and has not even visited Magmell as much as him. But she is still quite powerful for her age and her skills are way above average. Just like Inyou, she shows a whole lot of professionalism during work and in her normal life, she can often be very clumsy. When it comes to her appearance, she has long flowing blond hair and big green eyes. She usually sports a pair of headphones on her head and wears a white t-shirt over a full-sleeved brown shirt.

Emilia is another primary female character of the anime who belongs to the weapons and research development department of the Gokuhoshi Company. Compared to most other characters, her Rakt abilities are fairly average but she always shows a lot of mental strength and will power. One big reason why she starts working with Inyou is that her own father is a rescuer. She has long blond hair that she keeps tied up into a ponytail with a pink hairband. She has beautiful green eyes and is usually seen with a faint smile on her face.

Shuuin is one of the secondary characters of the anime who has a very mysterious personality and serves as Inyou’s master. He also sports a dark khaki uniform and almost half of his face is usually covered with a cap that he wears all the time. He has sharp white hair and always has a very stern expression on his face.

Darwin’s Game E7: Where And When To Stream

Boruto E145: All The Details You Need To Know

One Piece E923: Where And When To Stream

Kyokou Suiri E7: All The Details You Need To Know