Where Was Under the Autumn Moon Filmed? Who is in it? 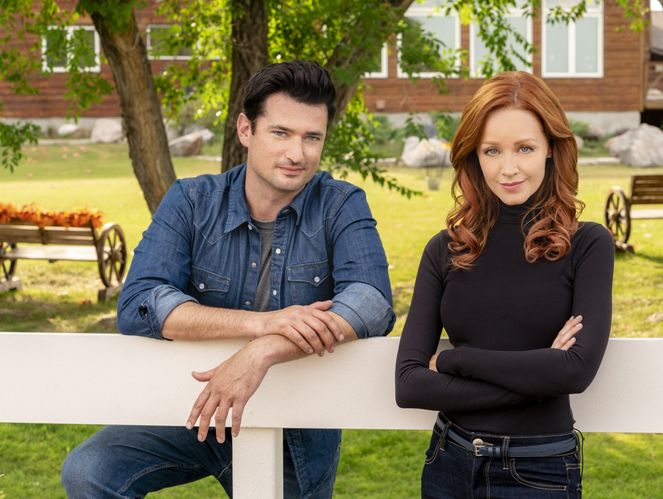 Sometimes people get so lost in ambition, that they forget to loosen up and live life a little. Overwork is not really success if you cannot enjoy the fruits of your labor. That is the reason a healthy work-life balance is essential for a happy life. Hallmark’s ‘Under the Autumn Moon’ explores this further with a highly ambitious protagonist. Apart from that, the movie also employs the classic romcom conflict of choosing between love and professional ambition.

Hallmark’s tagline is “the heart of TV” and that couldn’t be more apt. The network consistently presents a stream of enjoyable movies and television series that re-instill one’s faith in love. They prove to be truly uplifting and positive as they can make anyone feel hopeful once again, despite their cheesy, candy-coated nature.

‘Under the Autumn Moon’ revolves around the character of Alex who is working at a place she had always wanted to work at. However, there is always some tiny thing missing from her life, she feels, and Alex cannot put her finger on what it is. Well, she only realizes what is missing when she is sent on a professional task to a ranch. Her boss wishes to buy this particular ranch and she is asked to scout the place.

One of the ranch’s owners is Josh and he does not want to sell the place. He wishes to maintain the ranch’s historical value. Hence, if he does agree to sell it, that is his condition. He makes Alex experience the magic of the ranch and she finally manages to loosen up a little. However, when her boss arrives, she might have to choose between her professional responsibilities and her newfound love for Josh. What will triumph? Well, there is only one way to find out.

Under the Autumn Moon

‘Under the Autumn Moon’ is primarily set in Harmony Ranch. This is the name of Josh’s ranch in the movie and where most of the action takes place. The setting is quite important for the film plotwise. Hence, it is natural for audiences to wonder where the movie was shot. Was it actually filmed in a ranch?

Well, ‘Under the Autumn Moon’ is a movie that was entirely shot in Canada. Most Hallmark movies, in fact, are filmed in Canada. This is mostly due to financial reasons. Canada offers lucrative tax credits to productions that opt to film in the country. This helps bring down filming costs considerably while managing to bring in employment opportunities for Canadian locals.

To be more precise, ‘Under the Autumn Moon’ was shot in Winnipeg, Manitoba. The cast seemed to have a rather fun time while filming since their co-stars were multiple, adorable animals from Six Pines Petting Farm. Have a look:

Six Pines Petting Farm animals – play a role in a Hallmark Channel Fall Harvest that will feature Six New Original Movies this fall. To be aired Oct 13, 2018 on the Hallmark Channel "Under The Autumn Moon"

best day on set ever?! another amazing co-star!

me & my llama. another four legged costar.

Here are some other photos from the film:

this saturday (10/13) i hope you’ll join me and this lovely group of people for a good old fashioned happy ending as a part of @hallmarkchannel #FallHarvest festival. 9pm ET/PT 🍁🎃 i’ll be live tweeting if you want to join me! #UnderTheAutumnMoon

thank you all for watching #UnderTheAutumnMoon last night! i hope you liked it! @hallmarkchannel

Under the Autumn Moon Cast: Who is in it?

The cast of ‘Under the Autumn Moon’ is led by Lindy Booth who plays the character of Alex. Some of the other projects that she has been a part of include ‘Dawn of the Dead,’ ‘Cry Wolf,’ and ‘The Librarians.’ Opposite her, the character of Josh is essayed by Wes Brown. Other cast members include Natalie Lisinska, Cherion Drakes, and Dean Redman.