When X-Men released in 2000, it breathed life into Hollywood’s one of the most oldest yet dormant love affair: the genre of superhero movies. Since the silent era, Hollywood had been dabbling into this genre. One of the oldest superhero movies was Douglas Fairbanks’ ‘The Mark Of Zorro’, based on the famous masked vigilante. It was a smashing hit as the audience appreciated the Robin Hood-esque protagonist who fought oppression of the poor. While this one turned out well, it paved the path for others to follow. But not everyone had the same luck.

Barring a few, most of the superhero movies sunk without a trace. A majority of them got caught up in the new wave of cinema that swarmed into Hollywood via the modern filmmakers. But the genre of superhero movies, like the characters it portrayed survived this onslaught and silently continued to thrive till 20th Century Fox, Marvel and DC took notice and as they say, the rest is history. Among the stalwarts such as Superman, Batman, X-Men and the entire horde of Marvel heroes, we bring to you the list of most underrated superhero movies, which have stood the test of time. Read on and hey, Excelsior! 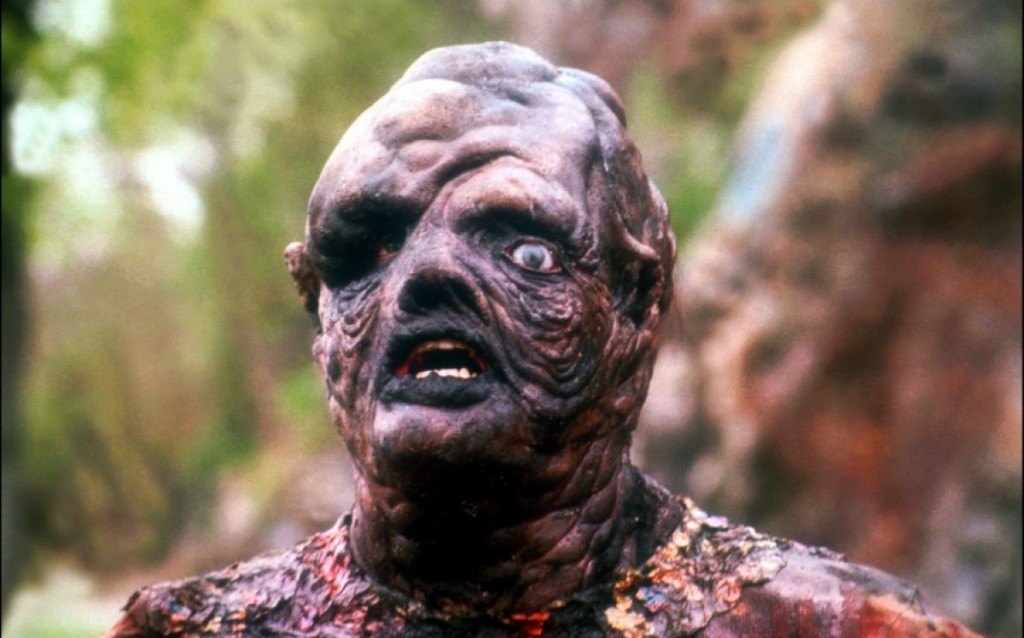 The first one on this list is a B-grade action horror fest, laced with women in skimpy clothing and gut busting fight sequences. In short, it’s so bad that it’s good !! ‘The Toxic Avenger’ is the story of a nerdy janitor who achieves super human powers, after falling into a vat of toxic materials. While the town is infested with ruffians who terrorize the citizens, he takes it on himself to cleanse the city. A sleazy gore-fest, initially this was ignored by moviegoers, only to turn into a cult classic, spawning sequels and even a successful musical. 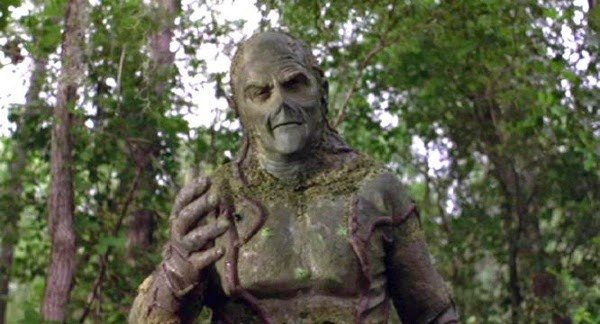 Government Agents, Scientists, Soldiers, Master Criminals, Secret Formulas, Monsters and Midgets. They all feature in this Wes Craven directed action adventure movie, based on the eponymous DC comics character. A scientist working on a secret project, while protecting his invention from an evil competitor, gets doused in it and while running, falls into a swamp. What comes out of the swamp is an enraged monster, looking for vengeance and perhaps a little love. Made on the similar mould as that of ‘The Toxic Avenger’, this movie was well received by the audience for its action sequences and entertaining storyline. Buoyed by its success, the studio came up with multiple sequels later. 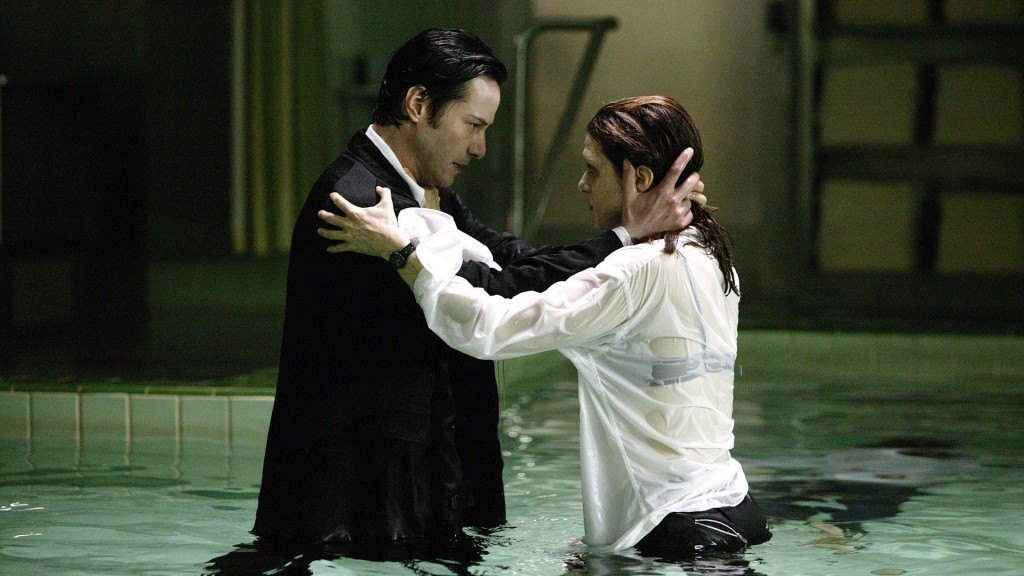 A man who can see angels as well as demons, condemned to hell till eternity. That’s how Alan Moore conceptualized John Constantine. But he didn’t like the way it was portrayed on the silver screen. So he refused to be credited. But all said and done, ‘Constantine’ is a fine piece of work involving mythical creatures and the centuries old tussle between God and Satan. It’s a well told story, with sleek special effects and a post-‘Matrix’ Keanu Reeves. Well, what else do you need ?? This one is not the forgettable outing by Sylvester Stallone. Based on the 2000 AD comics character Judge Dredd, the story is set in a post-apocalyptic world where the only mean to law and order are the Judges. Karl Urban plays the titular character who gets on the wrong side of antagonist Ma-Ma, a prostitute turned drug overlord, played by Lena Heady. Two things that stand out for this movie are the spectacular effects of the drug Slo-Mo, which brings down the perception level of the abuser to the minimum and the other one is that you never get to see Karl Urban’s face in the movie, which is always covered by his helmet. This emphasizes the fact that the judgement is impartial and is faceless. 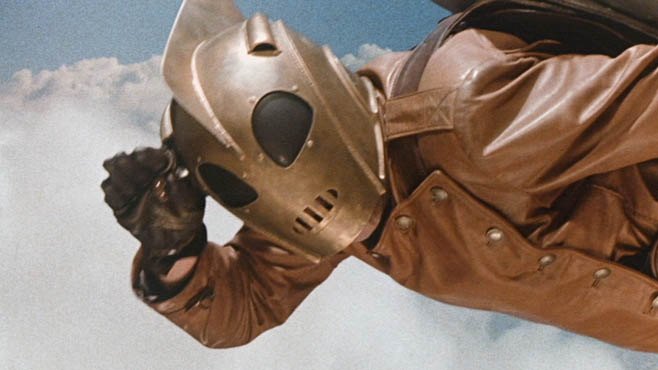 A stunt pilot discovers a jet pack in an accident which when turned on, makes the user fly. As he starts using it to help people in distress, he realizes that there are government agents, mobsters and even Nazi operatives who are waiting to get their hands on this ingenious invention. It’s a typical feel good action fest about a metal face mask wielding man flies using a jetpack propellor came way before the cinematic version of another flying metal man belonging to Marvel comics. An old school spy story with a little patriotism where in the climax, the FBI and the mobsters join hands to fight off the Nazi invaders, became a cult classic on home videos. A superhero, pitch drunk and oblivious to the fact that he regularly causes damage to the public properties goes for an image makeover. But there’s another superpower in the vicinity, the yang to his yin. The catch is- While the two remain together, they lose powers. Will Smith plays the eponymous character with style and brings the house down with his antics. Watch out for the scenes between him and Jason Bateman. This movie was a global blockbuster as it showed a new side of the typical superhero fare. Starring Brandon Lee, in his final tragic appearance, ‘The Crow’ is a spectacular work of visual imagery. A dark revenge drama, where the dead lover comes back from the grave to avenge his and his girlfriend’s death, in a gothic version of his persona, accompanied by a crow, which becomes his call sign. Brandon Lee suffered an accidental gun shot during the film making, which led to his death, sharing an eerie similarity with ‘The Dark Knight’ actor Heath Ledger. The movie was universally praised by the critics for its style, story and a tremendous background score. The movie spawned multiple sequels, which unfortunately could never reach the crescendo of the first one.

Perhaps M. Night Shyamalan’s one of the finest works till date, ‘Unbreakable’ is the story of a man looking for answers for his unimaginable powers. When a horrific train accident kills everyone on board, except one man who escapes without a scratch on his body, he starts looking for answers. To aid him, another mysterious person joins him in his quest who helps him to understand his powers as well as its importance to his existence. The movie questions the age old fact that whether good and evil need each other to exist. Bruce Willis and Samuel L Jackson lead in this good vs bad battle. It’s said that Sam Raimi wrote his own version of superhero, after being refused the rights of Batman. ‘Darkman’ is the story of a scientist who gets badly disfigured in an acid attack. To avenge himself, he uses one of his inventions of creating synthetic mask resembling any face on earth for 100 minutes. Sam Raimi’s writing was heavily influenced by Batman. The scene where one of the informants pleads for his life as he has told him everything, Darkman calmly says:“I know you did…But let’s just pretend, you didn’t…” feels like a little tribute to the Dark Knight himself. Liam Neeson was pretty new on the circuit when he did ‘Darkman’ and he did a swell job. Watch it if you haven’t. 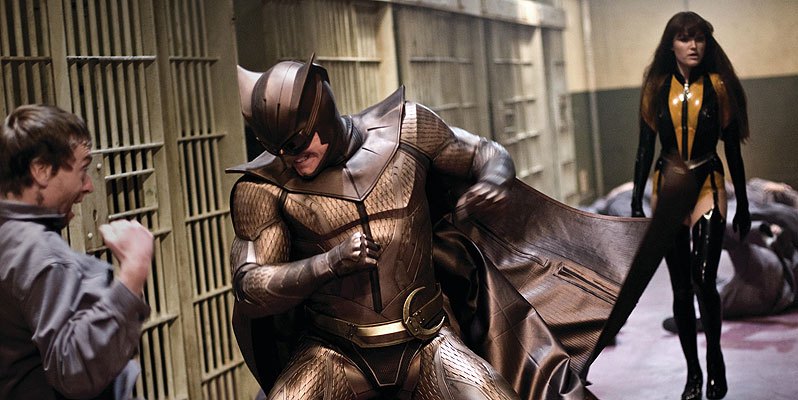 All superheroes have one thing in common: national security is the supreme cause. They watch you for your own safety. But who watches the watchmen? Based on an earth where post-cold war tensions pit two nuclear superpowers at loggerheads, it’s a fantastic take on superheroes. Created by Alan Moore, who famously fell out with Warner Bros. on the creative content, ‘Watchmen’ is the ultimate superhero movie. When all superheroes retire or get unmasked due to a Govt. initiative, somebody starts killing them one by one. This brings them together and while looking for the killer, they stumble upon a fact that will probably end up in the annihilation of the very world they live to protect. A stunning work of visual imagery and a story that forces you to think otherwise, ‘Watchmen’ is the story of ‘the times they are-a-changin’ !!